Samsung has invited members of the press to a special Unpacked event in New York City on March 29, when the company is expected to unveil the Galaxy S8.

The event date matches what VentureBeat reporter Evan Blass revealed in January, and Samsung is said to be releasing 5.8-inch and 6.2-inch versions of the phone, both with QHD Super AMOLED screens. These devices will also feature a 12-megapixel rear camera and an 8-megapixel front-facing one; iris scanning, which debuted on the now-defunct Note7; and quite possibly a Google Assistant service Samsung is calling Bixby.

The Samsung Galaxy S8 is expected to go on sale days after the announcement.

This is the #GalaxyS8 teaser Samsung will be showing in a few moments. Galaxy UNPACKED will be held on March 29, 2017. #MWC2017 pic.twitter.com/6kYY4G1LSZ

At last year’s Mobile World Congress, Samsung introduced the S8 predecessor, so it would be fitting to launch a new phone this week. However, citing concerns over testing, the company opted to delay a reveal — it introduced its Galaxy Tab S3 and Galaxy Book detachable tablets instead, along with an updated Gear VR headset with controller.

Also previously reported, there will be a difference in pricing between the S7 and S8 — at least in Europe, where the Galaxy S8 is expected to cost €100 more. 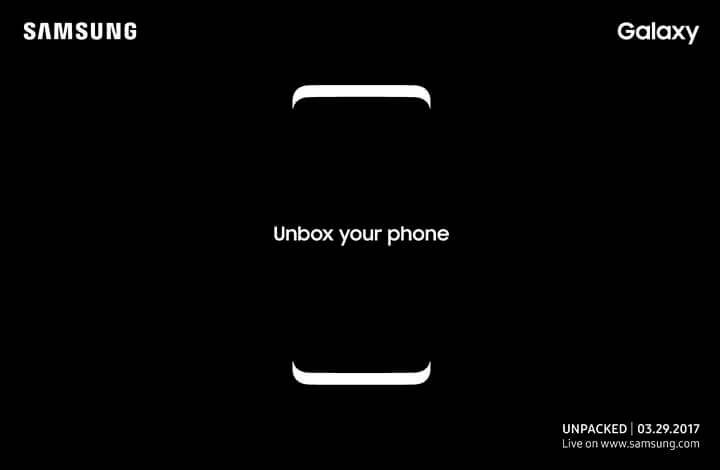 Above: Samsung sends out invitations to Unpacked in New York City, where it will unveil the Galaxy S8.