HTC hopes to give virtual reality a boost with its new Viveport Arcade software that makes it easier to run VR arcades.

PC-based VR systems are pricey now, but VR arcades are popping up around the world to give people an idea of what a 360-degree experience is like. HTC believes that adoption of VR is going to come just as much through engagement in these public environments as in the home. Companies, such as theater chain IMAX, are putting VR in theater locations, as are operators like Leke in China.

The Viveport Arcade is HTC’s proprietary content management and distribution platform for location-based entertainment, said Jenna Seiden, head of content acquisition for Viveport, in an interview with GamesBeat.

“We can track usage and playtime directly and share that with the operator,” Seiden said. “The operators get a library of VR content that they can use.”

Commercial arcade operators can download the software to their venues, allowing them access to a library of legally acquired content, which they can configure across their Vive stations via a centralized host client tool. Through the backend, HTC accurately tracks usage and shares the revenue received from operators with the developers.

“The commercial operators are like traditional arcade owners or those with Internet cafes,” Seiden said. “They can be chains like Dave & Busters and movie theaters that are using VR systems in their lobbies.”

HTC built the software to serve as a turnkey method for developers to distribute and monetize their content to global physical locations like arcades, Internet cafes, theaters, and shopping malls — and for operators to have a complete system to surface great VR content to their customers. HTC takes the burden off of both parties to identify, secure, and safely distribute the content and manage payments through this centralized system.

The VR arcade program was initially announced in November 2016, and it currently has more than 500 titles in its content library.

Developers can opt in to the Viveport Arcade program with their games and experiences through the main Viveport developer console. HTC evaluates the titles per its content submission guidelines and reviews them for optimal use in public venues.

Developers may opt in with the same build that is available to consumers for home use, but developers are encouraged to submit a build only for commercial use. 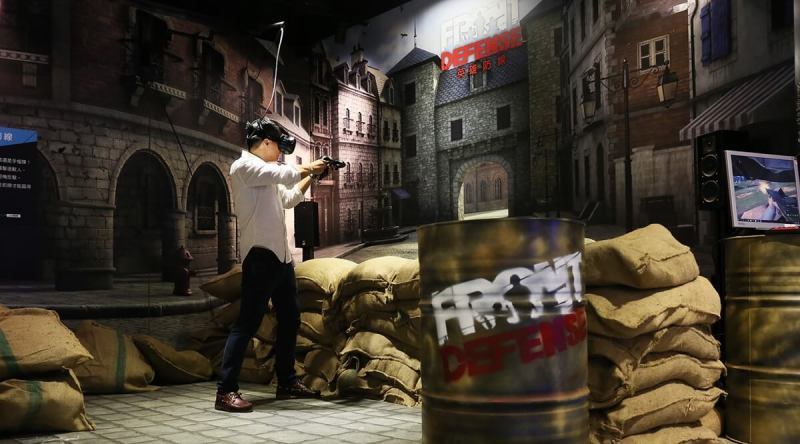 Games are a top focus, but other immersive experiences are becoming popular as the industry grows. The experiences that often work in a home environment may be a perfect fit for certain commercial locations, but sometimes, a more custom “arcade” version works better. This may include different ways to approach tutorials, gameplay sequences, and other features to get people into the experience faster and optimize replayability.

HTC is running trials with 20 operators worldwide, and the Viveport Arcade platform will be available globally in April.

Operators will pay HTC for points, which equate to a certain amount of time. As the consumer plays the Vive titles, points will be deducted from the operator’s total point reserve. As an example, the rate in the US is $10 for 1,000 points. Those 1,000 points give the operator a total of 60 minutes of playtime.

HTC believes there will be 5,000 HTC Vive station locations in the next year, and the company believes VR arcades will generate $100 million in revenues in the next year. HTC has its own Viveland arcade in Taipei, and it uses it as a showroom to demo VR experiences.