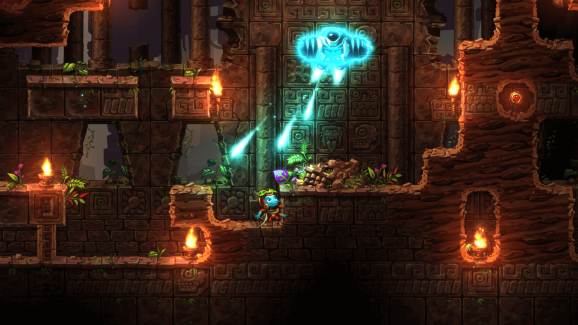 SteamWorld Dig 2 is out now on PC and console.

Nintendo livestreamed a showcase of Switch games due out this year from independent developers, and the publisher has simultaneously fleshed out the Switch’s library and the marketing around the console.

The Switch is getting more than a dozen major indie games this year. As part of its video presentation this morning, the company is promising a slew of indie games that include sequels to fan favorites, ports from other systems with new features, and entirely new games. These include the Metroidvania-like SteamWorld Dig 2, the Banjo-Kazooie spiritual successor Yooka Laylee, and the beloved life simulator Stardew Valley. Nintendo has even worked with many of the developers responsible for these games to add new features like local multiplayer cooperative gameplay, and it was clear that Nintendo wants to highlight that Switch comes with two JoyCons for built-in two-player action.

For example, Nintendo made a big deal out of Overcooked: Special Edition, a cooperative kitchen-management game, coming to the Switch. It’s also working with developer ConcernedApe to ensure that Switch is the first platform to get the multiplayer mode for Stardew Valley. And games like The Escapists 2, Kingdom: Two Crowns, and Yooka Laylee will also have cooperative multiplayer.

Each time Nintendo repeated the multiplayer feature, it was once again repackaging its core pitch for the console. The system works on the TV, on a table, or as a handheld, but those JoyCons make Switch the first system with two pack-in controllers in quite some time. And Nintendo wants people thinking about the potential of that, and it’s using Stardew Valley to sell that capability.

This may also help lessen the sting for people who go to get their system from GameStop this weekend for $300 and feel like Zelda is the only game. Yes, some people will get the motion-controlled party game 1-2 Switch as well as the co-op puzzler Snipperclips, but having a score of exciting indie games coming to supplement Breath of the Wild should help some people avoid buyer’s remorse.