Avatar was the most successful film of all time, generating $2.8 billion at the box office. The sci-fi tale told of the struggle on the planet Pandora, where the Na’vi, 10-feet-tall blue aliens, fight back against the humans who invade and destroy their native habitat in search of rare resources. James Cameron is planning four sequels, including one that is due to debut in December 2018.

The Ubisoft developers say they want to make a game that allows you explore the world of Pandora in all of its complexity. The company isn’t yet saying when it will ship the game. Ubisoft’s Massive studio is partnering with Fox Interactive and Cameron’s Lightstorm Entertainment.

Ubisoft’s Massive division originally built the Snowdrop engine for Tom Clancy’s The Division, which launched last year. The game engine enables developers to create a wide variety of games, from cartoon style games to highly realistic shooters, said Bjorn Lindberg, one of the creators of the Snowdrop engine at Ubisoft’s Massive studio in Sweden, in a press briefing at the Game Developers Conference in San Francisco.

Fox Interactive and Massive are working together to create a game that will continue to expand and deepen in the Avatar universe in exciting and innovative ways along with the films.

“James Cameron and Lightstorm Entertainment changed the way we think about immersive storytelling with the first Avatar, and the ambition that they have for the forthcoming films and this game is really inspiring,” said David Polfeldt, managing director, Massive, in a statement. “It’s a privilege to work with them and we’re honored that they’ve entrusted us to create an experience worthy of the Avatar name.” 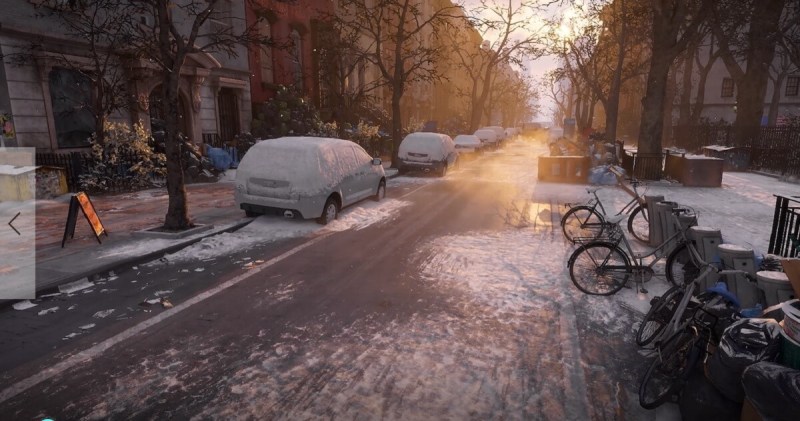 Above: A scene from The Division shows the realism of the Snowdrop engine.

The Snowdrop engine focuses on dynamic global illumination, environmental destruction and highly detailed visual effects. Ubisoft developers say they are in awe of the game and it’s a “fantastic and humbling experience” to create a game based on the film.

The game will be an open world that makes the environment of Pandora come alive an feel real. This is not the first time that Ubisoft has made an Avatar game. Back in 2009, then the film debuted, Ubisoft made a game based on the film that was widely panned.

“We are trying to create the feeling that Pandora is a real place, and the game should deliver that experience,” Lindberg said.

“What impressed me about Massive were the group’s passion for this project and the power of its Snowdrop engine,” said Cameron, in a statement. “I believe Ubisoft’s team at Massive Entertainment are absolutely the right partners to bring the beauty and danger of Pandora to life.”