One session at the Game Developers Conference consistently gets a standing ovation: the panel that celebrates diversity in the game industry.

The #1ReasonToBe panel has a rich history of being one of the most sincere and emotional sessions at the GDC. It started as a Twitter hashtag when women explained their reason for being the game industry.

Rami Ismail, cofounder of Vlambeer and an advocate for indie game companies, said that the session is about why developers make games, and this year’s batch focused on geographic diversity, with developers from around the world. Ismail said it was an honor to host the session. 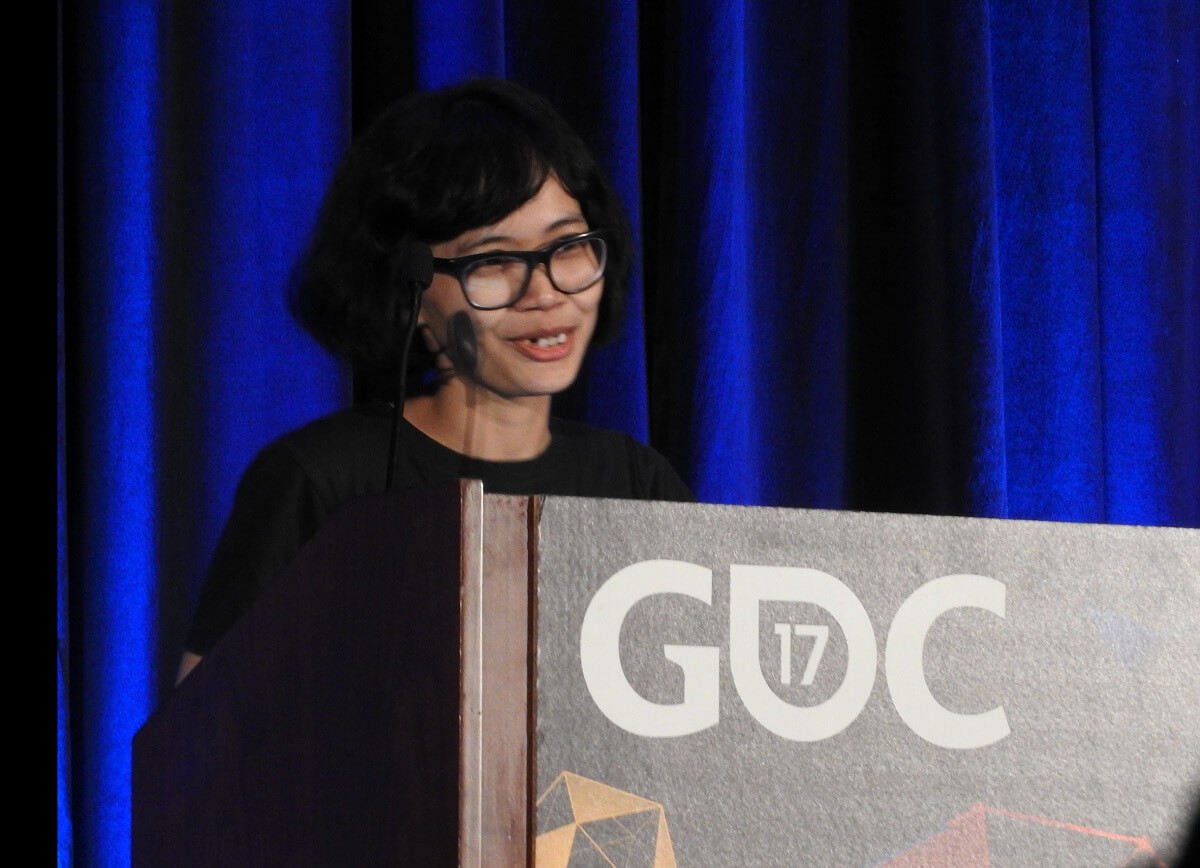 Above: Brigitta Rena Estidianti of Indonesia.

Brigitta Rena Estidianti of Indonesia described herself as a clueless game developer. She was a 2D artist and illustrator who didn’t know any game developers. But in college, she met with some kindred spirits who decided to form an illustration studio, Mojiken. They didn’t know how to make games, but taught themselves. Their first games were failures, and that taught Estidianti a lesson: Fail early. She went on and ignored her mother’s suggestions that she get married.

Over time, the group became a real game development studio. She ultimately decided to focus on games as a creative outlet. “Games are a medium of expression,” she said. “We can communicate our thoughts and what we believe through games.” 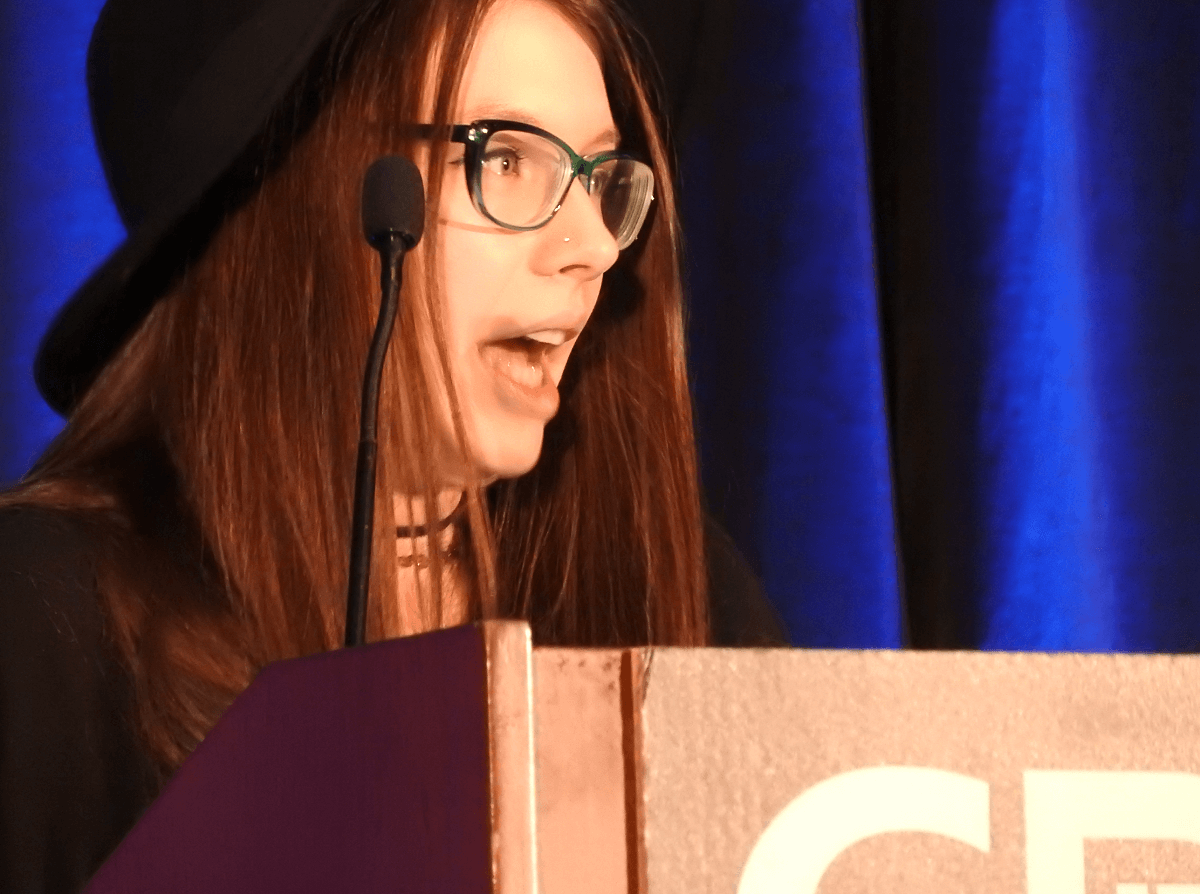 Above: Marta Ziółkowska of Poland.

Marta Ziółkowska of Poland started out wanting to be an artist. She switched to computer programming for the money and was the only woman in her class. She got bullied, but she continued. After she got out, she couldn’t abide working in a big company. So she went to game conferences and switched careers.

She said, “My first games were total failures.”

Her reason to be in the game business? She gets to do what she loves. She followers her heart. She has the freedom of creativity, and she is surrounded by friends. 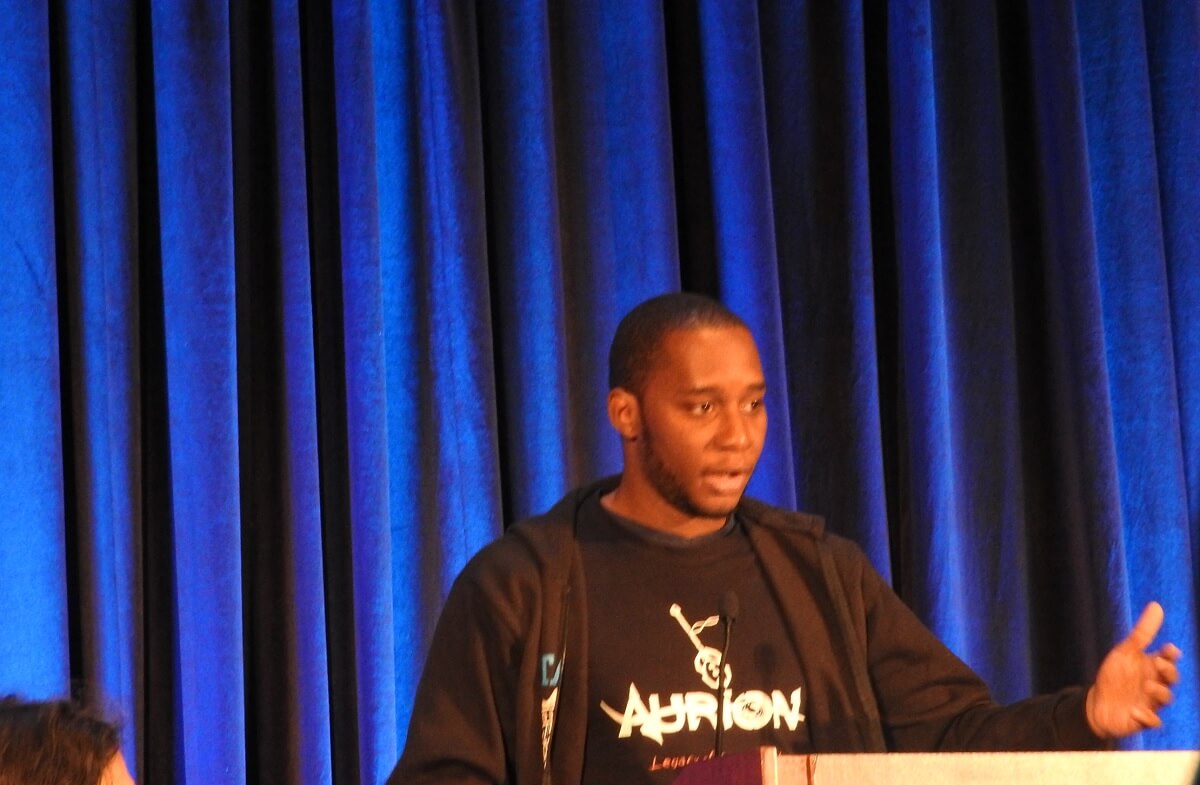 Above: Guillaume Olivier Madiba of Cameroon.

Guillaume Olivier Madiba (@madibaolivier) is a cofounder of Kiro’o Games from Cameroon, in Africa. In 2003, he finished Final Fantasy VII for the umpteenth time. He has been making games for 13 years. His company was featured in the Wall Street Journal as a “wallbreaker,” or someone who breaks through walls.

“If the world don’t give us a chance, we take it by force,” he said. “I want to put Africa on the creativity table. It was like this in Japan 30 years ago.”

He added, “We started as a team, but now we are real family.”

Martina Santoro from Argentina. She is 31 and trained as a political scientist. She works at Okam Games, where she is the first female president of a game studio in Argentina. She is also editor-in-chief of InsideGamesLatam.biz. And she started to direct the animation program at Argentina’s film school, Universidad del Cine.

“I am happy to be here because I am not supposed to be here,” she said. “This job is very difficult for me. I never had to overcome a huge barrier in my life. I had a supportive family. I haven’t struggled to have anything in my life. It finally hit me. This was the first talk I had to make about myself.”

She said she has an amazing team that is guarding her back.

“Who am I?” she said. “I like to think I am a catalyst. You can be the catalyst too. I am from Argentina, the end of the world. I can build this amazing team. What are you waiting for? ” 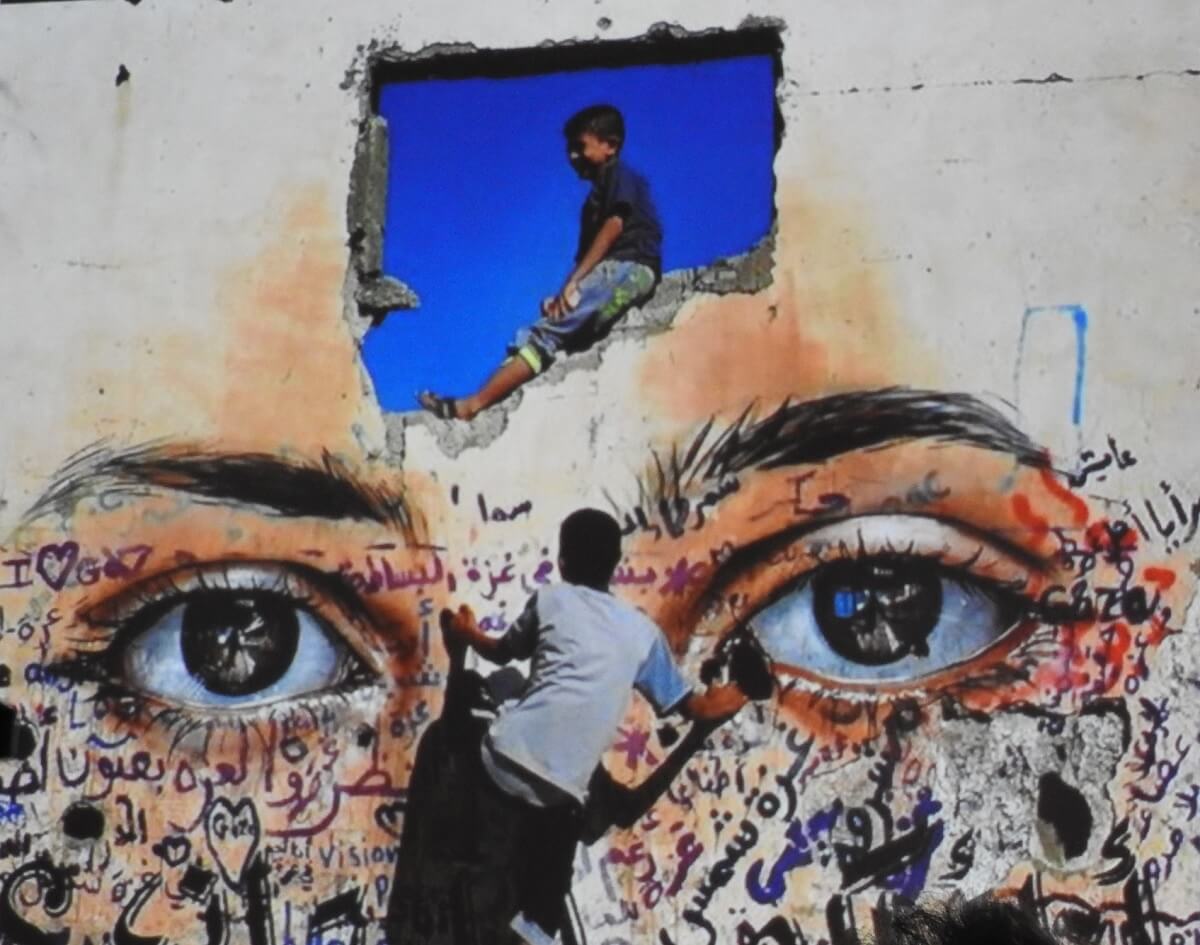 Above: An image from Palestine.

“It has been suffering from occupation for 69 years,” he said. “The Palestinian people love playing games.”

He showed a picture of giant, real slingshot, saying, “This is how we play angry birds.” He said there was a checkpoint where he plays, “Papers, Please,” but he added, “They don’t say please.”

“How do we make games if we are living as survivors?” he said.

Abueideh said the war hit Gaza in 2014. He imagined what would happen if his kids were killed in that war. He said his team got together and made Liyla & the Shadows of War.

They sent it to the app store, and it was rejected because it was based on a “political statement.” He said this community, this industry, was amazing, and I got support from around the world. The game was approved, and it got 700,000 downloads on both platforms. He said he got comments that the game was made by ISIS.

When he told his father what he was doing, his father replied, “My son, you will end up in jail.” He said his wife was terrified as well. She said she advised him not to put his name on the game after he had worked on it for two years.

Abueideh said his No. 1 reason to be in the game industry was to make games that could stop wars and stop more children from being killed.

He got a standing ovation. 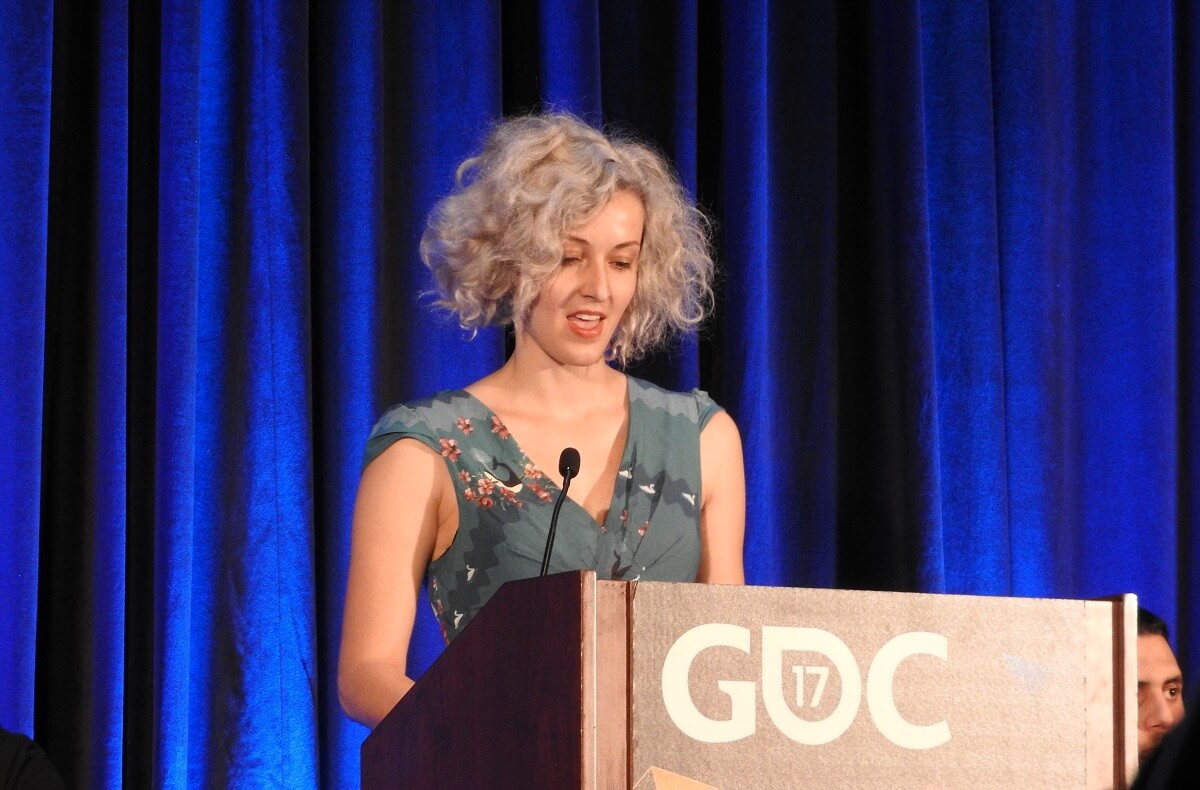 Above: Thais Weiller of Brazil.

Thais Weiller (@thaisweiller) is from Brazil. Life is really crappy sometimes, and working in games is not hard as you go from “crunch to crunch.” She said, “No powerful experience is made out of thin air.” It often involves a lot of suffering. Like a nasty breakup. That awful boss. A journey with a health condition.

“Direct your unhappiness into making a game, into something good,” she said. “It will make you feel good about yourself.”

She released it. The press picked it up and called it a “Depression Simulator.” She acknowledged that she was depressed and went to a therapist.”Please make games,” she said. “Make the games that will help people who feel like you. And you may discover something new about you.”