We’ve heard a lot of noise about how 2017 will be the year to “save” the IPO market. For now, all eyes (or Spectacles) are on Snap to see how it will perform after its IPO. And other hotly anticipated companies like Spotify will be eager to see results as they wait their turn in line.

And that line is getting long. Tech IPOs have been in a lull for more than a year now, with only 15 VC-backed tech offerings in 2016, down from 20 in 2015 and more in previous years.

Part of the hype for 2017 might be wishful thinking. One analysis notes that, at the current pace, it would take 14 years of exits to clear the current crop of unicorns.

And don’t look now, but major startup names from 2016 have been getting beat in the last 3 months, with Acacia (down 31 percent), Apptio (down 30 percent), Coupa Software (down 19.7 percent), Nutanix (down 12.5 percent), and Twilio (down 8 percent) all taking major hits while severely lagging the Nasdaq (up 6.8 percent in the same timeframe). Given the current market sentiment, it would make sense if a few tech companies get the jitters and decide to wait a few more months — or longer.

So how does this all connect to the 45th president, you ask?

Amidst the turbulent first month after inauguration, one major idea — the tax repatriation holiday — has been floated as a boon for tech companies. The idea was to give a one-time pass to nearly $1.7 trillion in cash locked up overseas, and $500 billion held by five tech firms alone.

Indeed, Snap was not meant to be the first big IPO of 2017. That honor should have gone to AppDynamics. Instead, Cisco snapped up the company last month for an astounding premium of 115 percent over its slated IPO price.

Why Cisco? Cisco happens to be one of the most cash-rich companies in the world, holding a “yuge” $60 billion abroad, more than 10 percent of the tech cash hoard. If Trump’s repatriation tax holiday were to come true, that cash could quickly go to buying more startups. CEO Chuck Robbins himself answered that hypothetical by saying the company would use the cash for dividends and acquisitions.

With all that money coming back, Cisco may have feared bidding wars among suddenly cash-rich competitors. Even a few acquisitions could quickly push up prices, making now a good time for a pre-emptive strike.

For AppDynamics, the acquisition may have been too good of an offer to pass up. Concerns had been rising about its prospects. Another recent IPO in the same space — IT operations and analytics — called Apptio (APTI) has a chart that would make any CEO fearful: 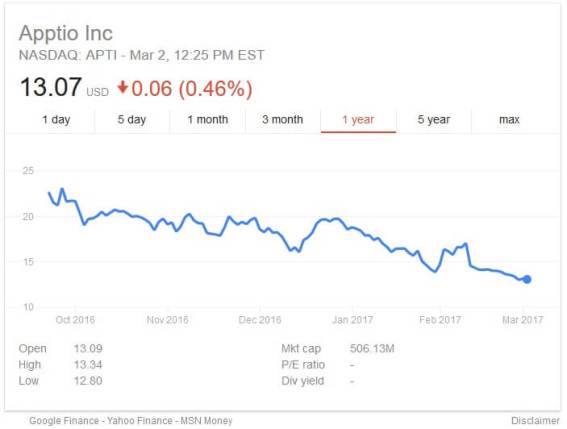 That buy-out money is appetizing to VCs stuck in a constipated IPO market. Buy-outs are the other way for VCs to get their money back, but given the high valuations on unicorns, only the biggest tech companies could shell out a few billion on unproven companies.

Startups have often been proud of refusing buy-out offers, with Snap’s Evan Spiegel famously turning down Mark Zuckerberg’s $3 billion proposition. Startups refuse such offers for a few reasons, such as fear the acquirer will slash jobs in an effort to cut costs. But now many startups are taking these measures themselves. With slower private market funding, startups are looking for legitimacy and hoping to show investors they can spend responsibly.

VCs could also force open the slow IPO market. Funds have to return money to investors eventually, and the clearly aging VC bull market is now in its seventh year while funds are taking longer and longer to liquidate. With 101 unicorns currently waiting and a record $40 billion of additional funds added to VC funds last year, the clock is ticking to get out one way or another.

As viewers of HBO’s Silicon Valley know, most VCs prefer to take board seats and have major influence on such strategic issues. If a big name comes knocking with a wheelbarrow of cash to offer, these investors are only going to become more likely to push for a sale than they were in the past.

Of course, all the excitement over an M&A frenzy in tech hinges on one detail: The current president implementing his tax agenda, including the repatriation holiday. That’s no small task given how things have been going so far.

Although the tax holiday itself seems to enjoy wide-spread support, the news cycle has been quickly filled with the new administration’s seeming other priorities — namely, an anti-immigration binge squarely at odds with the feelings of the tech community.

The tech companies that are the most cash-rich in tech, including Apple, Google, Microsoft are also the ones that have been most up-front about their opposition to the new immigration policy.

Tech companies have been front and center in the fight against the “Muslim ban” and many other immigration changes—positions lauded by many in the Valley for showing courage.

But the new leadership is notoriously thin-skinned and might be loathe to grant free candy to an industry deemed “disloyal.” Meanwhile, Trump has other bargaining chips like proposals on restricting the H1-B visas critical to tech hiring, and California representatives have proposed requirements for tax holiday funds be used on infrastructure. If Trump’stax propositions don’t come through, foreign cash could be an easy way to plug the budget hole.

For the time being, the big companies seem to be hedging their bets about the tax holiday, issuing bonds for quick cash while they wait for the political grind to continue. As Trump appears to double down on his immigration efforts, startups seem likely to be caught between hope and fear for what the administration’s decisions might hold.

Faisal Khan is a Dubai-based consultant with Strategy&. He previously worked in research for Manhattan Venture Partners, a late stage tech investor.