The arcade is dead. You already knew that, but that industry’s coffin is about to get another nail. The cathode-ray-tube technology that powered the monitors for nearly every classic arcade game in the twentieth century is defunct. Sony, Samsung, and others have left it behind for skinnier and more lucrative LCDs and plasmas, and the CRTs that are left are about to sell out. 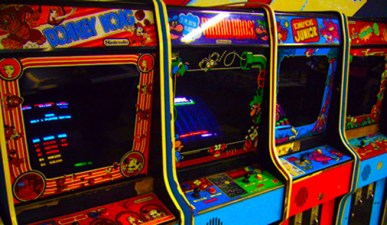 The current stock of new 29-inch CRT monitors is dwindling. Online arcade cabinet and parts supplier Dream Arcades has fewer than 30 of those large displays sitting on its shelves. When it sells out of the current inventory, it will never get another shipment in that size again.

“We’ve secured enough [of the other sizes] to get us all the way through next year,” says Michael Ware, founder of Dream Arcades. “After that, that’s it.”

The future of arcade-cabinet restoration is looking bleak.

“The old arcade games are like aging people,” says Walter Day, founder of high-score-keeping site Twin Galaxies. “They have old livers and aging kidneys. There will come a day when very few arcade cabinets have original components. Time will wear them out.”

To be clear, it’s not that games like Donkey Kong or Pac-Man will suddenly become unplayable. The games can run on newer LCD screens, but they may not look as the developers intended.

“It’s just not gonna feel as nostalgic,” Ware tells GamesBeat when we asked him about the problems with the modern display technology. “The pixels will be sharper on an LCD, but they may not be 100 percent accurate. Colors won’t be quite as vibrant.” Additionally, Ware explained that the refresh rate on an LCD may not play well with an old game’s code that is expecting a much more responsive CRT monitor. It could cause unsightly screen tearing that looks like one half of the screen is occasionally redrawing before the other.

When the last major manufacturer stopped making CRTs, they sold the manufacturing equipment to a Chinese company that couldn’t properly reproduce the winding procedure. “Turns out that’s a semi-manual process,” says Ware. “You have to wind the CRT bulbs by hand, so they stopped making them. I have an engineer on staff that couldn’t do it. I couldn’t do it. It’s almost an art form.”

Winding together a CRT tube with its electron gun (the two major components in a CRT) requires a delicate touch. It’s a two-part, by-hand procedure that begins with the laborer painting the inside of the tube as it spins on a centrifuge. The worker must use a dipstick-like brush to coat the depths of the monitor with a conductive substance. Then he must merge the glass of the bulb and the electron gun under a flame that burns at 400 degrees celsius. Any debris or dust that gets into the unit at that point will shorten the display’s life expectancy.

Because the process is so difficult, it’s unlikely that anyone will pick up the mantel just to serve a small community of classic-arcade enthusiasts. More likely, niche repair companies will begin charging more and more money to fix the older CRT bulbs.

We’re looking at a situation where playing Donkey Kong in the way that its creator intended is reserved only for the most dedicated collector. It will be prohibitively expensive to recreate that experience.

“I have a feeling that — y’know how there are those guys doing pinball repair on the side — there will probably be some guy you can send your monitor to and have him rewind the bulb,” says Ware. “I think it’s going to be really expensive.” A CRT tube is very heavy, so shipping costs alone would be costly. “Right now, I don’t know of anyone who does [the winding].”

To fill the void, Day suggests that new companies will emerge to reproduce those old machines using only modern-day technology. An LCD screen connected to a PC running a piece of software that approximates the original experience will be adequate for most people.

“At that time, [exactly restoring the original units] may become a high-end designer kind of gift that is only pursued by the wealthy,” says Day. “In the very far future, the value of an authentic 1980s arcade game may become so high, that the monetary value will be significant, and all the private sellers might sell their holdings to [museums], which are better equipped to preserve them properly.”