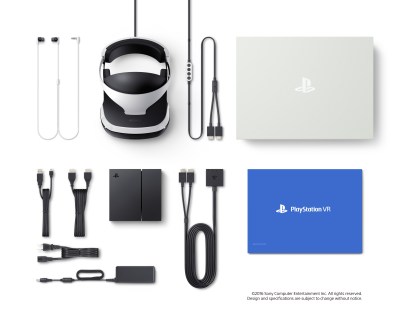 PlayStation VR looks cool, and it has some neat games.

Despite big releases in the likes of Resident Evil 7 and Dirt Rally VR, it’s been an undeniably quiet start to the year for PlayStation VR (PSVR), but Sony is promising that won’t last long.

The headset maker said this week that more than 220 software titles and experiences are development for the device, and more than 100 of those will be released this year. It’s not clear if that includes the apps already launched in January and February, though we’d assume it does.

That doesn’t necessarily means 220 games; PSVR has plenty of other types of content like 360 degree video hubs and VR music videos releasing by the week, but this news will still be welcomed by those that worried the console’s content drought was indicative of future support for the headset.

That said, Sony named checked some games in its press release, including Ace Combat 7, Final Fantasy XV, Gran Turismo Sport, Farpoint, Tekken 7, and Steel Combat. The first three of these six games only sport optional extra VR modes. They’re not full VR games and it remains to be seen if Tekken 7 will support the full game in VR.

Sony also confirmed that 100 titles have released on PSVR as of February 19th. This followed last weekend’s news that the company has sold 915,000 units of the device since its launch in October 2016 and is well on its way to meeting its internal target of one million sold by April.

PSVR’s next big release is multiplayer six degree of freedom shooter, Starblood Arena, which arrives in April. Following that in May Sony launches its ambitious attempt at a full FPS for VR in Farpoint, a game that uses the company’s new gun-shaped Aim controller. While the company hasn’t made any new game announcements at the 2017 Game Developers Conference this week, we’re hoping to see much more from PSVR at E3 2017 this June.