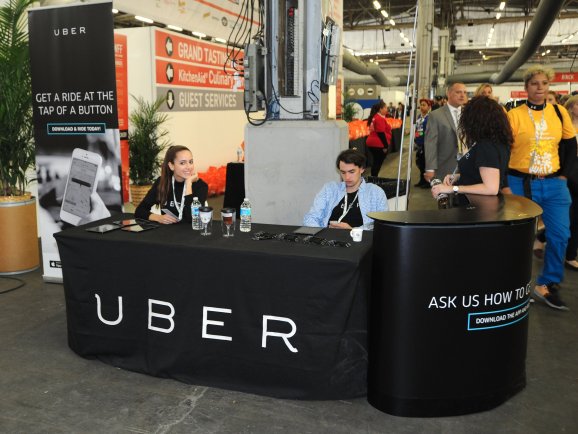 Uber relies on a network of brand ambassadors to spread the word, but it's also experimented with hiring contractors to help it spread and grow faster.

Criticism of Uber continues to pile up.

This week, we heard the car service was using secret software to evade government regulators and a video showed its chief executive in a verbal altercation with one of the company’s drivers. Previously, the company’s self-driving cars raised safety concerns in San Francisco when, because of faulty and incomplete technology, they reportedly barreled through red lights and crossed over bike lanes. Uber has recently been accused of sexual harassment, intellectual property theft, and other questionable behavior.

And Uber isn’t alone. Silicon Valley is gaining a reputation for being obsessed with making money at any cost, i.e. Theranos, which made false claims and risked lives. The tech industry is becoming too much like the finance industry, which a decade ago caused the Great Recession with its greed.

The irony is that both industries compete for top engineering talent from our colleges. And each corrupts these students in a different way. Finance uses their knowledge to engineer our financial system, while tech focuses it on making money rather than on uplifting humanity.

My greatest fear after joining Duke’s engineering school in 2004 was that my students would end up joining investment banks or management consultancies or, when they joined the tech industry, would act as Uber and Theranos executives have. We teach our students core technologies but do not give them the vision to better the world.

That is why we need people with good values and ethics leading the way. We need innovators who care about enriching humanity rather than just themselves. We need people who give back to the world and make it a better place. There are positive examples, of course, with successful executives like Bill Gates and Mark Zuckerberg devoting large portions of their wealth to public health and other notable causes. These are the values we need to instill in our engineering students — before they absorb the corruption of our investment banks and big business.

This year, Carnegie Mellon’s engineering dean, James Garrett, presented me with the opportunity to teach students how they might use technology to solve humanity’s grand challenges and build billion-dollar businesses by helping 1 billion people. I jumped at the chance.

I wanted to try an experiment: teaching students the potential of technology to solve big problems like clean water, energy, education, disease, and hunger. The idea is not to build silly apps, as Silicon Valley does, but to design real solutions to global problems.

A decade ago, it would have seemed wishful thinking to say that students could effect change on such a scale. It was only governments and big research labs that could solve grand challenges — and they required big grants and budgets. But that is no longer the case. The cost of building world-changing innovations has fallen so low that motivated graduates can do it.

These young dreamers can build technologies that solve these problems. Unconstrained by the idea of what is impossible, they can help take us into a world in which we worry more about sharing prosperity than about fighting over what little we have.

Witness the threshold we have already crossed with Moore’s law. Our smartphones are many times faster than the supercomputers of yesteryear and, by 2023, will exceed the human brain in both processing and storing information. We are seeing exponential advances in technologies such as sensors, artificial intelligence, robotics, and genomics. And their convergence is making amazing things possible.

Cheap sensors and networks, for example, are enabling the development of a web of connected devices, called the Internet of Things. Besides increasing the energy efficiency of our homes and tracking our bodily functions, this web of sensors enables the automation of manufacturing, the creation of smart grids and cities, and a revolution in agriculture. The combination of sensors, artificial intelligence and computers enables robots to do the work of humans: to assemble electronics, drive cars and look after the elderly. And digital tutors can take students into virtual-reality worlds and teach them engineering, mathematics, language, and world history.

The same technologies are enabling entrepreneurs to transform health care. We can use artificial intelligence to help us learn how the environment, including the food we eat and the medicines we take, affects the complex interplay between our genes and our organisms. The human genome has been mapped digitally, and artificial intelligence may even enable us to engineer cures for certain diseases.

But these technologies all have a dark side and can be used in destructive ways. As easily as we can edit genes, we can create killer viruses, alter the human germ line, and inadvertently destroy ecosystems dependent upon an insect we casually exterminate. As easily as nursing the elderly, robots can become killing machines. Our future can be either a “Star Trek” utopia or a “Mad Max” wreck; it all depends on the choices we make and how we educate our students.

I have no idea whether my attempts at Carnegie Mellon will succeed in equipping these young engineers with the values to pursue something more worthwhile than personal gain at global expense, but it is certainly worth a try. Our students are our future, and that motivates me to enable them to fulfill grand visions. We need to launch similar experiments in schools across the United States and the world.

Vivek Wadhwa is Distinguished Fellow at Carnegie Mellon University Engineering at Silicon Valley. His forthcoming book, The Driver in the Driverless Car: How Our Technology Choices Will Create the Future discusses the choices we must make to build a great future