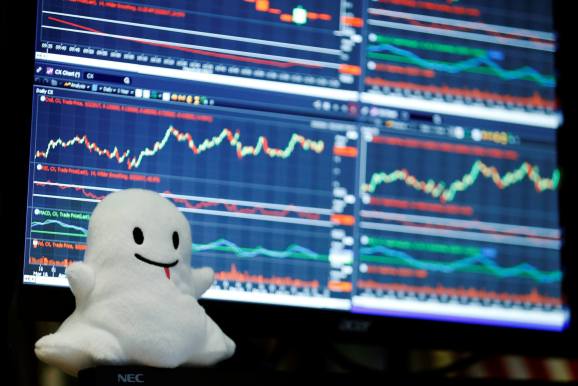 A stuffed ghost rests on a trader's screen above the floor of the New York Stock Exchange (NYSE) after Snap Inc. listed their IPO in New York, U.S., March 2, 2017.

Both index providers have said they are reviewing Snap’s inclusion. Were Snap to be added to indexes such as the S&P 500 Index or the MSCI USA Index, managers of stock index portfolios would have to buy its shares, and other investors whose performance is tracked against such indexes would likely follow suit.

Some money managers worry about buying Snap’s Class A shares because they have no voting rights, meaning those shareholders will have no voice on matters like company strategy or executive pay.

“They’re tapping public markets but giving public shareholders no say,” said Amy Borrus, deputy director of the Council of Institutional Investors, which represents pension funds and other large asset owners, in an interview.

In reaching out to both index providers, she said, “What we would like to see at the least is for the indexes to exclude new no-vote companies.”

Meetings with both index providers are scheduled this week, she said.

David Blitzer, managing director of S&P Dow Jones Indices and chair of a committee overseeing its indexes, said they would not add a new stock like Snap for six to 12 months after its IPO in any case, and will use that time to study Snap’s structure.

While the index provider does not have a hard requirement about a company’s voting structure, the committee needs to think through how much influence investors should have, Blitzer said in an interview on Monday.

MSCI is seeking feedback from investors about whether companies without voting rights should be included in indexes, according to the March 3 statement. A spokesman did not immediately provide further details.

After the council raised concerns about Snap’s lack of voting rights last month, Snap’s chairman Michael Lynton wrote back on Feb. 21 to point out a section of its prospectus stating the voting structure “prolongs our ability to remain a founder-led company” and that Snap will have a majority-independent board, including himself.

Index inclusion requirements vary. For the S&P 500 a stock typically needs a market capitalization of around $5.5 billion and to have been profitable over the past four quarters, for instance, Blitzer said.

Snap’s lack of voting rights was outlined in a registration statement Feb 2. The company filed amended versions of the document during the month, ultimately including more notice that investors might receive limited information. The company also specified Class A investors would be invited to attend its annual meeting.

Spokespeople for the U.S. Securities and Exchange Commission and Snap declined to comment on the reasons for the new language.

But the changes resembled those typically added in response to questions by the SEC, said David Berger, an attorney for the Palo Alto, California law firm Wilson Sonsini, who advises companies on corporate governance, via email.

The agency often asks for more disclosure on issues it thinks would be important to investors.

“Often at the top of that list is information about the rights of shareholders,” Berger said.