To experiment with this theory of trying to create games that are fun and differentiated and see how they do on mobile, we put out, for example, a game called Evil Factory. Small game. We were only in development for a few months. But it got four and a half stars. You should check it out, because I know you love ‘80s-style arcade games. I think it’s a great game, and if you read what’s being written on the app stores, people are saying, “Finally a game I can really play,” that kind of thing. In a lot of ways it was an experiment for us, to check out own premises and see if they were right.

DomiNations is doing well. Next week we’re going to announce some milestones for the three big games, including DomiNations. It turned out to be a great deal. We’re only two years in, but it’s showing the same longevity we’ve seen with many of our other games. There was a lot of skepticism. Could you really do this in the west? I think you asked me that exact question a couple of years ago. Does this apply to the west? Does this apply to mobile? I think we’re starting to see that it does. It’s not through putting a ton of marketing dollars in the top of the funnel to puff up the revenue numbers, because we’re obviously not doing that. But in terms of retention the numbers are very good. It’s very stable. It retains players well. We think there’s a lot more coming along.

GB: What’s going on with the pace of investments in new companies? I see Nexon made a new investment this week.

Mahoney: We have another one we’re about to announce. We just invested in another company in Korea as well. I’m not sure if the pace is getting higher. We have a lot of cash, about $3 billion now. We generate about $500 million a year. We’ve been accumulating cash. We think that if you have a stable set of games that generate cash flow, as ours does, that gives you a lot of flexibility to invest in new good game ideas. We’ve been plowing a lot more money than we used to into development of new games, so we can generate a pipeline. It takes about three years to make a game, minimum. Those games are starting to come out around the world — Japan, Korea, U.S. We have a huge slate in each of those regions this year.

The other place you can put it is M&A or external publishing deals. I would prefer if there were more companies that think the way we do, which is one of the reasons I’ve been getting more vocal about this. If more of us said what, as consumers, we all feel, we’d have more developers with the intellectual and financial courage, and maybe a better class of third-party investors to give good game developers the time they need to develop good games. That’s what we all want. 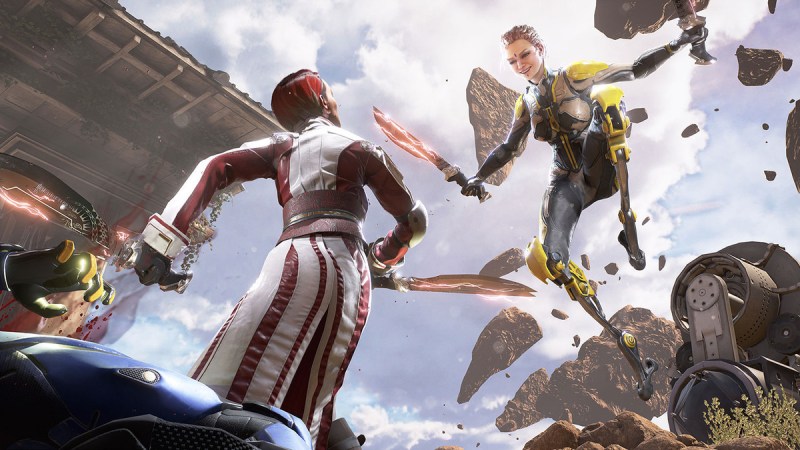 Above: Lawbreakers has fierce first-person combat.

GB: On that front, Cliff Bleszinski yesterday — if Cliff was worried about something like Overwatch as a creator in the market, a very successful game, what would the advice for him be? As a creator, does he need to worry about a game like that? Or does he need to just focus, I guess, on what he’s doing?

Mahoney: I talk to Cliff about this a lot, obviously, because we’re very invested in him. My view is it’s good to know what other artists are making, but to not spend too much time thinking about that, and to be very clear about your own vision. I don’t think Cliff has shown you yet what he’s working on, but I believe the direction we’re all heading in is something that’s a lot different from Overwatch.

I spoke with Patrick Soderlund at EA about Battlefield One. Patrick, if you recall — years ago I bought DICE on behalf of EA because I loved Battlefield 1942 so much. We made an investment and then we purchased the company. As far as I can tell, the Battlefield franchise is about a third of EA’s revenue now. Then they come out — everybody else is doing modern or sci-fi or semi-fantasy and here comes Battlefield One. It’s World War I. You talk to Patrick about it and you realize, of course they should do that. It’s a game that positions itself. What a brilliant move by them, right?

A guy like him is going to get a lot of pushback from reasonable people saying, “Why would you do World War I? Nobody cares about that. There’s no demand. What evidence is there of any demand for World War I?” But then you think about it for a second. Of course there’s no evidence of demand for it, because nobody’s made a game like that. And yet World War I has this amazing progression of technology, an amazing history, a very personal history. You play the training example, those are all real people who died in the war. Their names are real names. It’s a massively differentiated game with all sorts of cool stuff you can put in, because of all this rich history, this compelling history. Now you have a highly differentiated game.

If Patrick and his team had worried too much about what else was going on in the rest of the world, the world would not have had Battlefield One. So, using that as an analogy — Cliff has a unique view as to what a great arena shooter is, and what has and has not been done with a competitive arena shooter. He’s a savant at that. He has great insights. Our job is to support his great insights. He’s a very vocal guy, too, but he loves to mix it up in terms of sharing ideas and debating ideas. That’s the type of people our industry needs more of.

The reason the world has Overwatch is because Blizzard took the same approach. They weren’t obsessed with modern-day, high-tech, near-future shooters like Black Ops or Battlefield 4. They had their own opinion about what could be different, what’s interesting, what the world hasn’t done.