GB: I wonder if some of these trends are slowing down or running out of steam in some ways, or if they really are continuing strong. This east-into-the-west trend, has there been some slowdown in the appetite for M&A deals in that direction, or otherwise pushing into the west?

Mahoney: Certainly not from us. We’re more committed than we’ve ever been to the western markets. We have a better sense of our value added to western developers than we ever have. We’re much more sophisticated than we were even three years ago in terms of how to bring that value added. Again, it’s about how to make a game last a long time, what you have to do in terms of live game operations and development. How you set up your customer support, but more important, how you do in-game events and live game development, so you continue to have a pipeline of new content going into the game. All those things that make that up, we’re much better set up for them than a few years ago.

What I really hope is happening, though, is that the people who are investing in game companies are doing it — I look at what’s going on in Hollywood. It seems like there are more and more sophisticated investors backing certain types of films, and especially certain types of television. They’re very clear about what kinds of productions they will and will not finance. I was reading about the guys who backed La-La Land. They’re very clear that they’re not going to bid up what most people consider tier one IP. They’re going to look for differentiated IP, differentiated ideas backed by people they can trust.

I think the parallels to the TV industry are very interesting. When I grew up in the ‘70s and ‘80s, TV was a wasteland. It was where actors and directors went to die, literally, at the end of their careers. CHiPS. Three’s Company. Starsky and Hutch. Some people liked those, I don’t mean to take anything away from them, but I think we can all agree that they weren’t Star Wars and Kramer Vs. Kramer, tier one IP. All the good stuff was happening in cinema.

Then, in the ‘90s, you had Sex and the City. You had Sopranos. You had 24. Now, God, I saw Narcos a few months ago. It’s amazing. I saw Westworld, which you probably saw. And it’s not just that we all loved that movie from Michael Crichton in the ‘70s. The production values, the set designs, the photography. The acting and the writing are out of sight. You have Amazon, Netflix, and HBO saying, “No, we don’t need to do this the old way. Why do we have to do what everyone’s been doing for 50 years? It’s not working. You’re slumming for the least common denominator and your margins are getting thinner every year. Does that seem like a good business model? No. We can do it a different way.”

There’s a direct line, as guys like Bezos and Netflix have found, between good art and good money. It happened in animation, too. There’s before Pixar and after Pixar. Before Pixar, everybody looked to the golden age of Chuck Jones, and there was this weird guy named Miyazaki in Japan, but that would never sell in the U.S. Then came Pixar, two guys backed by another guy, saying, “We just don’t need to do it the old way.” 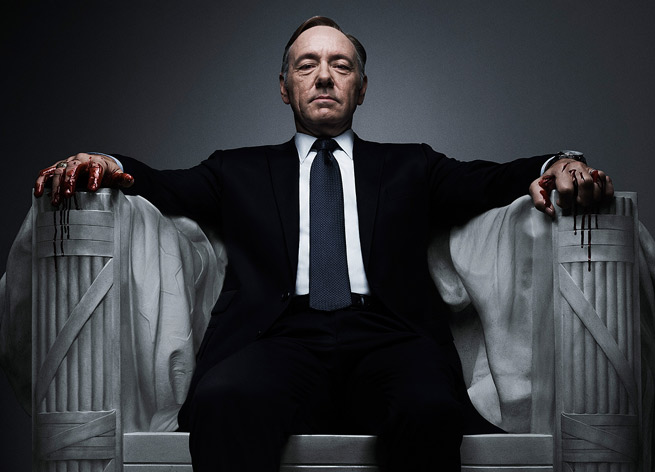 Above: Kevin Spacey in Netflix’s House of Cards

So I’m hopeful. I think our industry needs to have our Amazon/Netflix moment. I don’t mean those companies specifically, but I mean a decision by those of us who finance these things and support artists to be able to go out and create great art. We want to be that company. There’s a couple of other companies like us. And yet 90 percent of the companies we talk to around the world don’t see that vision. They’re trying to do something else, and they’re backed by a class of venture capitalists who largely aren’t thinking about games as an art form.

Taking a differentiated approach to new games doesn’t guarantee success. That’s for sure. But it is the table stakes, for a real hit. I can’t speak any longer for offline games, because that’s not our business, but as far as online games go, keeping a game going and growing like we’ve done with DomINations now, it’s a grind. It’s hard to do. It’s hard to get good people to do it. Much harder than it is to get new game developers, if you can believe that. Part of it is because there’s a set of things you have to learn, and people don’t consider live ops and live dev a creative side of the business. There’s an art to being able to make a game last a long time.

GB: I’ve been doing this ongoing speech about where game jobs are in the world. You wind up seeing things like the map of China, where I think it has 6,100 game companies.

Mahoney: And a lot of turnover there. You’ll have 6,300 completely different game companies next year.

GB: The conclusion I came up with was, if you did a map of the world that mattered, it would be the franchises, where they’re made. I was trying to categorize games by city, where they came from. Each region thrives based on the franchises they have. If you don’t have any of these, you’re not on the list. Beijing isn’t on this list. Shanghai and Beijing probably have more game jobs than any of these regions, but they’re not on the map that matters.

Mahoney: Yeah, I think that’s right. I wouldn’t be surprised if they started getting on the map, though. 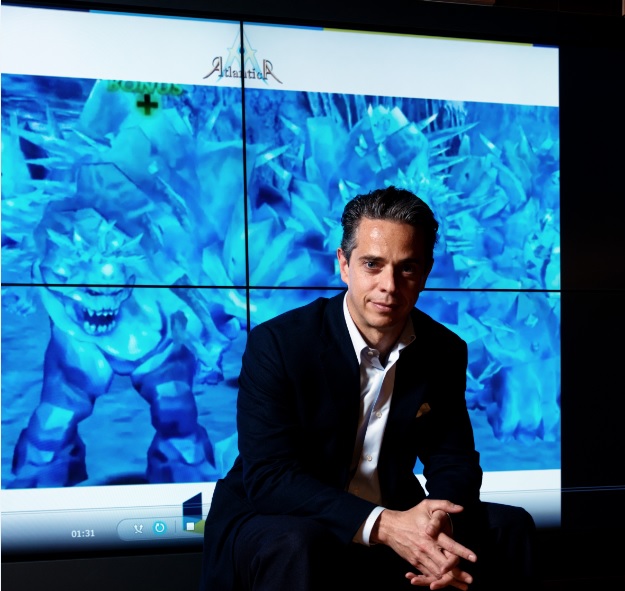 GB: If we just had that part of the conversation, what do you think is interesting about where game jobs are and where great games are being made?

Mahoney: Let me answer that in a sort of oblique way. I was in Korea about a year and a half ago. I was interviewed by a Korean reporter. He said, “I’ve noticed that you’re starting to publish games from China in Korea.” I said yes. He said, “What would you say to the criticism that it hurts the Korean game ecosystem to do that?”

That’s a tricky question to get asked. Remember, I’m an American citizen. We were founded in Korea. But he was asking it very sincerely, and I think it was a good question. My answer to that was–I’m from Silicon Valley. I grew up there in the ‘80s. I remember, from my childhood, when disc drive manufacturers and DRAMs from Japan eviscerated the U.S. market for those products. If you look at Intel’s history, they just abandoned the field on memory chips and went direct to CPUs because they thought they could differentiate there. Other companies went out of business or battled it out. There was a variety of responses, but I certainly remember that time.

Then I was at EA. 10 years ago, EA was one of many companies. Ubisoft and Take-Two and some others were using China essentially for outsourced art. The art director would be back in Vancouver or Paris but the grunt work was done in Shanghai, someplace like that.

Today some of the smartest engineers are in China, I believe. Some of the smartest and most talented artists are in China. Some of the smartest and most talented business people I know are in China. This is not just a few people. There’s a lot of them. So whatever the status quo is today, I think our world is changing. My friends in China who are in the games industry are dead serious about being really good. They get the joke about being good. They realize they may not have all the capabilities they want now, but they’re serious about being world class. Any developer, any publisher, in any region of the world that doesn’t take that very seriously and is not noticing the trend line is missing out on something important going on in our industry.