The prototype is part of a reference design for a second generation of VR headsets that don’t have to be connected to a PC. Hardware companies can adopt this technology, and Qualcomm has started an accelerator to enable those companies to move faster. At least five headset makers plan to launch VR headsets in 2017 that are based on Qualcomm’s newest chip, the Snapdragon 835. Osterhout Design Group has also said it will create two augmented reality smartglasses models with the 835.

I tried the headset out at GDC 2017 and was taken aback at first that I could pretty much walk anywhere in the hallway where I was testing it. The device was untethered, with all of the processing taking place in the headset itself. This one had last year’s chip, the Snapdragon 820 processor, but the production versions will use the newer 835.

Qualcomm vice president Tim Leland said the device was a reference model, which others could use as their own products or as a foundation for more unique designs. The 835 will have better performance per watt, significantly better graphics, and a 20 percent improvement in motion-to-photon latency, he said. There will also be better interaction with sensors and better single-buffer rendering performance. 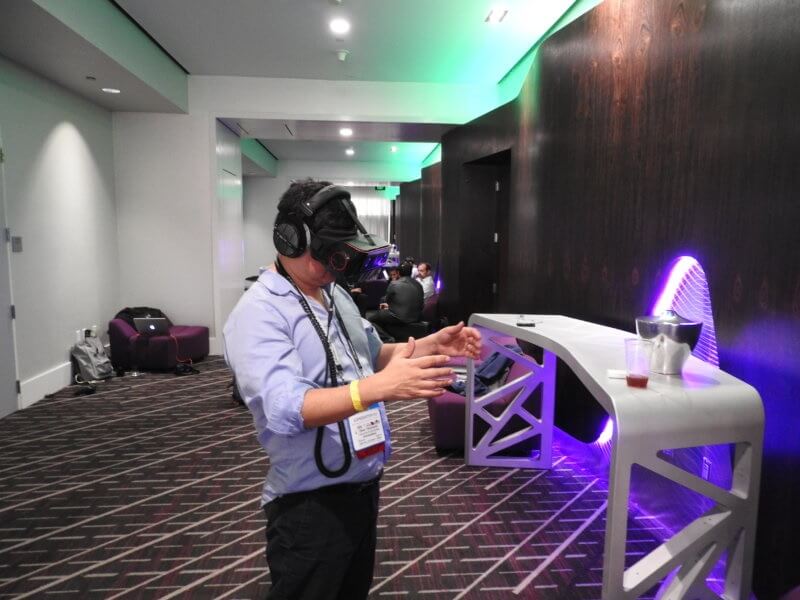 Above: Dean Takahashi tries out the Qualcomm VR headset at GDC 2017

The headset I tried was smaller and less bulky than existing headsets like the HTC Vive and the Oculus Rift.

It was battery-powered, offering about five hours of life with a 3,600 milliamp-hour battery. But the battery life will be content-dependent, Leland said. The device will have a hardware version available in the second quarter, with six degrees of motion tracking. And there will be a software kit available, as well.

The headset also had a fairly large bar in front of the eyes, with a couple of sensors as part of its inside-out sensing design. (“Inside-out” means the sensors are on the headset, not on devices set up around the room).

Those sensors were able to detect my hands and the movements of my 10 fingers. The device used controller-freehand tracking from Leap Motion, which meant I didn’t have to hold a touch controller in my hands. The headset ran Leap Motion’s demo software.

During my test run, I was able to pick up and create blocks. I could toss them around and look at my fingers in virtual reality. The resolution was good, though the tracking wasn’t absolutely precise. It was still a little hard to pick up objects, but mainly because I had no force feedback, or sense of touch, that informed me when I had touched a block.

The Leap Motion software has been integrated into Qualcomm’s reference design kit that other companies can take and put their brand names on, if they wish. Leland said hand-tracking is optional for other companies to include, but the sensor for it isn’t that expensive. It adds very little weight, so including it is kind of a no brainer for hardware companies.

The Qualcomm headset was smaller than Intel’s own prototype, dubbed Project Alloy. That device has the capability of a high-end laptop, with the ability to run VR apps at 90 frames per second. The Snapdragon 835 is powerful, but I don’t know what kind of performance it will have. Qualcomm’s device was also much lighter, which means it didn’t feel so heavy on the head. 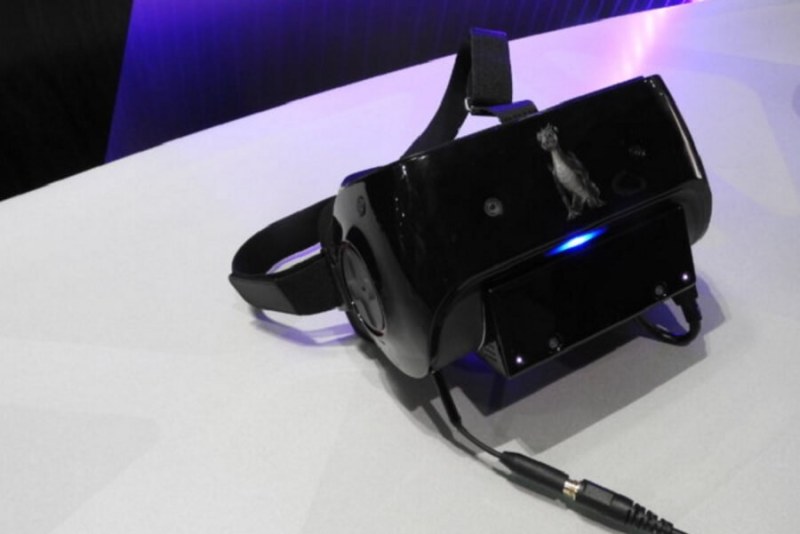 The developer headset had a four-megapixel (2560×1440) WQHD AMOLED display (two megapixels per eye) and six degrees of freedom (6DoF) motion tracking. It had two monochromatic, one-megapixel (1280×800) global shutter cameras. It had four gigabytes of LPDDR$ DRAM memory and 64 gigabytes of Flash UFS. It used wireless with Wi-Fi, Bluetooth, and USB3.1 type C (power).

For audio, it featured Qualcomm Aqstic audio codec (WCD9335), and for I/O it also had a trackpad on the right side of the headset.

The best thing about this prototype is that it told me the second generation of VR hardware isn’t far off. That’s a good thing, because the first generation hasn’t gotten enough traction to sustain a large number of VR startups and game companies.

In other developments in VR at GDC, LG showed off its first wired headset to compete with the HTC Vive. It is based on the Steam VR technology developed by Valve and can use apps that are available in the Steam VR store.