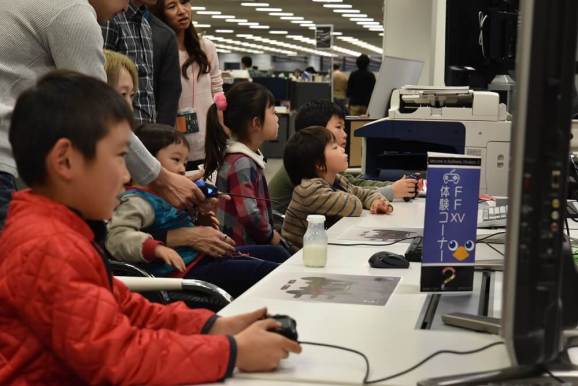 The developers' children take a look at what their parents have been working on.

Final Fantasy XV explores the importance of friendship and familial bonds in times of adversity. It’s something that the developers know all too well.

At the 2017 Game Developers Conference in San Francisco, FFXV director Hajime Tabata gave a presentation about the challenges his team faced while making the highly anticipated role-playing game. Before its release on PlayStation 4 and Xbox One in November 2016, FFXV was notoriously known for its decade-long gestation at Square Enix. The company originally announced it as a spin-off game, Final Fantasy Versus XIII, in 2006. But it wasn’t until 2013 that Square Enix re-revealed it as the next major entry in the long-running series.

Two years ago, the Japan-based FFXV studio — known internally as Business Division 2 — released Episode Duscae, the first public demo of the game, within copies of Final Fantasy Type-0 HD. During his talk, Tabata said via translator that the demo served as a “proof of concept” of what the final product would look like. It also gave them an idea of how much work they had left to do — and it left them feeling incredibly overwhelmed.

“The volume [of work] we needed to get done was big,” said Tabata. “Racked by chronic pressure, fatigue, and insecurity, our team lost its muster, and [our] performance dropped off sharply.”

That summer, Tabata needed to find a way to restore his colleagues’ confidence. A selfless act from his daughter gave him an idea. 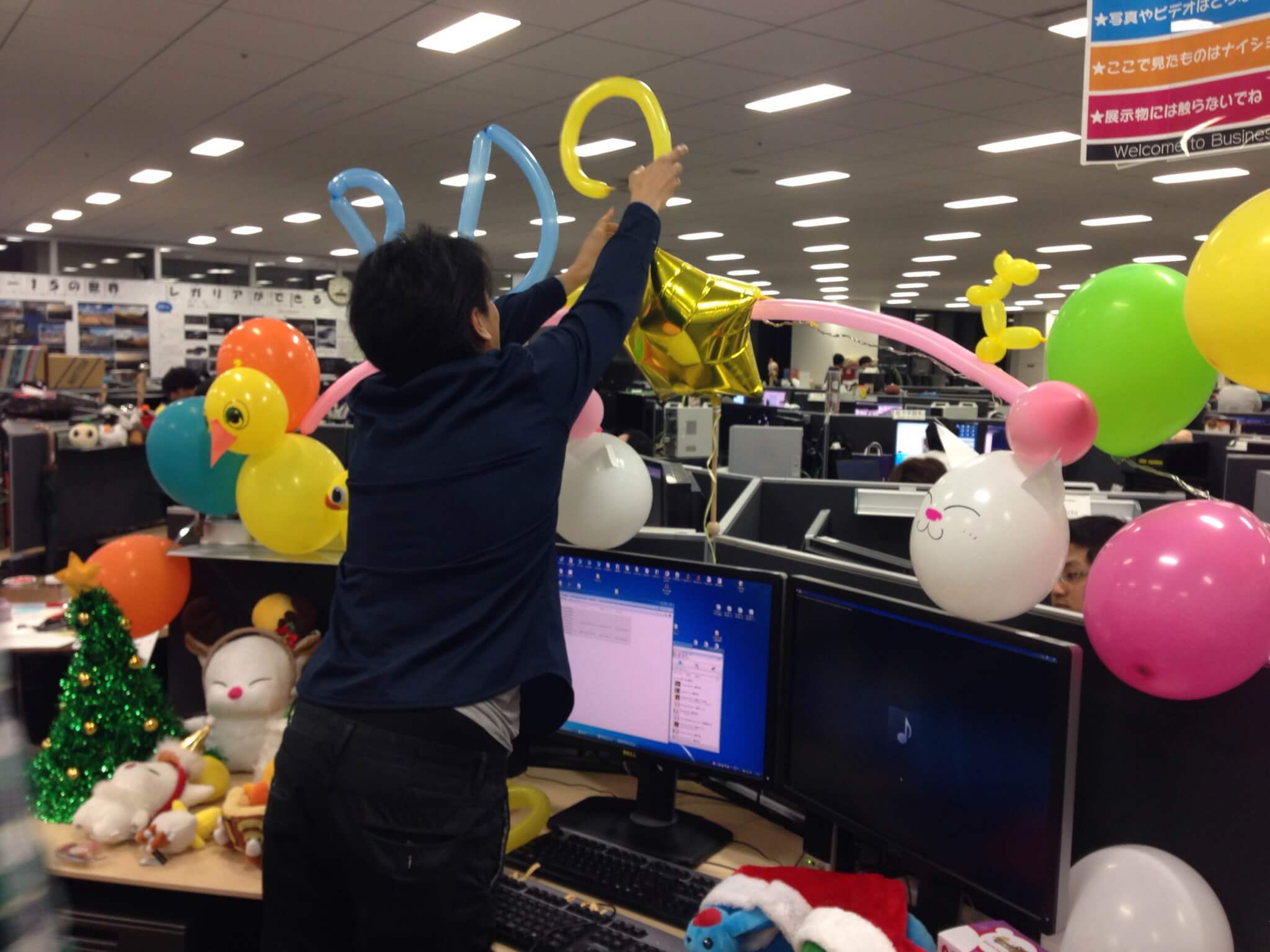 Above: Moogle balloons are the best.

“One day as I was [getting ready] for work, my daughter — she was 6 back then — came up to me and, without saying a word, gave me a big hug,” he recalled. “Without letting go, she asked me, ‘How much longer will you be busy [making the game]?’ Not knowing what to say, I told her, ‘Well, it’s still going to be a while.’ On hearing that, she held her tears back and with a big smile said, ‘Chin up, and keep up the good work, Daddy!’ … She put her worry for me ahead of her own [feelings].

“Seeing her hold back her tears was very hard for me as a parent. At the same time, I realized how much my family actually put up with [my work]. In order to solve this problem, I had a meeting straight away with my team.”

The developers decided to organize a bring-your-family-to-work day. The goal, Tabata said, was to make sure the staff had “a better work-life balance, to show appreciation to our families, and to give them peace of mind.” They temporarily put development of FFXV on hold.

“We spent quite a lot of time to prep for our family day, even though we were really in a hurry and really worried about development milestones and schedules,” said Tabata. “Back then, Business Division 2 had around 250 staff members, so bringing their families to the office was such a big project for us. We actually customized Final Fantasy XV for the kids and set up some PCs for them.

“And our staff and their kids spent all day playing Final Fantasy together. My daughter was there, too. … [The employees] showed husbands, wives, and parents their work desks and showed them what it is they do.”

Square Enix’s family day was a success. It reinvigorated the team and prepared them for the tough work ahead. 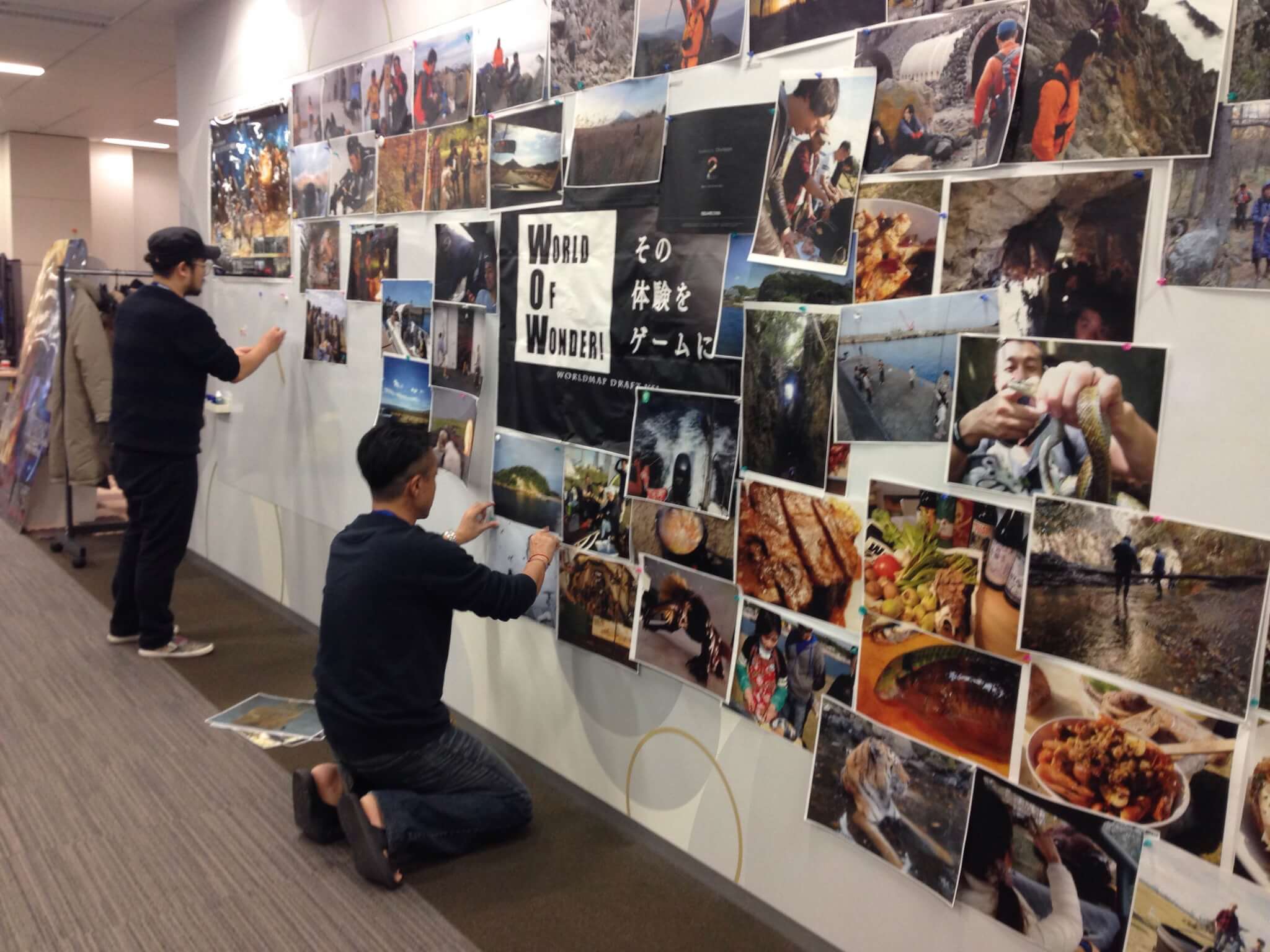 Above: A collage of the team’s research photos.

“Showing them what we actually do every day gave us a new appreciation for [our work]. It was really important for each staff member to show what they actually do at work to their families,” Tabata continued. “By having this family day, we got our muster back and set our sights on our goals again. The key to having a strong team — it’s very, very important to have family members support you.”

Currently, Tabata and the rest of Business Division 2 are working on updates and new downloadable content for Final Fantasy XV.