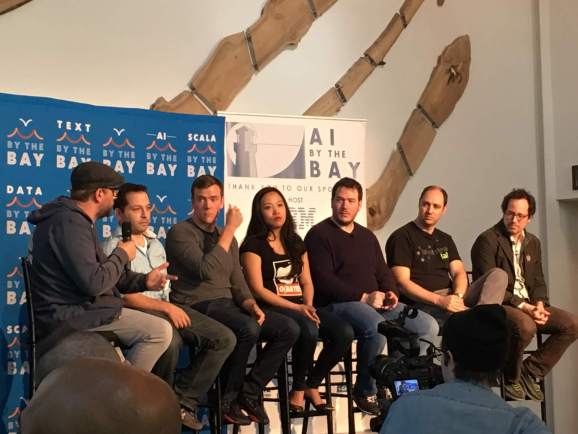 Alexy Khrabrov of Cicero.ai (left) moderates a panel with Jake Flomenberg of Accel, Adam Kell of Comet Labs, Jean Xin of DCVC, David Beyer of Amplify Partners, Benjamin Levy of Bootstrap Labs, and Bradford Cross of DCVC, at AI by the Bay in San Francisco on March 8, 2017.

“It’s hard for me to meet a startup that doesn’t throw in the word ‘AI’ to describe themselves,” said Jake Flomenberg.

The partner at venture capital firm Accel made this statement today at the AI by the Bay conference, where he joined five investors for a discussion on what VCs are looking for in AI startups. The panelists acknowledged the hoopla surrounding AI and soundly rejected the idea that VCs are backing AI startups because of a personal passion for the tech, or simply because it’s a “hot” space. Their conversation also reminded everyone that most startups will fail.

“We’re seeing a lot of LinkedIn profiles that are being updated in the past 12 months” to include AI experience, said Bradford Cross, founding partner at Data Collective (DCVC), of vetting founding teams for possible investment. “Kind of miraculous, right?”

Bootstrap Labs cofounder Benjamin Levy says he has been pitched by more than 1,000 startups from 60 countries. He explained it’s as if “AI is the new electricity.” He even joked that there might be an AI-powered magic 8 ball someday.

David Beyer of Amplify Partners declared, “I don’t care about AI per se. I don’t think AI being involved fundamentally changes the mechanics of going to market, a product’s value proposition, and so on.”

Jean Xin, an investor at DCVC, shared that sentiment, “We focus on the business first before we even look under the hood at the AI.” Xin explained DCVC asks the same basic questions that any VC asks: Is the technology defensible, can it be made into production, can it get customer traction?

“The confluence of factors that determine success are far beyond the technology itself,” stated Adam Kell, an investment partner at Comet Labs. “AI may not be the right solution for a lot of problems.”

“Most AI startups are not going to fail on the basis of their actual AI,” said Flomenberg. “They fail because they fail to identify a problem that needs solving.”

The panel served as an obvious reminder that even as entrepreneurs talk about changing the world, and VCs utter platitudes about long-term value, at the end of the day, nine out of 10 startups will fail. There’s little AI can do about that.