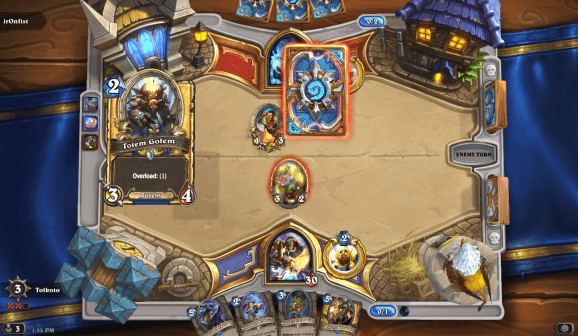 Here’s an easy and free way to get some Hearthstone cards.

Blizzard is giving players a free pack for simply voting for a player to join their country’s team in the Global Games competition. Hearthstone is the leader in a digital card game market that earned $394.6 million in revenue in 2016. It’s also a popular game in an esports market expected to be worth $696 million in revenues in 2017, according to market research firm SuperData. You can vote here. Voting ends 12 a.m. Pacific on March 14.

The Hearthstone Global Games will features teams representing 48 different countries fighting for a $300,000 prize pool. The top ranked player from each country is automatically in the Global Games team, but the community votes for the other three players in each group. The tournament does not yet have a schedule.

Don’t worry if your country isn’t one of the 48 in the Global Games. If that’s the case, you can vote for a player from any country and still earn you cards.

Not only does this free reward foster some good will in the community, but it encourages players to become invested with the competition. More Hearthstone fans will become aware of the people in their country’s team because of this voting process.

The free pack is from the Whispers of the Old Gods expansion. One pack of cards usually costs 100 in-game gold, or you  can buy 2 for $3 with real money. The Old Gods set will still be eligible when the new Standard cycle, the Year of the Mammoth, starts next month along with the release of the Journey to Un’Goro expansion.