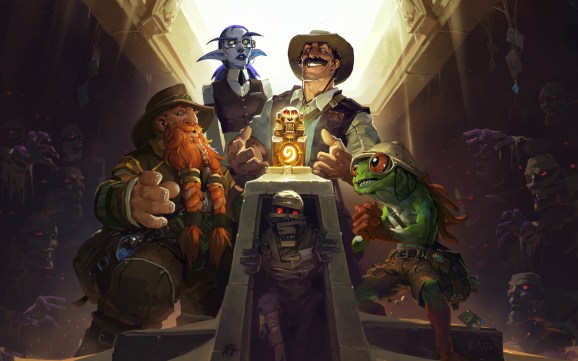 Elise Starseeker (second from left) will get a card in the upcoming Journey to Un'goro set.

Senior producer Yong Woo confirmed that the master cartographer will get a new card in the upcoming Journey to Un’goro expansion during the 200th episode of The Angry Chicken, a popular podcast that covers Hearthstone. A Blizzard spokesperson also confirmed this over email. The Legendary card debuted in The League of Explorers, which will cycle out of the card game’s Standard rotation (and competitive play) when the new set launches in early April. Blizzard Entertainment’s Hearthstone is the leader in the $1.4 billion card game market, and expansions and memorable characters like Elise Starseeker help keep players engaged — and buying card packs.

Woo also said that Elise Starseeker would be the only member of The League of Explorers — which also includes Sir Finley Mrrgglton, Brann Bronzebeard, and Reno Jackson — to receive a reprint in Journey to Un’goro, which Blizzard introduced last week. It has a primeval dinosaur theme, but it also features The League’s master cartographer and a group of adorable junior explorers, which Woo also confirmed wouldn’t be cards.

Elise Starseeker is among the first batch of lore that Hearthstone added to Warcraft, a significant design evolution for the creative team. Its designers had stuck to adapting existing canon when it made earlier sets, like Goblins vs. Gnomes and Blackrock Mountain. Other Legendary cards to get reprints in earlier sets include Ragnaros The Lightlord and Deathwing Dragonlord.