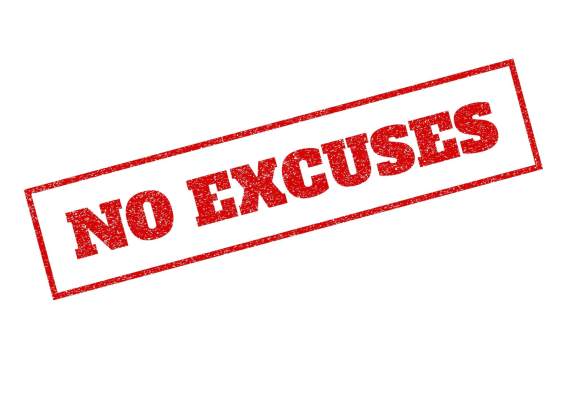 Getting ready for our next semester’s class, I asked my teaching assistant why I hadn’t seen the posters for our new class around campus. Hearing the litany of excuses that followed –“It was raining.” (The posters go inside the building.) “We still have time.” (We had agreed they were to go up a week ago) — I had a strong sense of déjà vu. When I took the job of VP of Marketing in a company emerging from bankruptcy, excuses seemed to be our main product. So we created The No Excuses Culture.

No excuses as a core value

In addition to customer discovery, creating end user demand, and product strategy, Marketing also serves as a service organization to sales.  It drove me crazy when we failed to deliver a project for sales on time or we missed a media deadline. And I quickly realized that whenever there was a failure to deliver on time, everyone in my Marketing department had an excuse. Making excuses instead of producing timely deliverables meant we were failing as an organization. We weren’t supporting the mission of the company (generate revenue and profit), and the lack of honesty diminished our credibility, and our integrity.

And with no consequences our entire department acted as if schedules and commitments didn’t matter. I heard a constant refrain of, “The sales channel brochure was late because the vendor got busy so they couldn’t meet the original deadline.” Or “the January ad had to be moved into February because my graphic artist was sick, but I didn’t tell you because I assumed it was OK.” Or, “We’re going to slip our product launch because the team thought they couldn’t get ready in time.” I had inherited a department with a culture that turned commitments into vague aspirations.  We had no accountability.

I realized that for us to build a high-performance marketing organization that drove the company, this had to change. I wanted a department that could be counted on to deliver. One day I put up a sign on my door that said, “No excuses accepted.” And I let everyone in the marketing department know what I meant was, “We were all going to be ‘accountable’.”

I didn’t mean “deliver or else.”

By accountable I meant, “We agreed on a delivery date, and between now and the delivery date, it’s OK if you ask for help because you’re stuck, or something happened outside of your control. But do not walk into my office the day something is due and give me an excuse. It will cost you your job.” That kind of accountable.

And, “Since I won’t accept those kind of excuses, you are no longer authorized to accept them from your staff or vendors either.  You need to tell your staff and vendors that it’s OK to ask for help if they are stuck.  But you also need to let everyone in your department know that from now on showing up with an excuse the day the project is due will cost them their job.”

The goal wasn’t inflexible dates and deadlines, it was to build a culture of no surprises and collective problem solving.

I don’t want to make implementing this sound easy. Asking for help, and/or saying you were stuck created cognitive dissonance for many people. Even as we publicly applauded those who asked for help, some just couldn’t bring themselves to admit they needed help until the day the project was due.  Others went in the other direction and thought collective problem solving meant they could come into my office, and say they “had a problem” and think I was going to solve it for them without first trying to solve it themselves. As we worked hard on making “no excuses” part of our culture some couldn’t adapt. A few became ex-employees. But the rest felt empowered and responsible.

Everything is “priority one”

One other thing needed to be fixed before we could implement “no excuses.”  I realized that my groups inside of marketing had become dumping grounds for projects from both inside and outside of marketing – with everything being “priority one.”  There was no way for us to say, “We can’t take that project on.” And yet, simply accepting anything anyone wanted Marketing to provide was unsustainable.

We quickly put in a capacity/priority planning process. Each marketing group, (product marketing, marcom, trade shows, etc.) calculated their number of available man-hours and budget dollars. Then every week each department stack-ranked the priority of the projects on their plate and estimated the amount of time and budget for each. If someone inside of marketing wanted to add a new project, we needed to figure out which existing one(s) on the list we were going to defer or kill to accommodate it. If someone outside of marketing wanted to add a new project before we had the resources, we made them decide which of their current projects they wanted to defer/kill.  If we didn’t have the resources to support them, we helped them find resources outside the company. And finally, each of the projects we did accept had to align with the overall mission of the company and our department.

Over time, accountability, execution, honesty and integrity became the cornerstones of our communication with each other, other departments and vendors.

We became known as a high-performance organization as we delivered what said we would – on time and on budget.

That was it. Four bullets. It defined our culture.

[This story was originally published on Steve Blank’s own blog.]