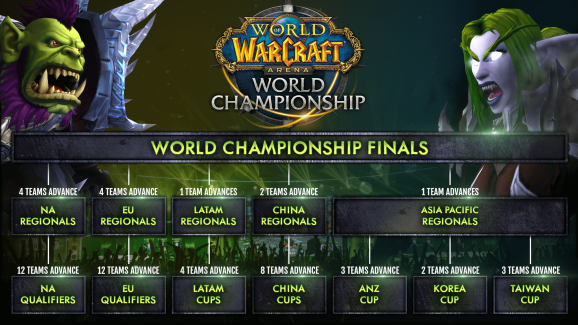 More teams and more money are coming to World of Warcraft’s esports scene.

Blizzard today detailed the 2017 for World of Warcraft’s 2017 Arena season. Arena pits two teams of three players against each other. The top squads go on to compete at BlizzCon, Blizzard’s yearly fan event in November. The esports market is expected to be worth $696 million in revenues in 2017, according to market research firm SuperData.

Arena launched and brought World of Warcraft into the esports world in 2007 along with the online game’s first expansion, The Burning Crusade. This year, Blizzard is having open signups, meaning that teams don’t need a minimum rating in order to register. Once signed up, teams can qualify for Regional Championship events by earning points from victories at qualifier cups and approved fan competitions.

The Region Championships and World Championships will feature 12 teams from North America and Europe each, up from eight last year. You can get a better idea of how many teams will compete and how they’ll advance in the image above.