Fantastic Contraption was one of the more creative virtual reality games that debuted last year on the HTC Vive and the Oculus Rift VR headsets. Now it’s coming to the PlayStation VR in April.

I had a hands-on preview at Sony’s game headquarters in Foster City, California. And if you’re part of the Minecraft generation, you might like building contraptions that solve difficult physics problems.

In this game, you build machines that can function in the VR environment. The object is to make a pink dot move from one part of the play space to another, making it go through a pink block. You can do this task with minimalist effort, or you can create a crazy contraption with all sorts of parts.

With the Vive version, you could create life-size machines as tall as you could reach.

But with the PSVR version, the objects are on a smaller scale. You look at it from above, in a third-person view of the puzzle space. You can move around to get a different view a little, but you can’t block the view of the camera to your hands, or else the system will lose tracking.

But it preserves a lot of the original’s feeling. You can grab an object with a move controller in your right hand, and then you can pull on the object, like a rod, to stretch it out to a larger size. You can resize objects until they fit just right in your contraption. The tool box is in a cat named Neko because, well, that’s what the developers decided to create. 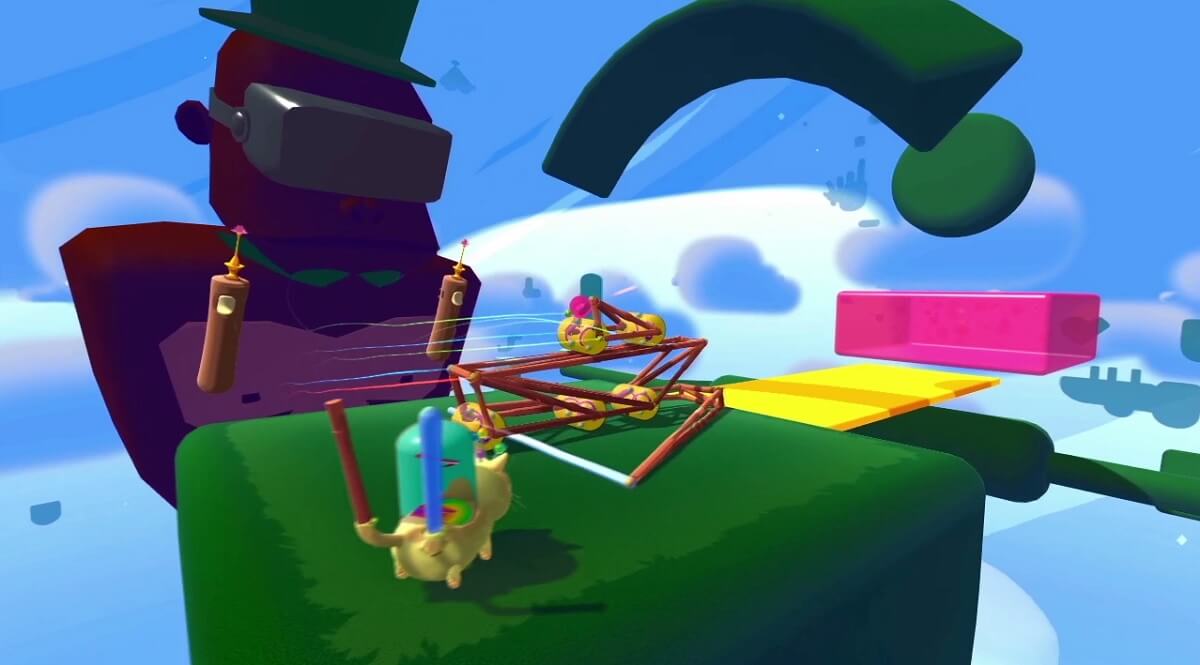 Above: You have to get a pink dot into a pink box in Fantastic Contraption.

The game was originally made by developers Northway Games and Radial Games for the web browser in 2008, and now it will debut for PlayStation fans in the not so distant future.

I managed to create a few primitive contraptions that rolled forward and barely completed the tasks of moving the pink dot to the right place. It has 50 levels and an infinite number of possible solutions. You can do things like build your own musical instruments to add a soundtrack. The world is a pretty place, with blue skies and green landscapes. You might get lost in it for hours.

Northway Games was founded by Vancouver, Canada-based couple Colin and Sarah Northway. They teamed up with Radial Games of Santa Monica, California, and Vancouver to make the game.