StarBlood Arena is first-person shooter for the PlayStation VR that will make you feel like you’re rolling around in a barrel.

Fortunately, I didn’t get nauseous when I played StarBlood Arena in a hands-on preview at Sony’s offices in Foster City, California. It has plenty of fast action and movement that enables you to move in any direction, but it is crafted in a way that doesn’t make you sick.

The flight combat shooter reminded me of Descent, the 360-degree PC and console game that debuted way back in 1995. Only this time, you’re flying around and fighting in virtual reality. You navigate using the controller sticks in a battle pod, which is a platform that allows you to fly and shoot at other players.

“It’s more like a six degrees of freedom arena shooter,” said Jay Koottarappallil, the CEO of WhiteMoon Dreams, said in an interview with GamesBeat. “It’s a lot less flight simulator and a lot more arena FPS.” 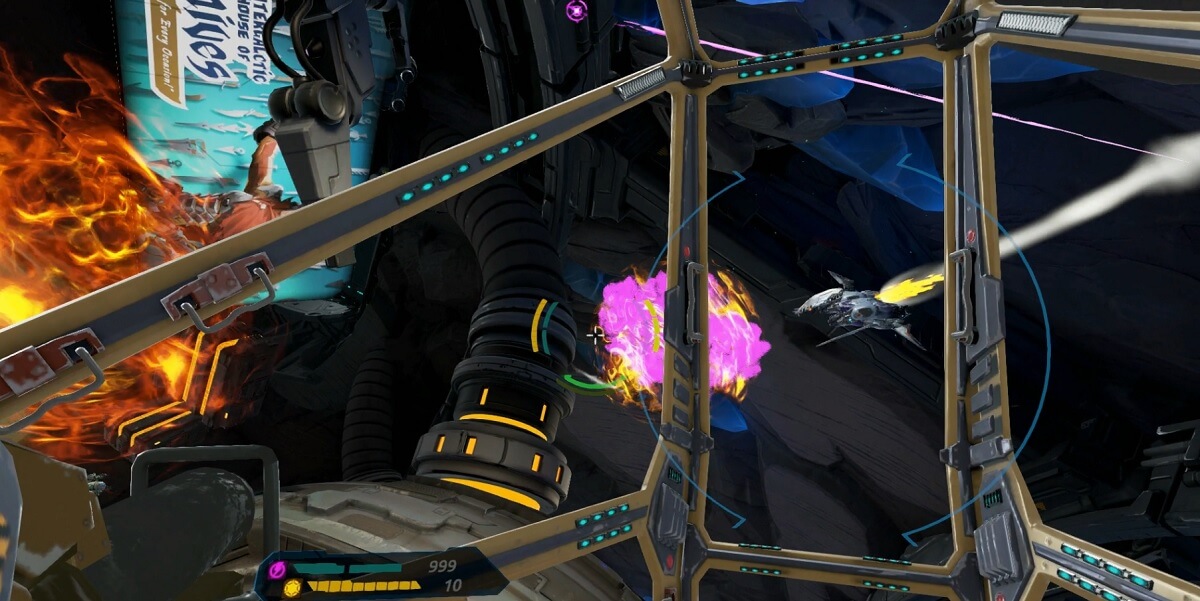 Above: StarBlood Arena has combat for up to eight players in VR.

It’s a close combat game, and if you get on someone’s tail, you can take them out in a few seconds. But it takes multiple shots to get a kill, so you have to fly well enough to stay on the target, which is likely trying to get away from you. I managed to get four kills in my first game, which is more than I usually get in my first try at a new Battlefield or Call of Duty. To me, that means the controls are good.

It is fast-paced and makes you sweaty, even though you are sitting and pushing buttons on a game controller.

“We don’t have a concept of ‘up’ in the game,” said Koottarappallil. “You’ll see green lava oozing on the ground and the same lava on the ceiling as well, so you don’t know which way is up.”

But I didn’t get sick because of the way the map was designed. It had various corridors in a grid shape, with pathways going up down and back and forth. There was an open arena in the middle, but the fighting space was tight. I felt like I was doing barrel rolls all of the time, but I didn’t get disoriented.

Players are competing in futuristic tournaments for fame, fortune, and survival. You can unlock ship modifications and customization options over time. The game was in research mode for a year, and it took about a year and a half to develop on top of that, Koottarappallil said. 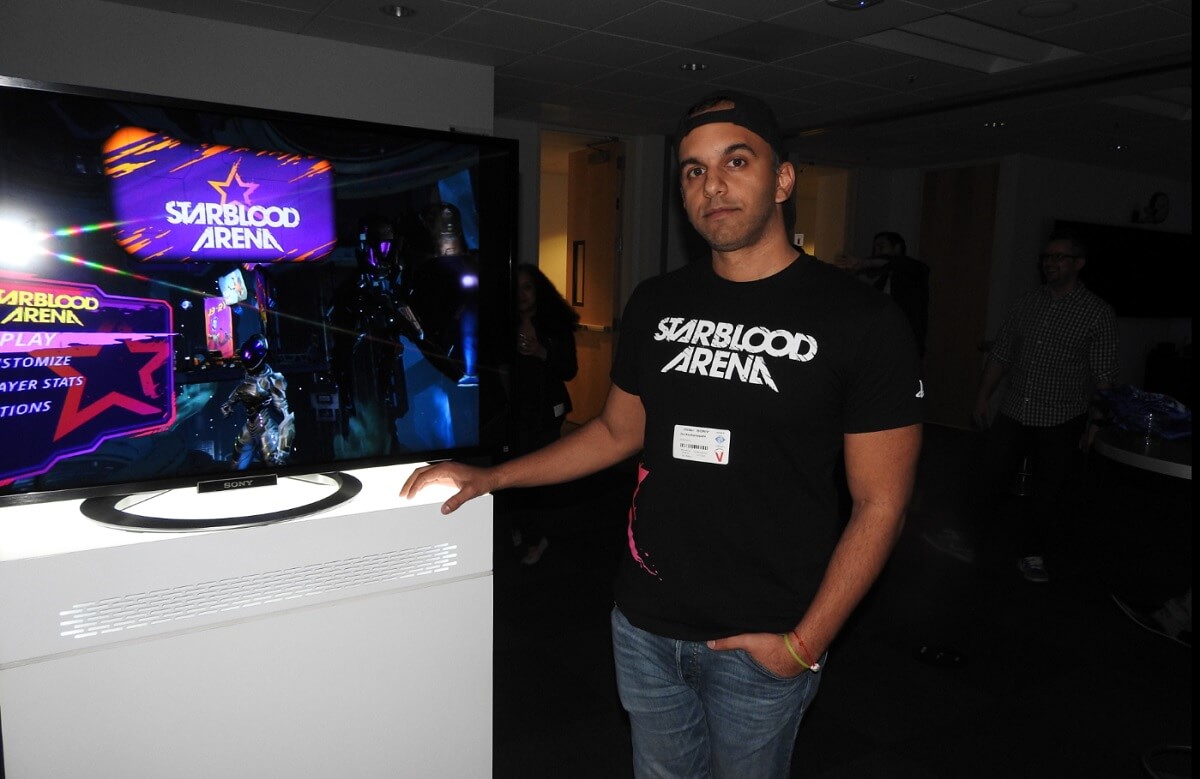 Above: Jay Koottarappallil, the CEO of WhiteMoon Dreams, with StarBlood Arena.

You can earn a heavy weapon that charges up during the match. You can play it with two to eight players in multiplayer combat modes or cooperative play.

“It’s got the learning curve of a first-person shooter game, and you have to master the flight as well,” Koottarappallil said.

The single-player skirmish mode is good for training. The game has nine different pilots, each with their own unique weapons, tactics, and play style. There are also a variety of customizable vehicles, or battle pods, with various paint schemes, attachments, and game-altering modes.

Sony is releasing the title on April 11 for the PlayStation VR platform. 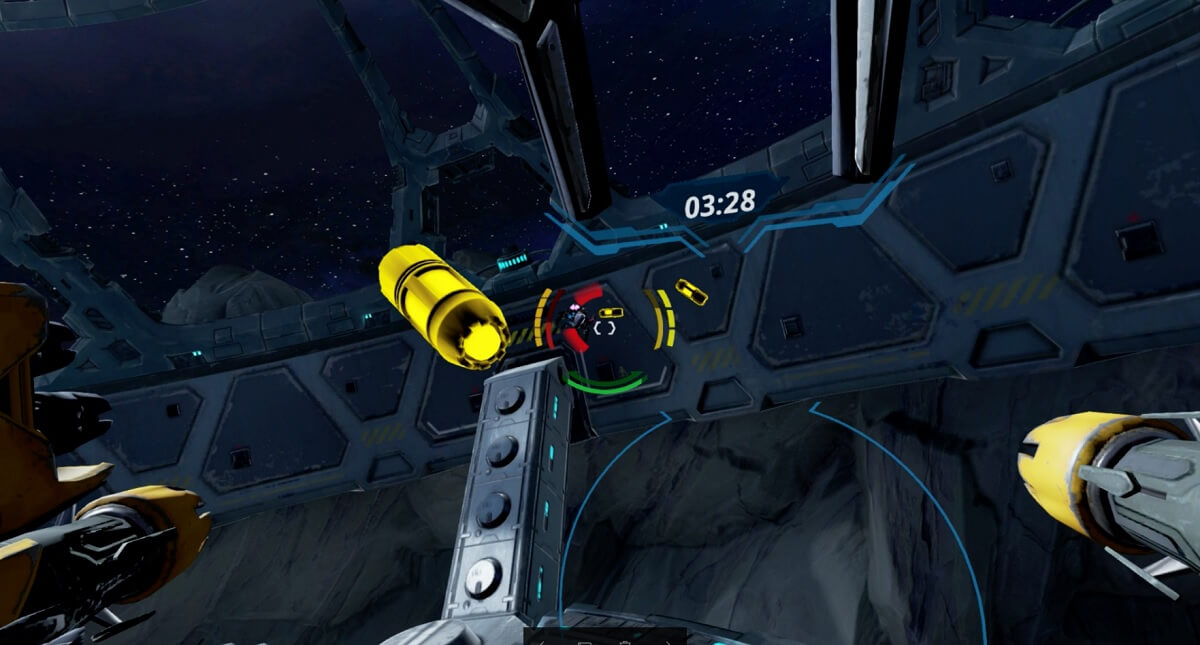 Above: StarBlood Arena lets you fight in battle pods in VR.