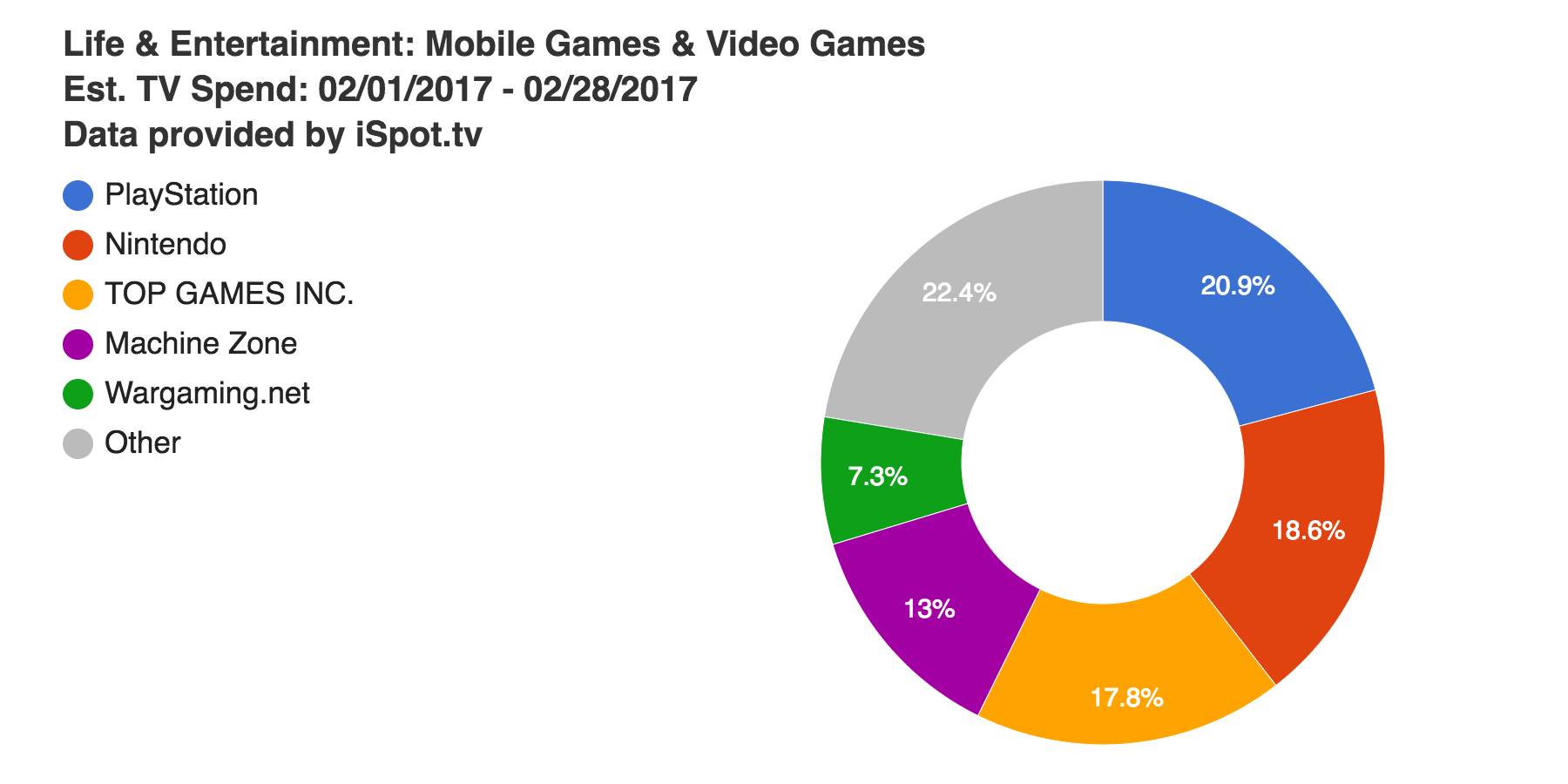 GamesBeat has partnered with iSpot.tv, the real-time TV ad measurement company with attention analytics from 10 million smart TV screens, to bring you a monthly report on how gaming brands are spending. The results below are for the top five spending gaming industry brands in February 2017.

Gaming industry spend skyrocketed in February thanks to Super Bowl LI — four of the brands on our chart ran ads during the big game, with PlayStation being the exception. Overall, 29 brands spent an estimated $73.6 million running 74 spots over 18,700 times, generating more than 2 billion TV ad impressions. Top Games Inc. and Wargaming.net returned to the top five after some time off.

Despite skipping the Super Bowl, PlayStation continues to lead industry spend with an estimated $15.3 million outlay in February, slightly less than its spend in January (est. $16.6 million). The brand ran nine spots over 2,700 times for a grand total of 375.3 million TV ad impressions. The commercial with the most spend (est. $5.6 million) was “Call of Duty: Infinite Warfare PlayStation 4 Bundle: Ultimate.” PlayStation spent the most on Fox, ESPN, and Comedy Central. Sports broadcasts also remained a priority, with the company shelling out for ads during college basketball and NBA basketball as well as airings during South Park.

Nintendo takes second place with a total estimated outlay of $13.7 million in February, or 18.6 percent of the industry’s spend. Its five spots ran over 2,400 times and racked up nearly 299 million TV ad impressions. The commercial with the most spend (which also ran during the Super Bowl) was “Believer,” featuring music by Imagine Dragons. In terms of network spend, Nintendo prioritized budgets across Fox, Adult Swim, and Cartoon Network; for specific shows, the brand spent big during the Super Bowl, Teen Titans Go!, and South Park.

Third place goes to Top Games Inc. with an estimated spend of $13.1 million on two spots that aired over 2,900 times and generated 264.1 million TV ad impressions in February. The bulk of its budget was devoted to promoting “Battle of Evony,” which aired during the Super Bowl as well as on other sports broadcasts such as college basketball and Fox College Hoops Extra. Naturally, thanks to the Super Bowl, Top Games Inc. spent the most on Fox, with ESPN and AMC just behind it.

With an estimated February spend of almost $9.6 million, Machine Zone takes fourth place in the ranking. The brand aired three spots over 4,000 times which resulted in 264.8 million TV ad impressions. Its Super Bowl spot with Arnold Schwarzenegger, “Mobile Strike: Arnold’s One Liners,” had the biggest budget (est. $8.9 million). Machine Zone spent primarily on Fox, NFL Network, and Fox News, as well as putting budget toward other sports-related programming besides the big game, such as Super Bowl Classics and Top 10.

Wargaming.net is in fifth place with 7.3 percent of the industry’s spend, which amounts to an estimated $5.4 million February outlay, with almost all of that going toward its two Super Bowl spots: “World of Tanks: Teensy House Buyers” and “World of Tanks: Real Awful Moms.” Overall, Wargaming.net aired three ads a mere 22 times, but managed to generate over 123.6 million TV ad impressions. Its budget was focused toward Fox, TNT, and History Channel, with spend on specific shows going to Super Bowl LI, NBA basketball, and American Pickers: Bonus Buys.