While the throngs were attending the Game Developers Conference in San Francisco, we had our own GamesBeat event nearby at a breakfast sponsored by Akamai.

We invited 25 CEOs and executives at virtual reality startups to discuss how to survive a possible drought of funding and slow consumer growth in VR. Our speakers were Greg Castle of Anorak Ventures and Tipatat Chennavasin of The Venture Reality Fund. Nelson Rodriguez of Akamai introduced us, noting that the aim was to get to strategies that could benefit everyone.

Castle was one of the early investors in Oculus VR, before it was acquired by Facebook in 2014 for nearly $3 billion. He formed his own fund to invest in VR and other fast-growing tech markets, and he has made 33 investments so far. Chennavasin said he has met with more than 1,800 startups in the past year, and he logs them in his chart that maps out the VR industry below. 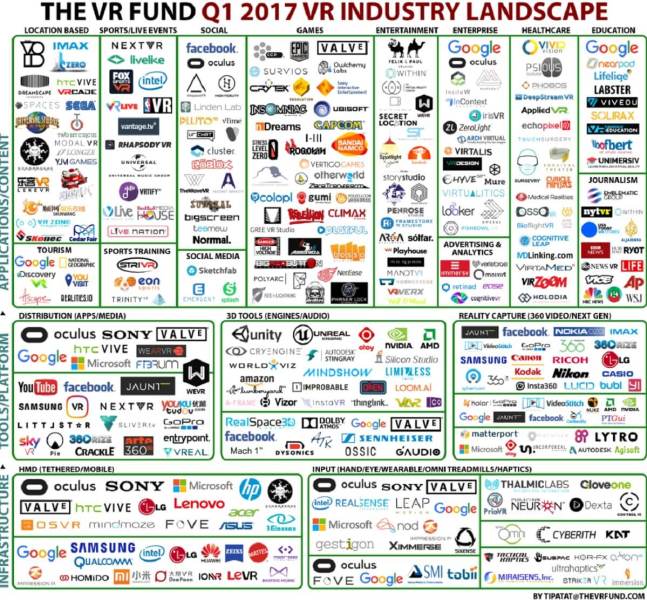 GB: Everybody here knows that the VR launches didn’t quite go as well as everybody predicted. Digi Capital predicted that AR and VR would be $150 billion in revenue by 2020. That was probably the first prediction. Now the forecast is for $108 billion in 2021. It’s been shaved back twice. Everybody expected that to happen. That’s a starting point. Now, what do you do in a market that’s slower to take off than expected?

Greg Castle: In my previous life I was an entrepreneur in a totally unrelated field. I was in the restaurant business. Then, from 2010 forward, I was in the video game business, always on the tools side. I worked for a small company called Scaleform that was bought by AutoDesk. Then I worked for AutoDesk for a couple of years in their technology group – MAX, Maya, and a bunch of realtime tools.

I started to get involved in the startup scene. A couple of very close friends of mine founded Oculus. Those were also the founders of Scaleform, the first company I worked for. I had a great opportunity to invest in Oculus. Financially it worked out very well, but more interesting for me was being in at the ground floor. There was an initial meeting between myself, Palmer Luckey, Brendan Iribe, Nate, Michael, in a restaurant a lot like this, where we all met Palmer for the first time. What started as a dinner amongst friends has essentially spawned this whole new industry. Being on that journey, having a front row seat to everything that’s happened, has been far more valuable than the financial rewards from Oculus. 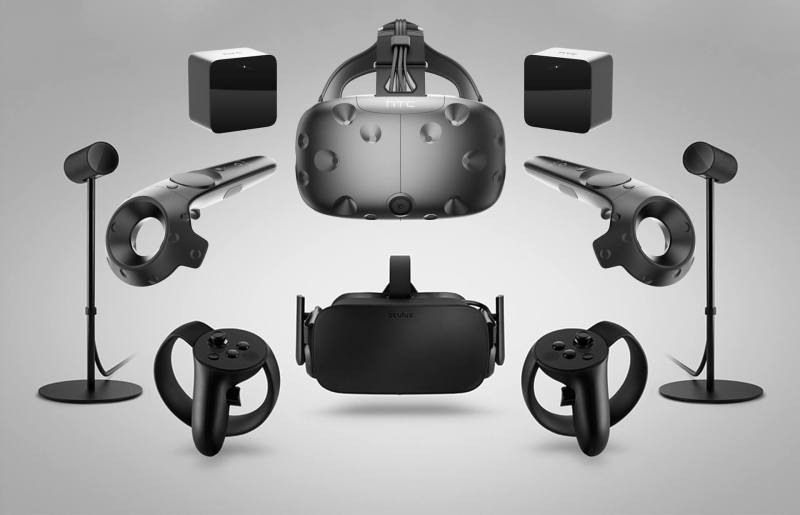 Since Facebook bought Oculus I’ve focused full time on investing. I now have my own fund, a small fund that focuses on emerging technology. Not just VR and AR, but also robotics and autonomous vehicles and computer vision and sharks with lasers on their heads and a bunch of other cool shit. That’s where I am today. I’ve made about 33 investments now. A third are in VR and AR and the rest are in tangential fields. I’m happy to be here today.

It’s worth pointing out the difference between people who weren’t in the industry, weren’t in the know, and their thoughts on VR, versus those of us who’ve been in it all along. Everyone who’s been in it all along has known there was going be this trough of disillusion. We all knew it was coming. Now it’s more a question of managing expectations. You have other people seeing sales figures that aren’t as impressive as they thought they would be, but again, those of us in the know knew this was going to be a slow build.

As a result, my advice has always been that this is going to be a long road. Raise more than you think you’ll need. Manage your burn as closely as possible. It’s easy to get caught up in the hype that’s going on now. It’s easy to take some of this money that’s being thrown at VR companies, although maybe a little less so just now. But that hype is still just hype. These people are not concentrating on a sustainable long-term business when this money is coming in. Be cautious. Know that when it comes to the VR industry, you guys probably know a lot more than any of the investors that you’re talking to. Manage accordingly.

Tipatat Chennavasin: I’m co-founder and general partner of the Venture Reality Fund. We’re a $50 million fund focused on VR and AR. My background comes from the interactive space. I’ve been an artist and designer. I’ve owned mobile game startups. I was in social games, which was terrible. But I’m from the indie game scene.

Right now in VR is the best time for indies. It’s the most exciting time. It’s very early. Everyone knew—there’s a lot of talk about how VR isn’t doing as well as we hoped. If the PSVR was gathering dust on shelves, that would be a disturbing scene. But it’s been sold out since December. Sony said they’ve done a million. They’ll have more ready in April. It’s going well.

I was at a conference run by a consumer insights company. They do a lot of consulting for the media industry, and they were trying to understand VR and consumer behavior around VR. They found that the people who got VR over the holidays, their satisfaction was through the roof. This was across the board. Even terrible Cardboard VR. The excitement and enthusiasm—we’ve all demo’d VR to people and seen how they respond to it.

The most interesting thing is, when we look at what VR is doing, it’s not just about hardware sales. How are software companies doing? How is the ecosystem doing? I look at the Wii. It was a great product for Nintendo, but it was a shitty game platform for any third-party developer. With the Vive we’re seeing very much the opposite. Small initial sales, maybe 500K, but against the Vive at least nine software titles have generated more than a million dollars in consumer revenue. This isn’t just support from the platforms.

You’re not going to make a $5 million game and get $30 million back yet. But if you’re a smart indie studio and you’re doing a $300K-$500K game, you can be profitable within a year. We’ve seen that happen with many teams. We have to walk before we run. The signs are positive.

What’s also great—when we were first looking at VR, everyone was looking at VCs for funding. For the games industry, that’s a terrible idea. You have to get that platform money and raise those publishing deals. When Oculus goes up on stage and says, “We’ve spent $250 million to fund VR projects in the last two years,” that’s amazing. And they’re going to do another $250 million, which is even better. Then we have people like IMAX doing VR arcades. They have a fund of I think $50 million. We’re seeing people stepping up to fund content, which we haven’t seen happen in the industry in a long time.

If you talk to VCs, they’ll say something like, “Well, once you’ve got your publishing deal, come talk to us and we’ll help you fund your company.” Funding content is not what a tech VC is good for. But we’re seeing a lot of money from Google, from HTC, from others. Right now is the best time for indies.