GB: Is there also a kind of ranking you’d put to that? Who is expected to invest the most from among the platform companies?

Chennavasin: Definitely Facebook and Oculus and HTC are investing a lot. Google as well, for the Daydream platform. They’re writing real checks. They’re not $50K checks, $100K checks. They’re trying to stand up teams. We’re going to see more. LG is jumping in the ring. Microsoft. Qualcomm. Intel. Hopefully Apple. As more people jump in they’ll need more exclusives and that will mean more money. Intel, Nvidia, AMD, the chip companies are throwing money at developers to help the ecosystem. It’s a good time for small indies to take advantage of this.

Castle: That’s sage advice, especially around looking to publishers for funding. I don’t know what’s been announced about Microsoft yet, but I feel like Microsoft is the 800-pound gorilla. They’re the ones to watch by the end of this year. I like their strategy. I haven’t read the tests on the Lenovo, but they have good people working on hardware for their platform. I don’t know what will happen with Scorpio, but I assume Scorpio will support all these things. It just lowers the barrier to entry. That’s another potential place to look for funding. They’re going to need launch titles.

GB: You do landscapes of the industry at VRF. You probably have a good idea of what companies are out there and in what kinds of categories.

Chennavasin: My claim to fame–the last two to three years I’ve been investing in VR and AR, I’ve talked to more than 1,800 potential VR and AR startups. Emphasis on potential. They’re not all real, although they’re all trying. Within the industry, I’ve seen it grow three or four times in terms of companies that actually have funding, have revenue, or have strong partnerships and are legitimate companies.

One thing I wanted to add, for PSVR, one of the concerns I had was that it was console, and so it would only be for AAA developers. They were only going to want to play the Batmans and the EA games. But then Owlchemy Labs created this weird game called Job Simulator. On paper it sounds terrible. But if you actually play it, it’s so much fun. They have more downloads and sales than Batman. Batman was a beautiful AAA game and it let you be Batman. But a game that let you be a short-order cook in VR outsold it. It just shows that, again, it’s a great time for indies, even on PlayStation. VR is that chance to flip the switch.

Question: Can you talk about the analyst numbers, and whether anyone took them seriously? If I had gone to you guys and said, “The market’s going to be huge!”—investors don’t take analyst numbers seriously. You don’t put analyst numbers in your deck. I didn’t take them seriously. Yeah, we didn’t hit them, but that’s like moaning because the Mariners didn’t win the World Series. Nobody expected them to. The reality on the ground is exactly what you said.

Castle: At the end of the day, everyone’s got their motivations. Digi Capital needs to sell their brand. Somebody needs to make a prediction. But I totally agree. The numbers were just silly.

One of the best things we can do as people who are invested in the industry is to not reinforce that kind of bullshit. When you talk to the press and to people outside the industry, speak cautiously. It’s very easy for people to realize that VR is the future, but speak cautiously. There’s going to be a lot of bumps along the road. We set ourselves up for disappointment if we start spouting off stupid numbers.

Question: Jason Rubin at DICE mentioned that Oculus is trying to be more open with their platform as far as how they’re restricting things. Do you think they’re going to move toward fewer exclusivity deals?

Chennavasin: I feel like the exclusivity thing is kind of a false flag. Most of it’s timed exclusivity. It just gives you time to make your port better on the other platform. It’s hard to do a simultaneous launch anyway. If I were you, I’d take exclusive money. Take whatever money you can get to help, because it’s going to be a while. It’s always timed, and sometimes it’s regional, too.

For multiplayer, the big opportunity is also VR arcades. Especially in Asia, we’re going to see explosive—that’s probably where we’ll see the biggest growth numbers. There are already 5,000 VR arcades in China. Granted, most of them are probably not run profitably or run well yet, but they’re trying to change that. There’s going to be a lot more investment in that space. We’re already seeing games that have 60,000 sessions a month. Those are the kind of numbers that show potential for growth.

Castle: There’s always room for negotiation when you’re talking to publishers. Maybe there’s an exclusive period, but ultimately you should be able to own the IP and go broader afterward. One other thing—this is just my theory, but I think Mark Zuckerberg invested in Oculus because he saw it as a future communication platform. Part of Facebook is that platform connecting everybody. You saw it in their strategy around using your Facebook login to do any number of things.

Long term, that’s probably his thinking behind Oculus and Facebook as well. Oculus has its own login at the moment, and then there’s a Facebook login, but I think we’re going to see more openness. That’s going to be the trend for sure in the future. 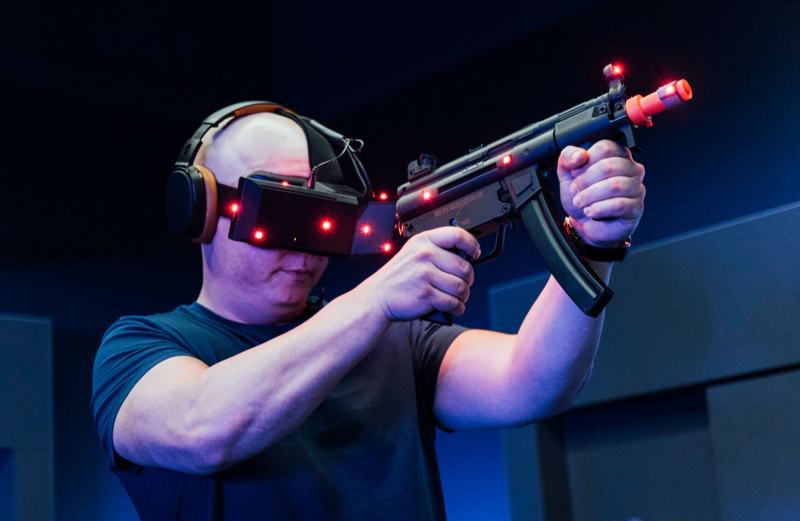 Above: Playing John Wick in VR.

Chennavasin: One thing I’d add for multiplayer games, you do have to understand the timing of VR and where we’re at. It is tough to do a multiplayer game and build up a player base. One of the things—we’ve co-invested in a company called Against Gravity. They make Rec Room, which is one of the largest social communities in VR right now. They made it free to get people in, but they’re growing that community and constantly updating every two weeks. They add new functionality and kill stuff that’s died off. They just launched a quest mode, and I don’t know if you’ve tried it, but it’s brilliant. It’s different from anything else they’ve ever done in the game, and it’s generated a lot of excitement and enthusiasm.

VR right now, we’re in this very early stage of experimentation. Nobody really knows what a great VR game is, and so we have to kind of reinvent what gaming feels like. One of the biggest problems I see right now—I see a lot of games in VR, but I don’t see a lot of VR games. We have to think properly about what is unique about VR and how you make games based on those mechanics. We think we know what a game is because we’ve always played a certain kind of game. We have to throw away that baggage and reinvent what we’re doing.

Those are the people who are succeeding. When look at what games are the most downloaded and the most played, they’re not all first-person shooters. They’re a broad variety of games. Even puzzle games. Final Approach, that weird air traffic control game, made more than a million dollars with something quirky and strange.

GB: Jason Rubin said last week that he’d made a mistake in funding one of Insomniac’s games. He said, “Here’s a bunch of money. Make this deadline and launch on that day.” Instead, he realized that what he should have done is just said, “Here, prototype for a long time until you get your loop ready.” You do have time. The longer you wait, the larger the installed base becomes.

Chennavasin: Another good rule is to make games that are potentially evergreen. If you’re not competing on the best graphics, your game won’t go stale when the tech advances. Look at Nintendo Wii games. The best Wii games at launch sold throughout the life of the console. If you have a game that works and plays great now in VR, it should easily work down the line.

Question: One thing that’s standing out and causing some anxiety is Magic Leap. I know people at Magic Leap who I respect, but there’s always the possibility that Magic Leap could fail spectacularly. I’d remind everyone that optical consoles, optical-game-based machines—that was a ten-year rollout with failure after failure, from the Turbografx to the 3DO, CD32, and many others. What we’re seeing here is a rough road, but it’s happened before.

Castle: I’ve said a couple of times, and most people agree—the question became “not if, but when?” In the beginning people were making some comparisons to 3DTV. But in the long term, when you experience the power the capabilities, there’s no doubt that this is the future of technology. But it’s definitely good to be reminded every now and again—this is something I became obsessed with at the beginning, looking at documentaries about failed technologies. I was so nervous that I was going all-in on VR and AR that I became obsessed with finding clips and stories and business cases about technologies that people invested a huge amount of money in and then fell flat on their face.