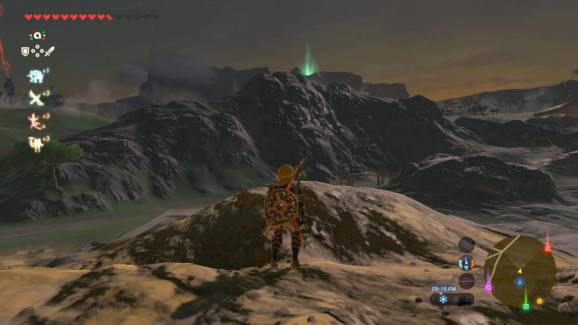 I should go to there.

I was investigating the Gerudo Highlands in The Legend of Zelda: Breath of the Wild when I noticed a strange glow a few kilometers to the southeast. After more than 100 hours in this game, I’ve learned that you should never ignore anything that looks peculiar.

After gliding, climbing, and battling my way over to the shimmering light, I realized that I had found something special — and here’s where the SPOILERS are going to start.

The greenish-blue beam led me into the den of the Lord of the Mountain, a magical steed that is surrounded by Blupees (bunnies that drop rupees when you shoot them with an arrow). I hadn’t seen or heard anything about this creature before, but I had a hunch I could mount it. I assumed that would get me a lot of gold or something else along those lines. But I also figured I could easily fail in my attempts to climb on a semi-corporeal horse god’s back, so I popped into the menus to save my game. Convinced I’d get another chance, I guided link into the Lord of the Mountain’s shallow pool.

After scaring away the Blupees, I was able to get close to the Lord of the Mountain, but then it all went wrong. The god noticed me as well, and it turned and sent Link to the ground with a charge. By the time I was able to stand up again, I caught the mountain lord vanishing into thin air and the blue glow surrounding us faded.

“No worries,” I thought — I’ll boot up the save I made right before this encounter.

Oh, but Breath of the Wild is never that simple. Loading that saved game restored everything back to the way it was before my blunder. I had the same amount of health, the same armor on Link, and the same weapons equipped … only the Lord of the Mountain, the Blupees, and the ethereal light were all gone.

Nintendo has somehow made a save system in Breath of the Wild that is gentle and respectful of the player while simultaneously respecting the magic of the game.

Unlike in something like Fallout or Skyrim, I can’t stumble across an amazing moment, quick bsave, and then make as many attempts as I want without consequences. In Zelda, I was able to save my spot and ensure my progress was safe, but I couldn’t abuse the system to ensure I would eventually capture the Lord of the Mountain. Instead, I had to get on with my journey and wait for the glow to return.

That preserved the magic of the moment I found myself in, and I love that the game won’t let me cheat myself of those feelings by cheesing the save system.

Of course, I eventually did get back to the Lord of the Mountain, and this time was much more careful, check out that spoiler-filled adventure below: