GamesBeat: Is it tough for developers to be on on the same game for so long?

Lagrave: Well, imagine you have to work in a tool that’s 10 years old to do something. There’s a level of, oh gosh, I’ve gotta open that up and do this. Okay, I will, because of course the tools improve with new games, and so sometimes you have to go back to older things that were built very long ago to try to get something to work.

Love: But then you’re also a master of it at the same time. On one hand, it’s like, oh, if we had a new engine we could do X. But there’s a certain amount of cleverness that you can employ just because you know every little nook and cranny of what that engine can do and how you can take advantage of it. You’re a master of it at that point.

You actually see some of that coming through in the Necromancer. Sometimes you get there just by throwing down the gauntlet, right? When we first said, yeah, that’s right, we’re doing it, the thing that came to my mind was that we needed to scale those 100 skeletons. How are we going to do that? We know that we can’t literally put 100 things like that on screen, on top of what’s already going on. But how do we get the feeling, how do we get there? It turns out there was a way. There was a way that fit right in with the engine. Those kinds of challenges are sort of at the heart of all game-making. You always work with those kinds of limitations.

Lagrave: Yeah. We have incredibly talented engineers, sitting there and humoring us and solving the problems of trying to do things like, hey, we need to have corpses on the ground such that the player knows about them, the server knows about them, they can be exploded, and it doesn’t kill the game or the server. And there might be four Necromancers doing that at any given time. Solve that for us, please? And they do! They’re fantastic and godlike in their ability. It’s awesome. 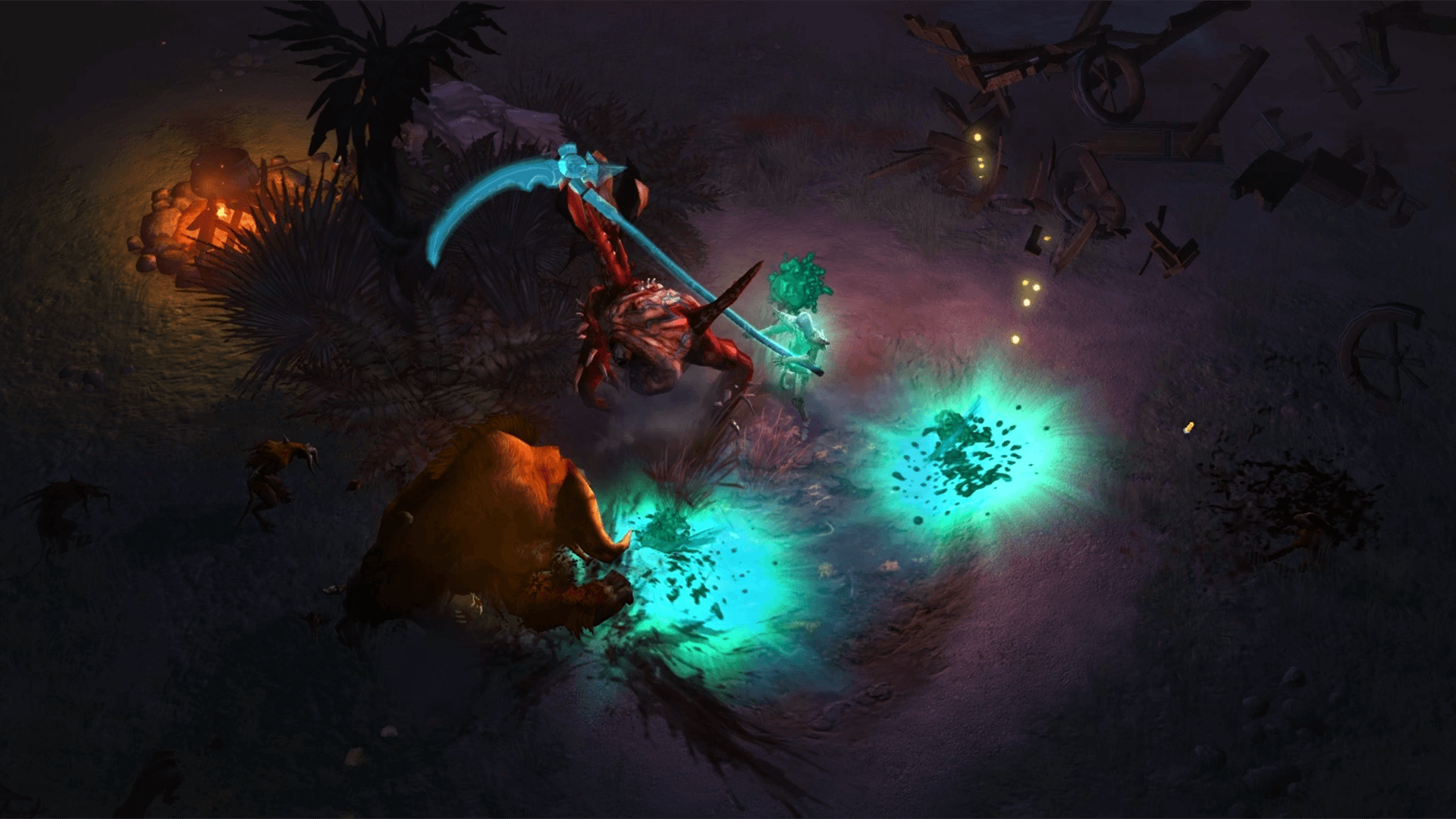 Above: Kill them all. They’re just demons.

GamesBeat: How do you make a pet class like the Necromancer feel active?

Love: If you look at the way we did it, one, we have skills that give you a different kind of axis of what the active button means. In most case, what we’re doing is just saying, if you’ve chosen a skill, the act of summoning is taken care of. That frees that button that’s already there to be used for another purpose, which we think generally speaking is more interesting – ordering that pet to do something. In the case of command skeletons, the skill we showed at BlizzCon, you can get them all to focus fire on a single target and take that target down very rapidly. In the case of Blood Golem, what you’re seeing is, oh, wow, I’m low on health, or there’s a bunch of monsters that need to die really rapidly. It can be one or both. You can order him to that spot.

Then we have some more surprises in store for what the button on those summonables can do in each case that would suit different builds. Today’s one, you have a close-up blood-themed play style where you’re losing health, so having lots of health recovery is what you want. Then you have the option to do that with the golem skill. Whereas another build that’s maybe more bone-oriented and doesn’t have blood loss as a theme, you might want to use that in a different way.

Lagrave: It’s a good point. The console handles very well. We started off as BlizzCon, and I wish we could have it here today, but — the console feels good. Because we’ve done very smart things like not individually targeting each corpse — at BlizzCon, you showed off the Army of the Dead. It’s a directional blast. It’s very friendly to a limited set of buttons. Of course Diablo itself is pretty friendly toward that control space as well. So you’re not frustrated. It actually plays really well on console. Like Julian said, the directional stuff for the Command on the Undead — it’s not challenging. It’s understandable and easy to do.

GamesBeat: Going back to the Necromancer, this nostalgia for it — a year or so ago, it showed up in Heroes of the Storm. Did that happen completely independently of this?

Lagrave: Those conversations, they have a bit of a runway to get that kind of stuff done. We’ve been talking about — they have ideas about who they want to bring in. They start working on all that stuff independently of us, because we’re a different team. So that was an independent thought. It just sort of rekindled a notion that’s always been kicking around – yeah, what about the Necromancer? But yeah, that was independent. 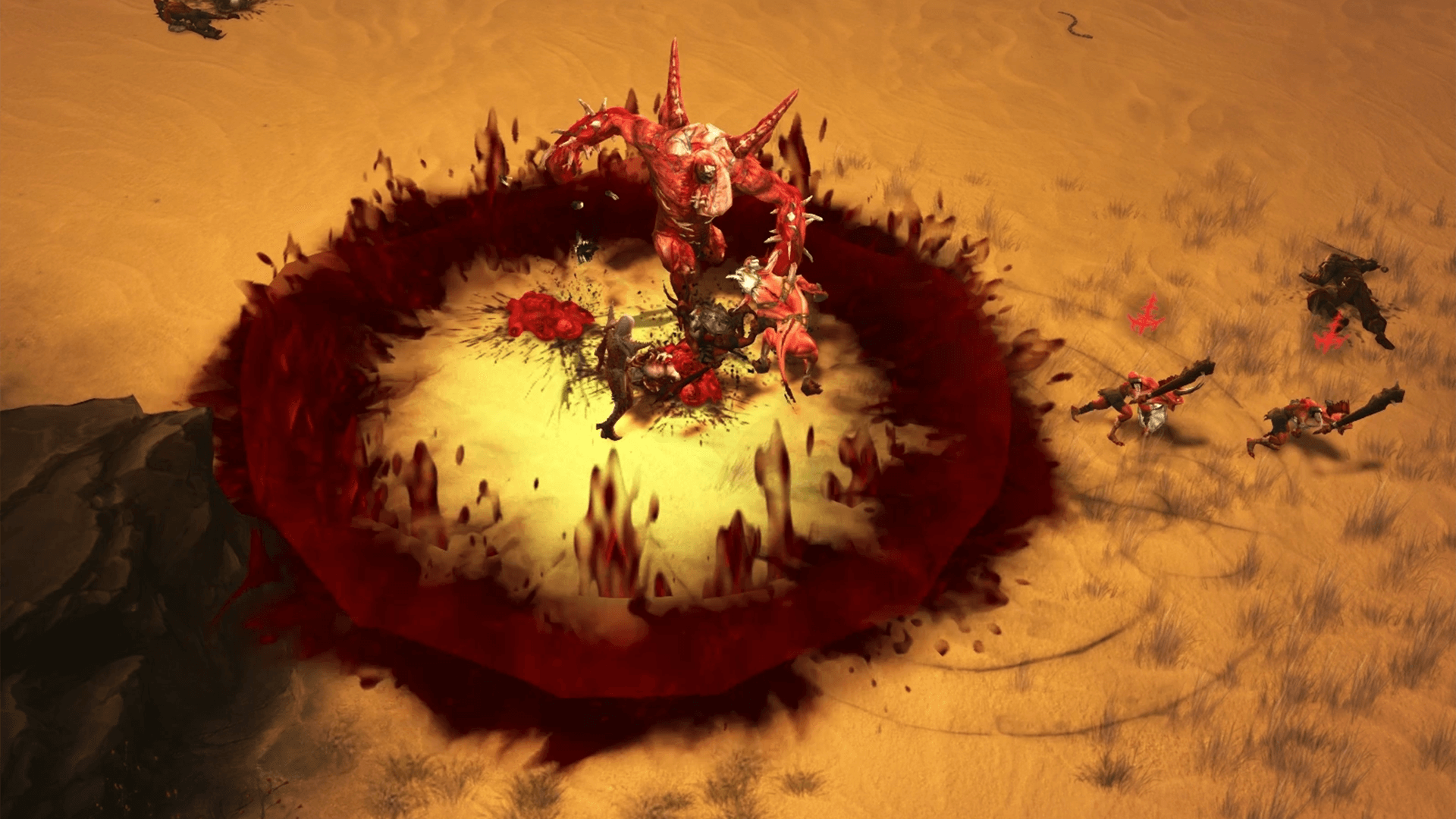 GamesBeat: I play a Blood Death Knight in World of Warcraft, so I had a very different idea of what a blood character would be. I thought it was interesting that this one was much more about literally attacking with blood while the Warcraft concept was more about just siphoning life from enemies.

Lagrave: Yeah, it’s a different fantasy with the Death Knight, being out there with your weapon and beating the crud out of something and getting that blood as a resource. Whereas what Julian and his crew have done is basically put it in your face and blown it out. It’s awesome.

Love: The class has to fit in with the viscerality of Diablo’s gameplay scheme. Specifically Diablo III. All three versions have had a certain visceralness to the way the action works, but definitely there was a concerted effort to crank that up for Diablo III. And so that was another thing where we really had to translate the Necromancer into that game, differentiating from other games. He has to match what else is going on, because the other classes are so visceral. Naturally, blood everywhere.

GamesBeat: Before Diablo III, expansions for the series always added two characters. With Diablo III, you release one new character at a time. Is it a problem to see so many people playing the same class when they’re released?

Lagrave: It’s not a problem. Of course there is that interest, right? When we released the Crusader, there was certainly a massive interest in the Crusader. But to be quite honest, I was playing other classes and I didn’t jump on to the Crusader until — I don’t know which season. Four or something? I took a while to get to the crusader. I won’t be surprised if people say, oh, I really want to do this monk build this season or what-have-you, and then get to the Cecro later. Of course we want them to. You’re going to see some Necros, definitely.

Love: We’re fully preparing for four Necromancers on screen simultaneously as what will happen on day one. We will be fine.

Lagrave: It’ll be awesome, is what it will be. What I want to see is the four Necros doing the Army of the Dead. Just obliterate some stuff. That’ll happen. For sure it’ll happen.