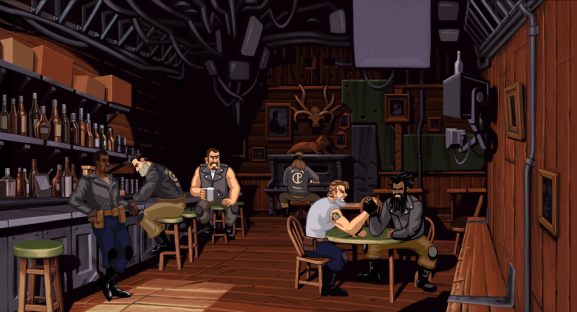 It’s time to rev up the nostalgia engine.

Double Fine Productions announced today that Full Throttle Remastered is releasing on April 18 for PlayStation 4, Vita, and PC. It’ll cost $15. This update adds new hand-drawn and 3D art to the classic point-and-click adventure game that first came out for PC back in 1995.

Full Throttle takes place in the near future where anti-gravity vehicles have replaced normal cars and bikes. It stars Ben, the leader of a motorcycle gang that has to clear his name of a murder charge.

The title came out in a time when LucasArts was creating classic after classic in the adventure game field, many of which Tim Schafer worked on. Schafer would later start his own company, Double Fine, in 2000. Double Fine has created remastered versions of some of Schafer’s other classics from his time at LucasArts, specifically Grim Fandango and Day of the Tentacle.

Just like with those remasters, players can switch between Full Throttle’s original look and the updated visuals whenever they want. The rerelease also feature developer commentary.