David Jaffe’s Drawn to Death debuts in a couple of weeks as a “hybrid shooter brawler” arena combat game for Sony’s PlayStation 4. In an interview with GamesBeat, veteran game designer Jaffe — creator of titles like Twisted Metal and God of War — referred to it as Quake meets Super Smash Bros.

Jaffe’s team at The Bartlet Jones Supernatural Detective Agency has worked on the unconventional game for more than three years, and it is finally ready for its debut on April 4 as a PlayStation exclusive. Over time, the team will update the game with new modes and other things to keep it going.

The artwork in the third-person, four-player multiplayer game is a crazy quilt of images from the mind of a 16-year-old high school student in the game. The teen’s doodles in his notebook spring to life, and they take shape in the arena in a very imaginative way. The battle maps are full of both the doodles and the crazy creatures from those pencil-sketch drawings.

Jaffe said in our interview that some people might view the game superficially as a crude title — akin to something like Duke Nukem — where asshole characters bad mouth each other and slay each other in brutal ways. But Jaffe said the game has his own brand of self-aware humor which he desperately hopes the audience will grasp.

And he also said that the story of the main character is told in ways that are very creative. You will, for instance, be able to read doodles about the teenager that reveal the kid’s state of mind after his parents’ divorce. It is only in the actual gameplay that these parts of the game’s back story are revealed.

For the first month, Drawn to Death will be a free title for PlayStation Plus subscribers. After that, it will be a $20 purchase.

Here’s an edited transcript of our interview. It’s a long discussion, but I found it to be wonderfully deep. 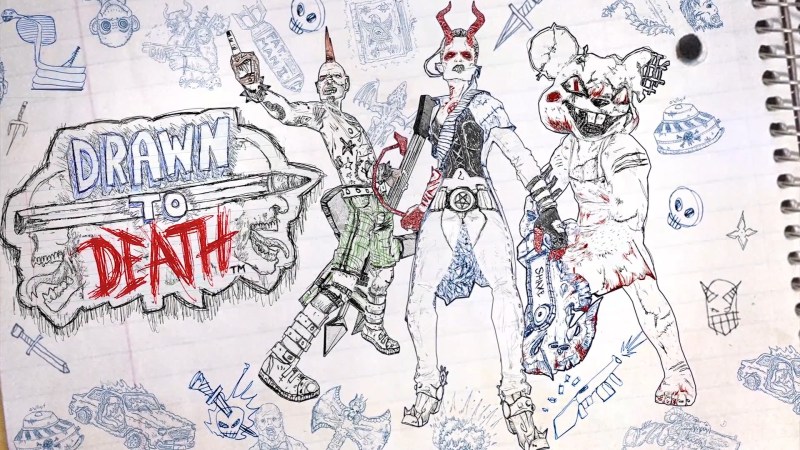 GB: How’s the game going here? How long have you been working on it?

David Jaffe: We started in 2013, I think. A while. A little over three years. We started the company and the game all together. Probably the first year and a half was just gearing everybody up and getting the tools set up. We’ve probably been in production for about two years.

GB: What was the original idea?

Jaffe: Thematically, it started as stick figures. I can’t really draw, and so I remember drawing this image of a stick figure drawing back to just nail another stick figure with a volleyball, a dodgeball. I remember the title I wrote at the time was “Hyper Violent Super Big Headed Stick Figure Violent Dodge Ball.” That was in my head for about a year. We were just starting Twisted Metal, and I said, “I want to make that game one day.”

Obviously we evolved the dodge ball out of it and evolved them from stick figures, but the idea of drawing characters in a notebook, and then as we started to really massage the concept, we said, “Well, are these drawings in a therapist’s office for kids? What is this book?” Very quickly it was like, “This should be notebooks we doodled when we were kids in high school.” The art style shifted away from stick figures to what you see here.

The intent is that the artist, the kid, he’s not a trained artist. He’s not some 16-year-old savant. He doesn’t have brilliant artistic skills. He’s just very imaginative, bored, dealing with normal teenage stuff. One thing I like about the game — the mechanics came first. We wanted to put our stamp on a shooter. I love heavy mechanics-based games. I love competitive games. For me a lot of shooters have become so much about a metagame — leveling up, upgrading weapons, prestige, all that wonderful stuff — we said, “Let’s see if we can concentrate more on the moment to moment battlefield engagement between you and an enemy.” Can we somehow enrich that experience and bring something new to the shooting?

It evolved into this shooter-hybrid brawler. We’ve been describing it as a cross between Smash Bros and Quake. That’s where we ended up, our key inspirations. But the other part of it — being in high school, being about this kid’s life — what I love about that is, even though it’s very much a mechanics-heavy game and very much a multiplayer game, observant players will find, whether you’re talking about just little hints around the classroom, or the various characters that start to show up—something begins to make its way into the doodles.

You have the girl here that he’s clearly into. As you explore the notebook, explore the skybox — I’ll show you some of the stuff.

Jaffe: He’s just drawing stuff. He’s not thinking about games. He’s just drawing characters. If you explore enough — this comes from the time my kids were playing a lot of Minecraft. I don’t know how familiar you are with the fiction of this character named Hero Brian. Steve is the main mascot of Minecraft. That’s the guy you see in the press art and all that. There was kind of an evil dark version that a lot of gamers who are into Minecraft would call Hero Brian. He was supposed to appear in the Minecraft landscape and follow you, and if he looked at you you’d die.

It was total urban video game legend. At the time, the Mojang guys were like, “No, that doesn’t exist.” But I loved that on YouTube — my kids would obsessively search for these videos of storytelling and world-building that wasn’t an elaborate cutscene, but it was just things you’d see off in the distance, in the background. A lot of that philosophy found its way into Drawn to Death. My hope is that people play the game, love the game, and in loving it start to explore a bit. It’s certainly not meant to be something you come to like Last of Us and it tells you a story. But story is all over Drawn to Death. You wouldn’t know it. It’s just a question of where you look.

For example, if you go into the stat screen and start to look at characters, all of the characters he’s drawn, there are cell phone communications between the kid and that girl at the beginning of the class. He’s explaining the impetus or the inspiration behind each of these characters. This character Alan is based on his stepdad, who he can’t stand, who runs a chain of Magic Mouse Burgers and Fun restaurants.