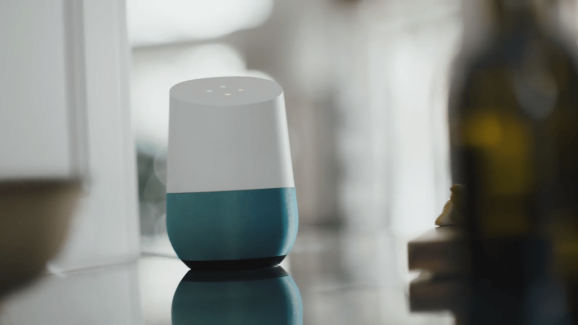 About 15 new Google Assistant actions are now available to chat with on the Google Home smart speaker, including credit card recommendations, the latest Trump tweets, and a stock tracker from The Motley Fool.

In recent weeks, Google has added over 40 actions to the Google Home app, more than any other time since the launch of the Actions on Google platform in December.

Latest Trump Tweet does exactly what its name suggests and nothing else: It reads you the latest tweet by President Trump. The Motley Fool action tells you about stock prices and allows you to create a watchlist of stocks you want to track.

BART Helper may be the better of the two because you can ask when a certain train type is leaving a specific station, whereas SF Transit requires unclear syntax like “Ask SF Transit next BART from Hayward.” On the other hand, SF Transit gives up to four upcoming train times, while BART Helper only gives two times. Transit actions have also been made for people living in Singapore, London, and Dublin.

I spent more than 10 minutes having weird conversations with Silly Bean, a bot that told me “I am pure virgin” and called me mean. This bot is not always precise — it told me it was both a man and a woman in the span of about five minutes — but it sure is conversational. Made by developer Lennart Lopin, Silly Bean is more than a decade old. It’s conversational in the way Microsoft’s Zo and the Hugging Face app are; that is, it is able to maintain conversation. The bot says it learns from user input, and though the thread was sometimes nonsensical, somewhere in my conversation with Silly Bean (aka Prelude), I experienced the reaction virtually every product wants to provoke: delight.

In all, more than 130 actions are available today. Other bots launched since Google invited third-party developers to create their own commands for Google Assistant include a series of bots for perhaps less than expected topics. Alongside actions from Food Network and WebMD came actions series of actions for math, city services, financial services, and elder care.

Credit Card Helper action gives a lot of useful personal finance advice, but ask what is the best credit card for you and chances are the action will suggest a Chase, Wells Fargo, or Capital One credit card, an approach that makes me issue large amounts of side eye. This action is made by Berkeley Finance, which last week launched the Bank Helper action to share certificate of deposit (CD) rates.

Hawaii Surf Report is noteworthy because it is the first action of its kind on Google Assistant. This action follows a rule emerging among voice assistant services, which is that the best way to gain adoption is to become a part of a daily routine. Surfers need to know if the water is glassy, what the swell and tide conditions are, and the water conditions daily.

In recent weeks, Google Assistant continued its expansion to products not made by Google.

Last month, Google Assistant was made available for Android phones running Marshmallow and Nougat operating systems. Combined, the two OSs have an adoption rate of more than 30 percent. Google Assistant actions like the kinds mentioned above are currently only available for Google Home smart speakers, however.

In addition to new third-party actions, the Google Home app recently got a Listen tab for services like Spotify, iHeartRadio, Pandora, and Google Play Music. Makes sense: Some studies have shown that more than 40 percent of activity on smart speakers has to do with music.