Pirates could be going from Hearthstone’s dominant faction to crab food.

Blizzard showed off 11 new cards for Journey to Un’Goro, the next expansion for Blizzard’s digital card game behemoth. The set — the first of three planned for the year — comes out in mid-April. Un’Goro will add 135 new cards and start the Year of the Mammoth, which makes cards from older sets ineligible in the standard format.

In 2016, Hearthstone earned $394.6 million earned in revenue, according to research firm SuperData. Expansions give players a reason to buy new card packs, and they have a huge impact on the game. New cards bring new decks, keeping Hearthstone fresh. These 11 new cards give us an idea of what Blizzard is hoping to accomplish with the set, which looks to slow games down and de-emphasize the aggressive, fast-paced strategies that have dominated Hearthstone since the last expansion, December’s Mean Streets of Gadgetzan. 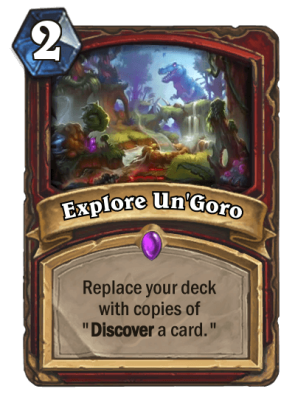 This is a warrior card that will create fun (if not competitive) decks. When you play this, it replaces the rest of your deck with 1 mana spells that lets you discover cards. Discover is the mechanic that gives you a choice of three cards, letting you add one to your hand.

This will be fun for those looking for wacky, random decks that give them a different experience each game. You could get lucky and discover great spells and minions, or you could have to constantly choose between trash.

Explore Un’Goro could be great in arena, though, since you can come across a larger variety of decks and situations in that mode. Discovering cards each turn could help you find the answers to your opponent’s actions. 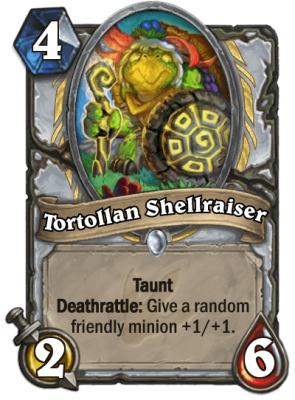 This is a new defensive option for priests. The 2/6 stat line is good for a 4 mana card, and it could protect players from a lot of early game minions. And priests can use their hero power to keep that beefy 6 health up. It also has the benefit of giving another friendly minion improved stats when it dies.

It’s also important that a priest gets good Deathrattle cards since its quest card rewards you for playing a lot of Deathrattles. 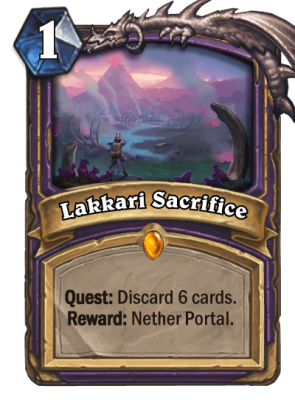 The Warlock Quest rewards players who discard a lot of cards, an effect achieved with spells like Soulfire and minions like Doomguard. Discard six cards, and you get the 5 mana Nether Portal spell. This adds a Nether Portal to your board, which summons two 3/2 imps at the end of each of your turns. Opponents cannot kill or get rid of the Nether Portal.

We already knew that quests would always appear in your opening hand, but Blizzard noted today that you can still mulligan them away. This means that players can try to draw a better card if they’re playing against a class that they don’t think the quest will work against. 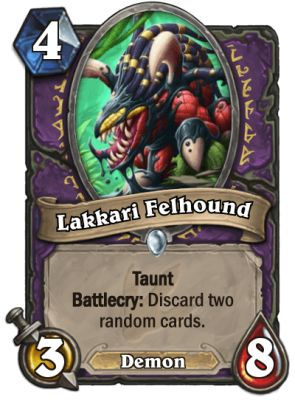 Here’s a new minion that will help warlocks with that discard quest. The 3/8 stat line with is great for Taunt at 4 mana, and it should help protect you against most early game minions. It’s also a demon, so it will work with cards that synergize with those kinds of minions. 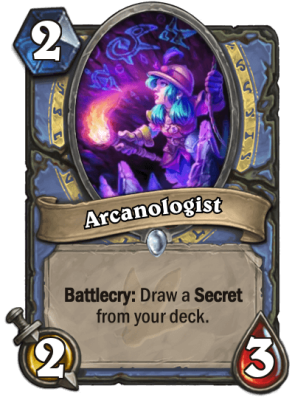 This isn’t as flashy as some of the other new cards, but a 2 mana 2/3 that draws a card is decent. And since mage secrets cost 3 mana, it can guarantee that you play on an efficient mana curve if you use this minion on turn 2.

We’ve seen Blizzard add secret-based cards to mage like Medivh’s Valet and Kabal Crystal Runner in recent expansions, but Secret Mage hasn’t taken off yet. Maybe this card could help make it viable. 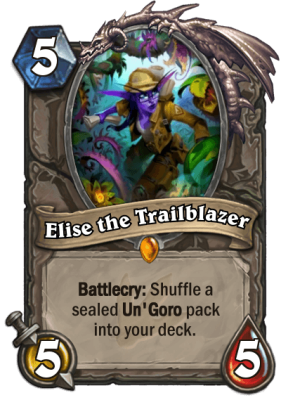 Above: Elise the Trailblazer.

Blizzard promised Elise would be back, and here she is. A 5 mana with 5/5 isn’t anything special, but she has one of Hearthstone’s coolest effects. Playing her puts a sealed Un’Goro pack spell in your deck. This is a 2 mana spell that adds five random cards from the expansion to your hand. It’s like your opening a pack of cards inside a match.

While card packs often only have one rare or better, Elise’s pack will give out at least one epic (although Blizzard said you’ll usually get a legendary). This could be a huge help for decks that struggle to draw cards in the late game. 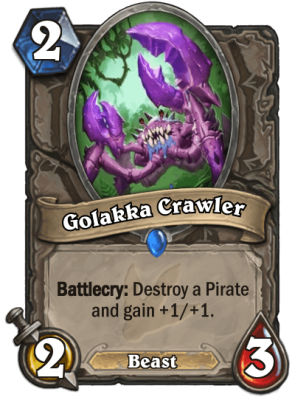 This card exists to further stop pirate decks from dominating. Of course, the card kind of has a weird catch-22. It’s only good if pirate decks are popular, but its existence alone could kill that archetype. It’s like a nuclear deterrent. It’s a card you want but hope you don’t have to use.

It’s also a beast, so it could work in decks that work with those kinds of minions, notably with druid and hunter. But hunter has had a rough go of it since Mean Streets of Gadgetzan, and Beast Druid hasn’t been a competitive deck. Those archetypes will need more help from Un’Goro if they want to flourish. 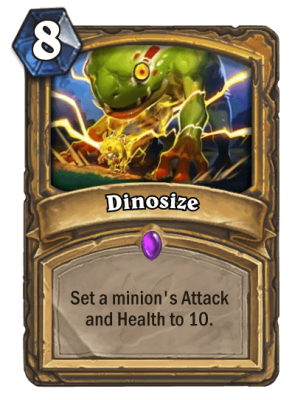 Buffing has always been a big part of the paladin archetype, and this is the biggest buff card yet. If you have a minion on the board and your opponent isn’t protected with any Taunts, this could help you deal an easy 10 damage to their face. You could even combo it with cheap charge minions like Bluegill Warrior to instantly deal 10 damage.

Oddly, this actually works against the handbuff mechanic that Blizzard tried to push for paladin in Mean Streets. Since it sets attack and health to 10 instead of increasing them by 10, cards with beefed up stats in your hand won’t get any extra benefits. 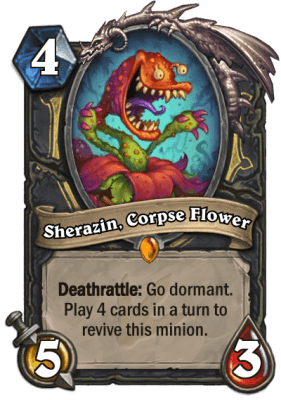 This is a tricky card. A 4 mana 5/3 minion isn’t that great, but it can revive itself on the board. The problem is that you need to play four cards in one turn to do that, which can be a tall order. You’ll need help from the Gadgetzan Auctioneer, which draws a card every time you play a spell, to consistently pull that off. This might have a place in Miracle Rogue. 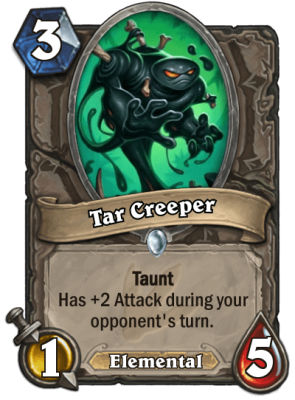 This could be the most important new card we’ve seen so far. This 3 mana Taunt minion has only 1 attack when its your turn, but that goes up to 3 when you’re defending. That will kill just about any minion your opponent plays on the first two turns of the game, and the 5 health means that it’ll likely survive more than one attack.

This is the big anti-aggro card that many were hoping for. It’s neutral, so all classes could play it. If Tar Creeper works out, it’ll become a must-include in any deck that wants to survive against fast-paced archetypes like Zoo Warlock, and Pirate Warrior. It’s also an elemental, so it could work with synergies based on those minions. 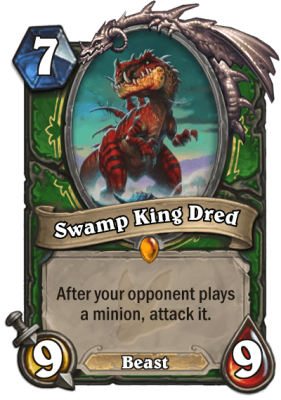 Swamp King Dred has an interesting effect. If he’s on the board and your opponent plays a minion, Dred will immediately attack it. Now, this could often be good since it could kill enemies before they have a chance to attack. But your opponent gets to decide what Dred attacks on their turn. They could play a minion with poisonous, which instantly kills any other card that attacks it.

They could even play cards with strong Deathrattle effects, ensuring that they trigger. Using Swamp King Dred against a priest could just help them complete their quest even faster.