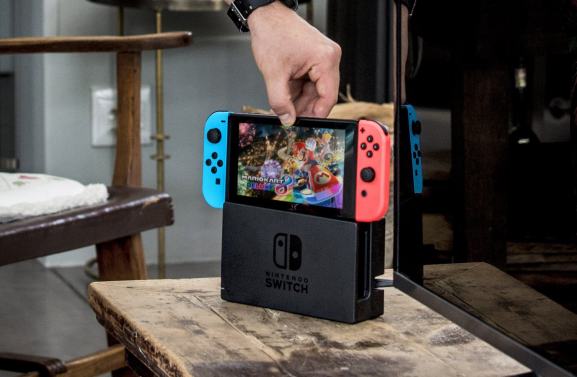 Nintendo is spending millions on marketing the Switch, it's new hybrid console.

Nintendo Switch sold faster in its first two days than the company’s last red-hot hit, the Wii, and while that is not necessarily an indicator for long-term success, the publisher is treating it that way.

The price of Nintendo shares on the Tokyo Stock Exchange jumped 425 yen, or 1.69 percent, to 25,580 yen on Friday from its Thursday close of 24,860 yen. While the Switch had a strong launch, investors are now reacting to the news that Nintendo plans to manufacture 16 million Switch systems in the fiscal year beginning April 1, which is double its previous forecast. The company confirmed that it will have at least 2 million Switch systems in the global retail channel before the end of its current fiscal year on March 31. If Nintendo ends up selling in all of those consoles, it will mean that the Switch really is on a similar trajectory to the Wii. Despite Nintendo’s confidence, that is still a big “if.”

This latest share-price jump finally puts the company’s value back above where it was before the January 13 Switch media presentation, which led to a slide in value as investors corrected their assessment of Nintendo’s worth built into the stock before getting all of the details on the console. Nintendo’s stock price saw similar spikes when it launched the popular Fire Emblem: Heroes mobile game February 2 and then when it debuted the Nintendo Switch on March 3. Each of those price surges came after market corrections, which suggests that Fire Emblem: Heroes and the Switch are continuing to meet and then exceed market expectations.

“Nintendo has seen strong demand for the Switch at launch with record-breaking sales for the company in both the U.S. and Europe,” Niko Partners analyst Daniel Ahmad told GamesBeat. “This has given Nintendo the confidence to increase production of Switch for the upcoming fiscal year. If Nintendo is able to produce and sell the amount claimed then this would be a complete turnaround from the Wii and would position the Switch as a serious competitor to PS4 and put annual sales of the console on a similar trajectory to the Wii.”

The Switch is entering a market — at least in the United States — that Sony and Microsoft have saturated with their consoles since 2013. Sales numbers of the PlayStation 4 and Xbox One have fallen even as prices for that hardware continue to drop. The hardcore-gaming market was hungry for those systems and wasted no time jumping onboard, but casual gamers are potentially still feeling priced out or ignoring the latest systems altogether in favor of gaming on smartphones.

With the Switch and critically lauded launch game The Legend of Zelda: Breath of the Wild (read our review), Nintendo is hitting the same hardcore audience that has already purchased more than 53 million PS4s worldwide and around half of that for Xbox One. Only Nintendo is hitting that audience with a system that is different enough that consumers are potentially deciding it is worth purchasing alongside their PS4s and Xbox Ones. That is different than the disastrous Wii U, its most recent console. Wii U sales barely surpassed 13 million globally since 2012, which suggests that many Nintendo could never make the case on why consumers should spend the money on that platform.

“The record breaking launch [of the Switch], the strong attach rate of Zelda, and the forecasted increase in production is exactly what investors have been looking to hear,” said Ahmad. “It suggests that Nintendo is seeing strong demand for Switch, not just from Wii U owners, and that it is confident in the software lineup for the rest of the year.”