The retail giant was granted a patent this week for a system in which drones would shuttle products between different departments inside its stores. The idea is to free customers from having to walk across its super-sized emporiums to find what they want and from having to wait while employees return from far-away storerooms.

Ultimately, Walmart believes that drones “can greatly improve the customer experience without overburdening the human associates of the facility.” Waiting, the filing said, “can contribute to reduced customer satisfaction.”

The drones would mostly avoid buzzing above customers’ heads by being routed over shelves instead of store aisles, according to the patent filing. But the filing did leave the door open to humans and flying delivery assistants crossing paths.

Although flying drones over people’s heads may not be a safety risk, steering clear of customers may “nevertheless provide an increased feeling of security for those below,” the filing said.

Of course, Walmart’s new patent is no guarantee that it will use drones. Companies file patents all the time, and not every one of them is put into use.

Fortune contacted Walmart for more information and will update this story if it responds.

As part of the drone delivery system, each store would have a computer system that would function as automated air traffic control for dispatching drones and deciding their flight paths. Sensors on the drones would help them avoid obstacles.

Several drone landing zones would be created in stores, some of which would be in plain sight of customers while others may be hidden from view.

Drones may uses nets or hooks to grab and carry items, depending on the product’s shape and weight. If needed, employees would attach items to drones after getting specific instructions through text messages or through an app. 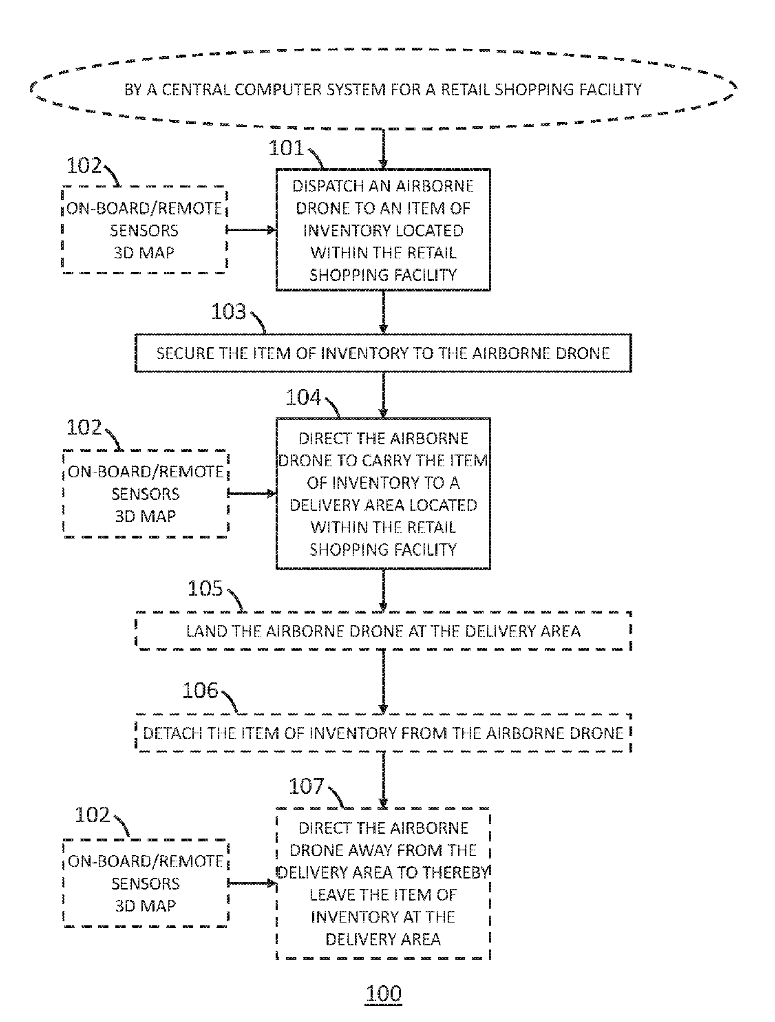 Walmart’s proposed drone delivery system is different from other high-profile drone delivery projects by the likes of Amazon, Google parent company Alphabet, and UPS. Those initiatives involve drones delivering goods to people’s homes, but drone experts generally say that such delivery systems are years away because of factors like federal regulations, limited drone battery life, and the high cost of larger drones that are capable of traveling long distances.

A recent Gartner report said that businesses could start using drones to deliver goods within their own facilities, something akin to what Walmart is proposing. Additionally, a business that operates in a large office park could use drones to distribute packages like pneumatic tube systems used years ago for inter-office mail, Gartner analyst Gerald Van Hoy told Fortune in February.