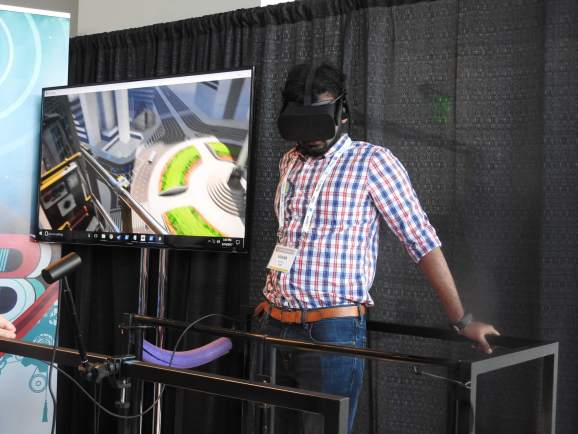 The Two Bit Circus VR app made you feel like you were on a window-washing platform on a skyscraper.

Two Bit Circus showed off a demo that conveyed just how real you could make virtual reality feel. Staged at the Experiential Technology Conference, the demo consisted of a motion platform that could shake under your feet and an Oculus Rift virtual reality headset.

The demo, created in collaboration with Applied VR, made you feel like you were going up the side of a skyscraper in a window-washing platform. You stepped on the platform and put on the headset. There was a rail behind you that you could hold onto and a gate in front of you. As I went up the side of the building, I peered over the rail, looking down on the ground. I must have gone up 40 floors.

Then, the platform stopped. The gate opened, and I stepped out into thin air. I put my shoe onto what should have been air, and it found solid ground. Then, as I was looking through the VR headset, I fell to the floor. It didn’t have quite the effect on me that I’d expected since I knew what was coming and had watched a few people go before me.

But there were other people who had funny reactions. They looked terrified. The guy in the photo at the top had a friend who shook him and scared the bejesus out of him. 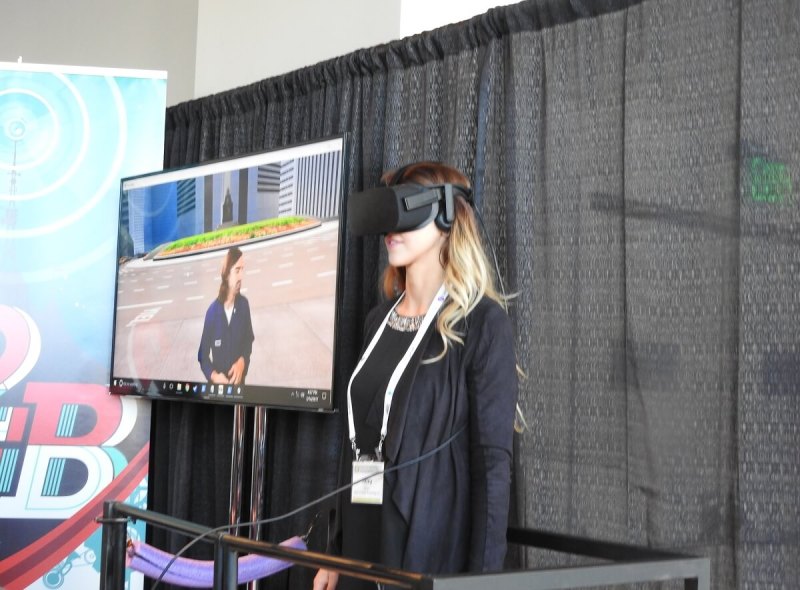 Above: Two Bit Circus demos a VR experience with a motion platform.

Brent Bushnell, CEO of Two Bit Circus in Los Angeles, said in an interview that you want to try to keep it interesting, since people have to wait in line in a public VR setting.

“So, you have to have something that is fun for other people to watch,” Bushnell said. “This one woman went through it and screamed. And then, you have 20 people entertained.”

Two Bit Circus wants to create whole arcades with these kinds of social VR experiences, just like the arcades of the 1970s and 1980s. The first location will be in Los Angeles.

Numerous other companies are doing things like creating VR roller coasters that combine with motion simulators to make you feel the experience in a visceral way.

“We’ll have a ton of experiences for our park,” Bushnell promised.

The company raised $15 million for that purpose in January from Jazz Venture Partners, a major sponsor of the Experiential Technology Conference, as well as a number of other investors, including Foundry Group, Techstars Ventures, Dentsu Ventures, Georgian Pine, and Intel Capital.