Virtual reality is in its infancy, and we’re still trying to figure out what kind of experience it can deliver for the masses at an affordable price. So, we assembled some people who are thinking about this every day, as they try to figure out the next few decades of this new medium.

I moderated a panel on “Virtual Reality Entertainment Experiences” at the close of the Experiential Technology Conference this week in San Francisco. The event, organized by Zack Lynch, was all about how digital technology and neuroscience are coming together to improve human life.

We covered a lot of ground in our panel. We started with what we’ve learned from the first generation of VR games to what lies ahead for VR startups in 2017. We covered the experience, both visual and physiological, that we feel in VR. And then, we discussed where the platform should go in the future.

Margaret Wallace: I’m the CEO of Playmatics. We’ve been around since 2009, located in Brooklyn and here in San Francisco.

Noah Falstein: I’m chief game designer at Google. If you don’t know who we are, well, you could look them up on your favorite search engine.

Shiraz Akmal: I’m CEO of Spaces. We’re a company spun out of Dreamworks Animation, focused on creating next-generation theme park attractions and theme parks that are VR-enabled. We have some fantastic investors, including Comcast and the Venture Reality Fund.

GamesBeat: I’d like to talk about what we’ve learned so far about VR, where we are now, and where it’s all going. For 2016, what would you say you learned that was different from what was predicted? What’s a piece of conventional wisdom about VR, and how might you have learned that it was wrong?

Wallace: Two quick things. At Playmatics we focus on a lot of sectors — not just games as entertainment but games around research and science and health care. One piece of conventional wisdom we faced was that, well, the lower the price point for a device or platform, the more ubiquitous it’ll be in terms of user adoption, and that’s going to open the flood gates of content. We’ve probably seen that it’s a bit more nuanced in terms of platform choice and ubiquity of adoption and also how the products have been rolled out. It’s a much more nuanced evolution than my company expected.

We also saw certain things reinforced, like my belief in the real viability of VR and AR in healthcare settings and other more specific settings, beyond just the at-home experience.

Duringer: We always think of VR as this immersive space, and VR has shown itself to be good at delivering a world that you can step into. One thing that I think we maybe thought would be better was the ability to put yourself in the world. We have all kinds of input systems. We have wands and remotes and gamepads, all these methods for interacting with the world. But they’re all fairly clunky. Nothing really lets you be in the world in a one-to-one way. You can’t just step into the world and, say, play a piano. Ultimately, you’re still pressing buttons. It’s very abstract.

What we’re seeing that you can do really well is simply communicate with other people. You still have that one-to-one presence in the form of your voice. I see a lot of potential in the next year for VR as a huge social platform. 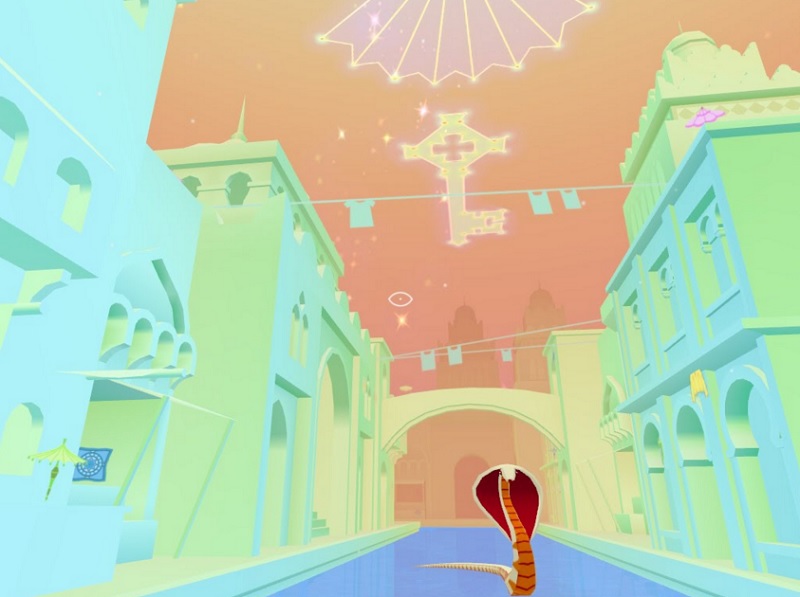 Above: Bazaar from Temple Gates Games is a VR game.

Falstein: One easy thing is that we’ve seen a lot of hunger for longer-form VR. The conventional wisdom among some people is that it’s a short-form medium, that people don’t want to be too intensely immersed in VR for too long. But as it turns out, even applications for just watching regular movies in VR have been much more popular than expected. Of course, virtually everyone with a headset also has a big-screen TV that can show those movies in high resolution, but for whatever reason, that’s been very popular.

Another thing that’s intriguing is that I think people are making assumptions about motion in VR that are unwarranted. We’re starting to find ways to move around in VR that are more natural. Just as with every other form of interface control we’ve worked with in the game industry, people will get used to something new very quickly. That’s encouraging.

Akmal: From my perspective — our company is only a year old, but as a team, we’ve been working for four or five years on VR and mixed reality with all different devices. This last year is the first year I’ve felt that it’s no longer special to be a VR company. We have a crystal-clear focus on a category of VR-type products that we’re building. This year is going to be the shakeout year. If you’re not focused on specific categories and products, whether it’s entertainment or something else, it’ll be difficult to survive and separate yourself from the pack.

It reminds me of the ‘90s, when it was cool to be a dot-com company for a little while. Sooner or later, that’s not enough. Then the question becomes, “What do you really do?”

GamesBeat: The first games have come out and everyone’s experienced them. Ubisoft said of their game Eagle Flight that when they were designing it, they were told that the experience has to be seven minutes or less. That was supposedly as long as people would have the patience to wear a headset. They found that people actually stayed in for longer than an hour. We have a different kind of knowledge now.

Falstein: CCP reported that Valkyrie was the same way. They had people playing for very long periods of time.

GamesBeat: For 2017, what’s your take on where the different parties in the ecosystem are? The investors, the brands, the platforms, and the startups.

Wallace: At Playmatics, we’re not a VR company exclusively. We’ve done some work in VR and more work in AR. I happened to be speaking with an analyst yesterday. We had a long chat about the funding landscape. His opinion reflected what Shiraz was saying: There’s going to be a slowdown in investment. There’s more supply than demand as far as investment money. I’m reminded of 2008 and the social gaming revolution, where there was a lot of overinflated companies. When they go back for their next round, it’s going to be a flat round or a down round. That’s not very attractive. Even investment money from China, which was an excellent source for some time, is drying up. People are looking toward Europe and trying to shore up those deficits.