Graeme Devine is one of the wizards of gaming, having started at age 14 in the heyday of Atari in the 1970s. He brought us CD-ROM games like The 7th Guest and The 11th Hour. He labored on early Quake games at id Software and was the games evangelist at Apple as the iPhone was taking off.

He created games on his own for a while and then joined Magic Leap, the high-flying augmented reality smartglasses company, in 2013. Devine gave a talk on his vision for “mixed reality” games about a month ago at the DICE Summit in Las Vegas. It may seem like old news, but I’ve finally had a chance to revisit the talk, which was light on news but heavy on game design philosophy.

Devine said his job is to wander around Magic Leap’s offices in Plantation, Fla., and talk with everyone about what “mixed reality,” or blending real-world images with computer animations on platforms like smartglasses, really means. He finds “mixed reality” is a more fitting name than “augmented reality.” 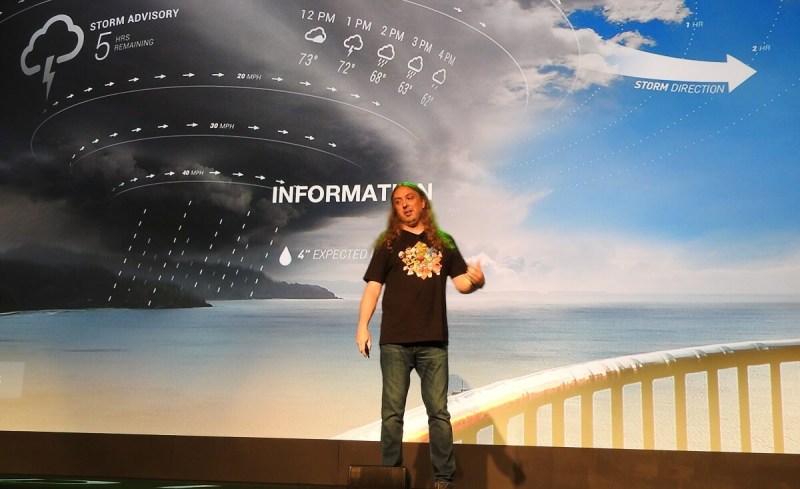 Above: Devine talks about mixed reality at the DICE Summit.

His definition: “Mixed reality is the mixture of the real world and virtual worlds so that one understands the other. This creates experiences that cannot possibly happen anywhere else.” If we start creating experiences that do that, we’re on to something cool, he said.

“What does mixed reality mean in two years, or what does it mean in five years or 10 years,” Devine said.

It’s not so silly to talk about that time frame because of Devine’s own experience with the iPhone. Ten years ago, it was just getting started, and now, it’s generating $32 billion in sales a quarter.

Above: Devine shows old AR in a talk.

Two years ago, the impression of AR was the image of the robots on the smartphone above. Magic Leap’s ambition is much different, as it hopes to insert digital content directly into your surroundings where it can interact with you and your world. Mixed reality comprehends your surroundings and interacts with things in your home — like on the sofa or behind the sofa.

This kind of game is far different from the 3D games we play on our consoles where we are looking through a piece of glass into a 3D world. Nintendo’s Super Mario 64 accomplished the shift from 2D to 3D gameplay in 1996, but Devine said games had unfortunately not moved on since that accomplishment. 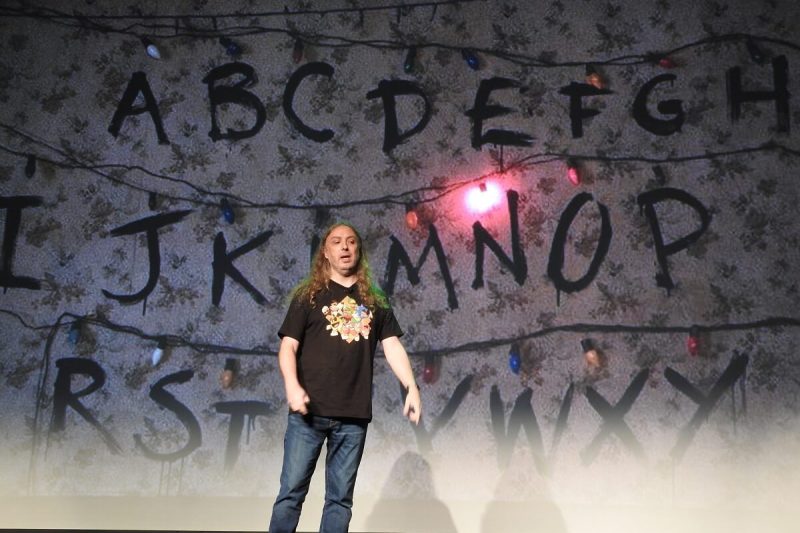 Above: Devine at the DICE Summit.

“The worlds are much more beautiful. The graphics are more stunning, but the world is still on the other side of the glass where I play Master Chief, Lara Croft,” he said. “The challenge of mixed reality is to move on again, and it’s really challenging because now, the games happen on our side of the piece of glass, in our homes.”

Devine described a concept for a game at Magic Leap called “Ghost Girl.” In this game, you start with wooden cubes that are real. You learn more about using those real world objects and having them interact with mixed reality. You hear noises in your house. They get louder, and you go and look.

“And there, in your room, is a ghost standing in front of you,” he said. “She looks directly at you. She knows where your eyes are. She points directly at you. She points past you and behind you. And there behind you is the outline of a dead body — in your house. You turn back to look at Alice, and she’s gone. And now, you hear, ‘Will you help me?'” 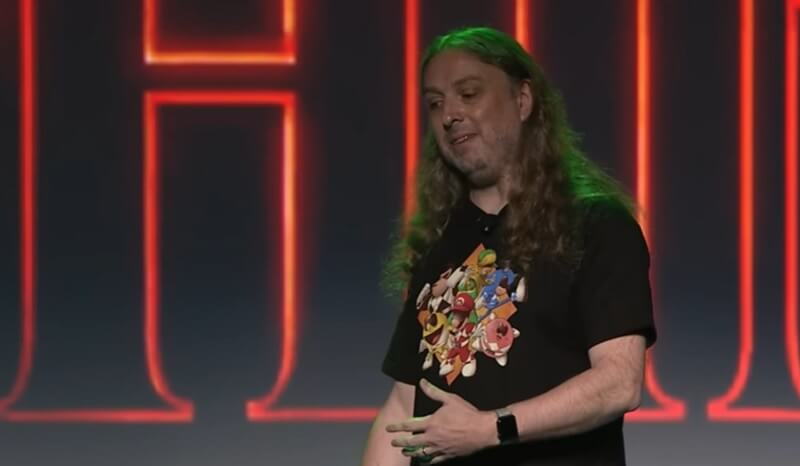 Above: Devine mentions “Stranger Things” in his DICE talk.

Then, you go back and start using the wooden cubes to communicate with the ghost. You go on adventures together, like playing card tricks with real cards.

You might be sitting on your couch watching the Netflix show “Stranger Things,” and there is Alice sitting on the couch next to you, Devine said. This is something that could only happen in mixed reality, Devine said.

As for communication, Devine said the challenge is the “five-mile rule.” If you’re five miles from your home and you’ve forgotten something, will you go back and pick it up? With a smartphone, you will do that. With an Apple Watch, you won’t. To be successful, mixed reality devices have to achieve that too.

“We need to be talking about the five-mile applications for mixed reality right now,” Devine said. 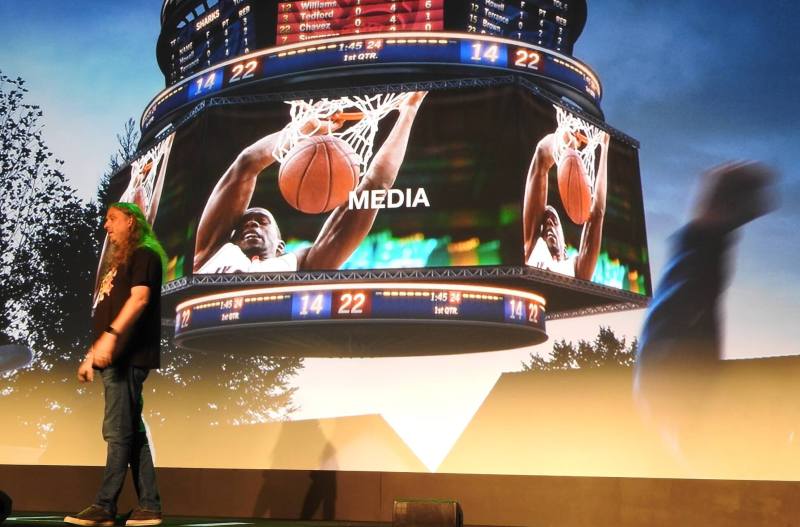 Above: Devine at the DICE Summit.

Devine said he believes Pokémon Go is a great AR app, but the cooler version was in the ads where it showed Pokémon creatures in the world.

He said that mixed reality has to be a separate platform, as separate as television is from radio. It can’t be an add-on to a smartphone or a console.

“As developers, we have to treat it differently,” he said. “It can’t depend on already existing infrastructure. We have to create a compelling platform that people will line up for four days at Best Buy.”

He added, “The challenge … for the game industry is that we are the only ones that can do this.” Software has been on a 2D screen to date. With mixed reality, you are walking through the world. Those applications in mixed reality have to be aware of what you are doing. Games are the only things that are designed to interact with you constantly, Devine said.