Electronic Arts is releasing Mass Effect: Andromeda on Tuesday for Xbox One, PlayStation 4, and PC, and it’s the latest installment in BioWare’s epic science fiction series. And as you might expect, you encounter some epic boss fights in the game.

One of the early ones takes place on the planet Eos, which is one of the possible “golden worlds” that humanity is seeking as it explores the new Andromeda galaxy in search of a new home world. The Eos fight isn’t particularly difficult on normal setting, but it shows a lot about the combat in Andromeda.

The drama of the fight was set up well. My artificial intelligence aide, Sam, calmly warned us (too late) that the previous person who opened the same gate that we did had one message: Run. We were faced not only with a giant creature, but an assault by a force of Kett soldiers, the main enemy in Andromeda. So we got in a firefight with a gigantic, baboon-like beast along with lots of enemy soldiers. The trouble was, if you paid to much attention to one of them, the other would get you.

Playing as Sarah Ryder, I was armed with one of the fairly weak assault rifles, as were my two squad mates in the single-player mode. But the boss creature wasn’t so nimble, and I was able to escape it by jumping. 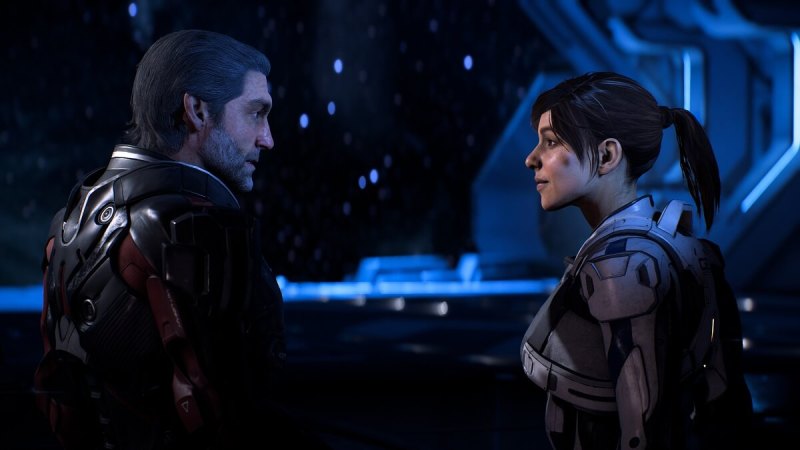 The story setup was good, the music was dramatic, and the battle chatter was realistic. But the gameplay of the shooting was still pretty subpar as far as third-person shooters go. Mass Effect: Andromeda has some of the same problems that the other titles in the series have, as movement, controls, shooting, and close combat aren’t as good as you find in other shooters.

In the video below, you’ll notice some odd behavior by the enemy AI in the battle. One of the Kett soldiers runs clear around the battle, sprinting so fast I can’t even get a bead on him. But then he runs right by the stairs and around toward the back. So he basically runs out of the battle, rather than trying to flank my team of three soldiers. That was some pretty weak-minded AI.

The big boss creature wasn’t as dumb. But it wasn’t smart either. It kept turning to whatever direction it was being shot from. And we had it in a crossfire, so it kept turning around and around. Once again, that wasn’t too bright. But the creature had a big disadvantage, as we were on a base platform where the creature just couldn’t maneuver. That meant it was easy to trap the creature and then jump off the platform when I needed to escape. Then I would jump on the platform and then start shooting it again. I would basically chalk that up to poor level design, as we really should have had a better battleground.

But the battle wasn’t easy. I spent so much time shooting the big creature without being hurt in response. I got overconfident, and when the Kett soldiers came after me, I didn’t take cover. So they took me down in health and then got me with a grenade. I had to re-fight the boss fight a couple of times.

As boss battles go, it wasn’t a great one. But it was one of my more exciting moments so far in the massive Mass Effect: Andromeda open world. I’m still making my way through Andromeda. I’m enjoying myself so far, but I’m hoping the pace picks up with the main story.