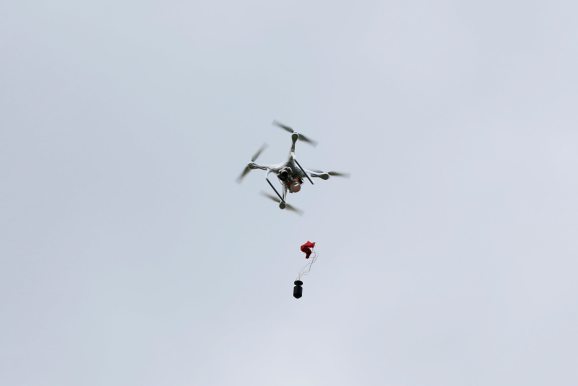 A simulated explosive from a modified commercially available drone falls toward its target during a demonstration of the Airspace Systems Interceptor autonomous aerial drone in Castro Valley, California March 6, 2017.

(Reuters) – The enemy drone whined in the distance. The Interceptor, a drone-hunting machine from Silicon Valley startup Airspace Systems, slinked off its launch pad and dashed away in hot pursuit.

The hunter twisted through the air to avoid trees, homed in on its target, fired a Kevlar net to capture it, and then carried the rogue drone back to its base like a bald eagle with a kill.

Airspace is among some 70 companies working on counter-drone systems as small consumer and commercial drones proliferate. But unlike others, it aims to catch drones instead of disabling them or shooting them down.

A demonstration at Airspace headquarters in San Leandro, California, showed a compact aircraft just a few feet wide, yet capable of sophisticated, autonomous navigation and accurate targeting of a drone in motion.

It is still early days in the drone-defense business. Security professionals both public and private worry about dangerous drones at military sites, airports, data centers, and public venues like baseball stadiums. But counter-measures carry risk, too.

For example, the U.S. Air Force recently tested experimental shotgun shells for shooting down drones. But if the drone carries a payload like a bomb or chemical weapon, it could still fall on its target.

Jamming the radio signals to the drone does not always work, either. Drones differ from “remote-controlled” aircraft because they can fly to pre-set coordinates autonomously. The fastest drones can reach 150 miles per hour (240 km), too quick for human pilots flying another drone to catch.

The technical challenge of safely stopping a dangerous drone appealed to Guy Bar-Nahum, one of the inventors of the Apple iPod and the engineering brains behind Airspace Systems.

“We are creating a very primitive brain of an insect, a dragonfly,” Bar-Nahum said. “It wakes up, sees the world and doesn’t really know where it is. But it has goals to capture the other drone, and it’s planning a path in the world and knows how to move through the world.”

The Interceptor must pack computing power and sophisticated software into that tiny drone brain. Unlike the emerging driverless car, it has to understand its environment without the benefit of an internet connection to a massive mapping database.

“My background is in physics, and it’s all about modeling the world” with math, Bar-Nahum said. “What we do in this lowly startup that looks to be a normal, military ‘take ‘em down’ kind of company is build machines that can model the world.”

The business model is challenging too. Currently, only law enforcement officials have the authority to interfere with another drone’s flight. Regulations also require a certified pilot to stand ready to intervene in any commercial drone flight and keep a line-of-sight view of the aircraft.

Thus Airspace Systems will not be selling its aircraft, but rather leasing a system, complete with operators and a mobile command center, to customers.

The New York Mets have an interest in using the system to protect Citi Field in New York City, according to Sterling VC, the venture capital arm of Sterling Equities, which owns the stadium and also invested in Airspace.

The danger from hostile drones became more clear in the last few months when the U.S. military said Islamic State fighters were using them to attack Iraqi troops in the battle over Mosul. The military news site Defense One reported ISIS was using an array of consumer-style drones, including an agile quadcopter version for dropping explosives.

San Francisco-based Dedrone, for example, has raised $28 million in venture capital and is focused on detecting drone incursions. It now has about 200 customers, according to CEO and co-founder Joerg Lamprecht. Some are car companies looking to protect new designs from the automotive press and others are data center owners looking to keep drones from damaging critical rooftop cooling systems.

“Most of the market is going to be detection, something like a burglar alarm,” Lamprecht said.

DroneShield, an Australian company, also makes a detection system and has developed a prototype electronic jamming gun to ground a drone.

Airspace, backed by $5 million from Shasta Ventures and Sterling VC, hopes to bring its drone-capture system to market as early as this summer.

But Airspace’s approach has limitations. Chief among them: the Interceptor catches one drone at a time. To defend against multiple drones, Airspace must launch multiple machines.

“The swarm of drones is going to be the threat,” said Blades.

Beyond that, catching drones incurs expense and complication when simpler measures might do. Dedrone’s Lamprecht gives an example from a German customer that makes cars.

At its test track, the customer wanted to protect new car designs from drones’ prying eyes. When Dedrone detects an intrusion, the car’s driver hits a dashboard button to fire a fog bomb to obscure the car.

But James Bond-style diversions, or even forcing a drone down, may prove insufficient if a craft is hovering above a crowd with something dangerous, like an explosive or poison. In such a situation, capturing and carrying away the enemy drone may be the best option, even if it is complex and expensive.

For Airspace, perfecting a drone-hunting machine than can see – and chase – on its own is not as crazy as it may seem.

“This is an old ambition. You can read about it in Jules Verne or Aldous Huxley,” said Bar-Nahum. “That’s why autonomous movement is the next decade for me.”