Samsung has introduced the latest generation of its Galaxy Tab device, evolving it to now include the bells and whistles you’d get from the company’s Galaxy smartphone lineup. The 9.7-inch Tab S3 is built around both productivity and entertainment, akin to the Android version of the iPad Pro. But with a price tag of nearly $600, is this flagship tablet really worth it?

Compared to its predecessor, the Galaxy Tab S3 contains a better camera, improved processor, support for a detachable keyboard and S Pen stylus, and more. You could think of the device as a tablet version of the Galaxy Note7, minus the exploding battery. While the $600 price tag could catch people off guard, it’s still a premium device that doesn’t disappoint — if you’re looking for an Android version of the iPad Pro, the Galaxy Tab S3 is worth considering. 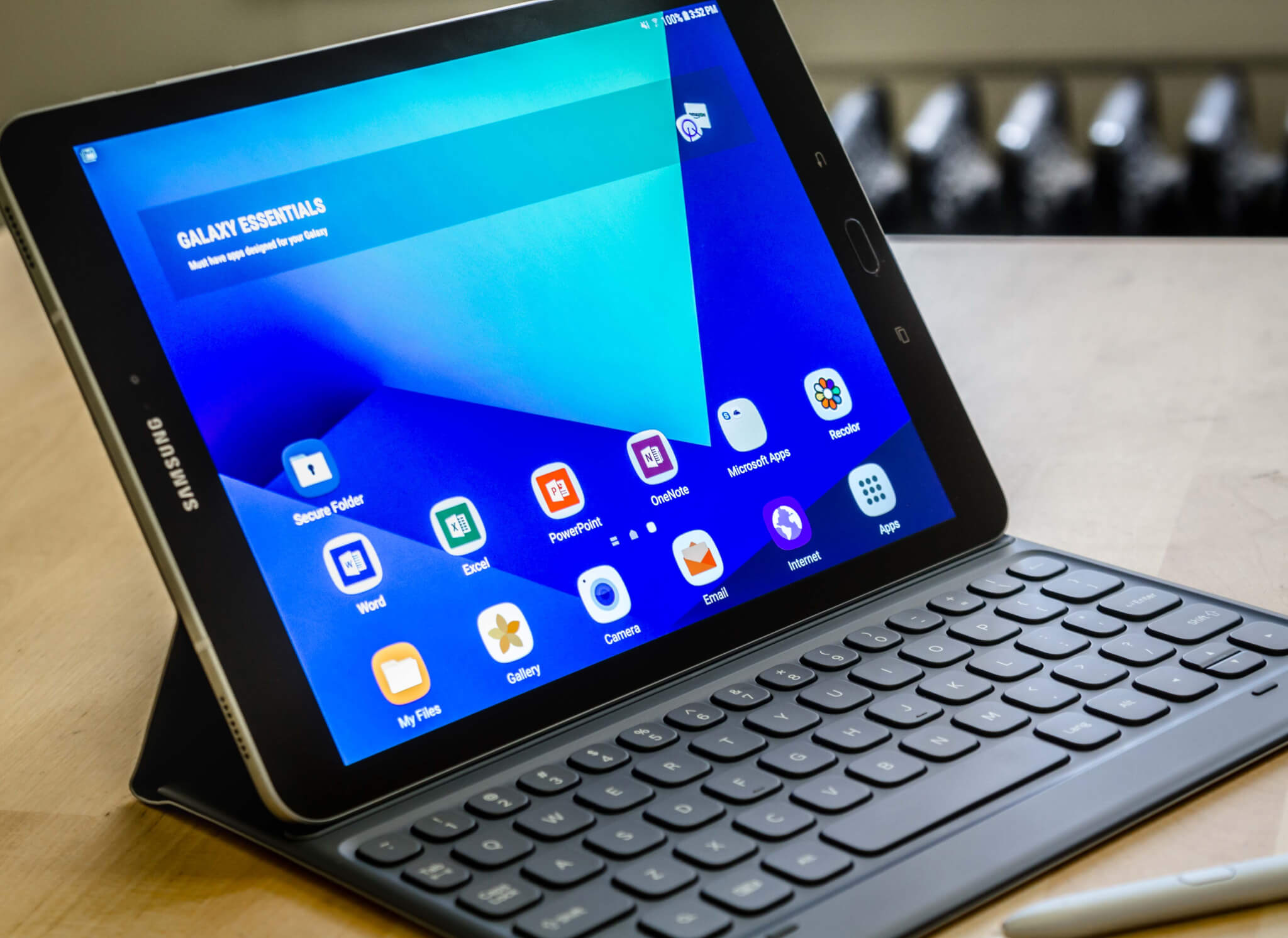 Mostly a larger version of the Note7

If you were one of the people who got to use the Note7 before its recall, the Tab S3 will feel similar in many ways. It’s a productivity device, similar to the 2017 Samsung Chromebook Pixel, so if you’re interested in taking care of emails, writing documents, or communicating with the home office while on the go, the Tab S3 is a good piece of technology to have.

At first glance, you might think the differences between the Tab S2 and S3 are minimal, but there are some key differentiators. The S3 is only available in one size, comes with a glass backing and metal frame design instead of a plastic feel, and is heavier, at 15.1 ounces for Wi-Fi and 15.3 ounces for LTE versions. It’s also thicker, at 6mm. The S3 also features a larger battery (6,000 mAh) with fast charging, versus the 5,870 mAh battery in the S2.

The new tablet features a super AMOLED display with 2048×1536 resolution, which really makes the colors and pixels in images and videos pop on the screen. While the quality is exceptional, I often found myself needing to wipe down the screen since it was prone to fingerprints and smudges. As for performance, Samsung equipped the S3 with a Qualcomm Snapdragon 820 chipset ,which is the same processor found in the Galaxy S7 and S7 edge phones.

With 32GB of storage and an expandable microSD port of up to 256GB, the Tab S3 has sufficient storage to last through any trip or meeting. And if that’s not enough, you can always store files in the cloud. The device has 4GB of RAM, which is suitable for most activities, from web browsing to gaming, designing, and more. By no means is this tablet going to contain the power needed to replace a desktop computer, however.

While it comes installed with Android 7.0 Nougat, the Tab S3 also comes with a suite of Microsoft Office apps pre-installed, including Word, Excel, PowerPoint, OneNote, OneDrive, and Skype. 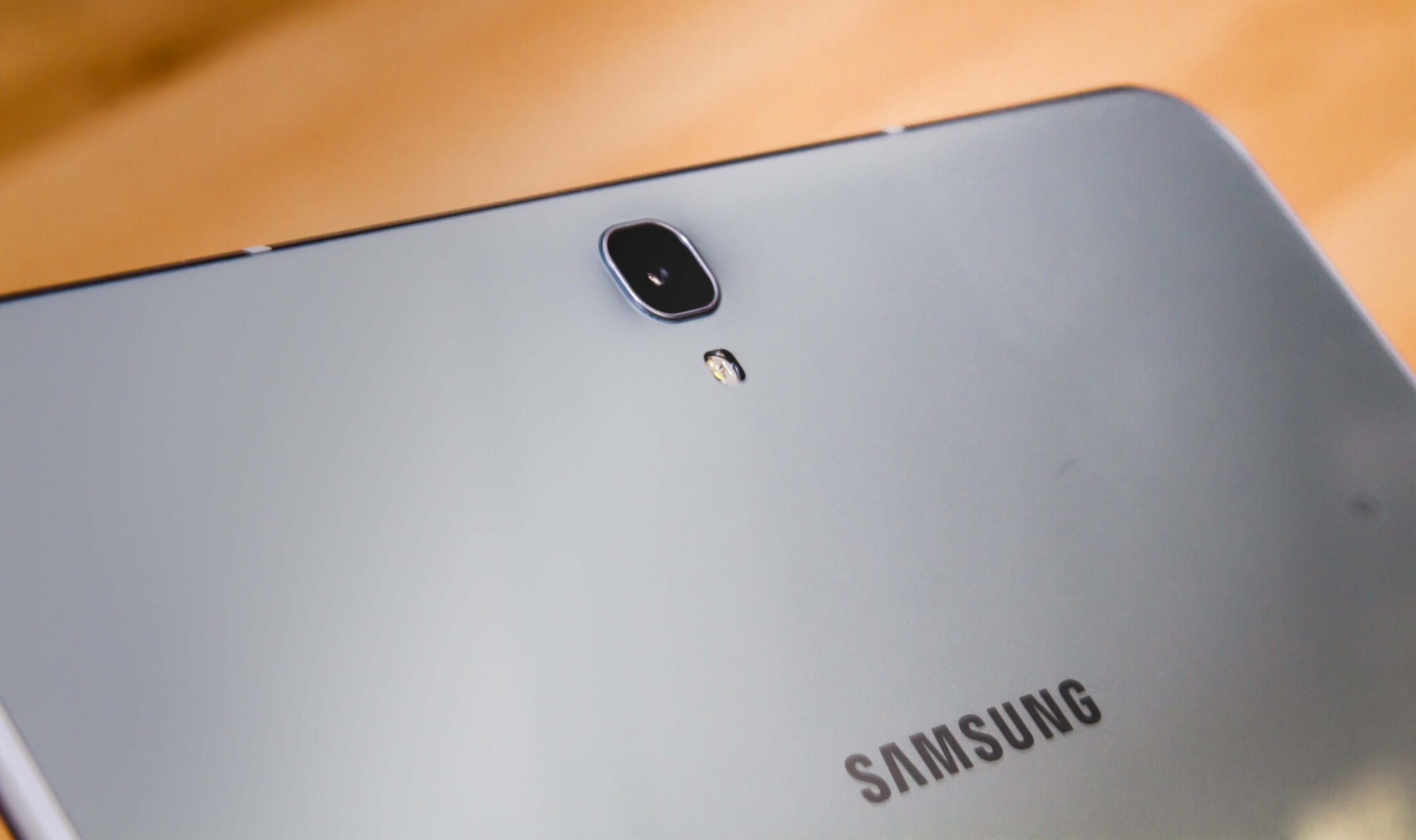 Above: The rear-facing camera on the Samsung Galaxy Tab S3.

The camera has also been upgraded with a 13-megapixel lens on the rear and a 5-megapixel camera on the front. Compared to the Tab S2, the new tablet provides higher quality images and video in the front, so video conference calls should be sharper than before.

Samsung has taken pains to ensure the tablet is suited to entertainment as well as productivity. The company boasts that the Tab S3 comes with quad speakers that have been tuned by AKG by Harman. The audio has been calibrated to adjust the sound based on how you’re holding the tablet: whether portrait, landscape, or flat. This sounds promising, but, to me, it didn’t seem to be that immersive of an experience. If you’re holding the tablet in portrait mode, the four speakers are at the top and bottom. As I listened to my Spotify playlist, the audio was great, but there were times when you could sense a dead spot along the sides of the tablet. Even so, the audio quality was still pretty good. 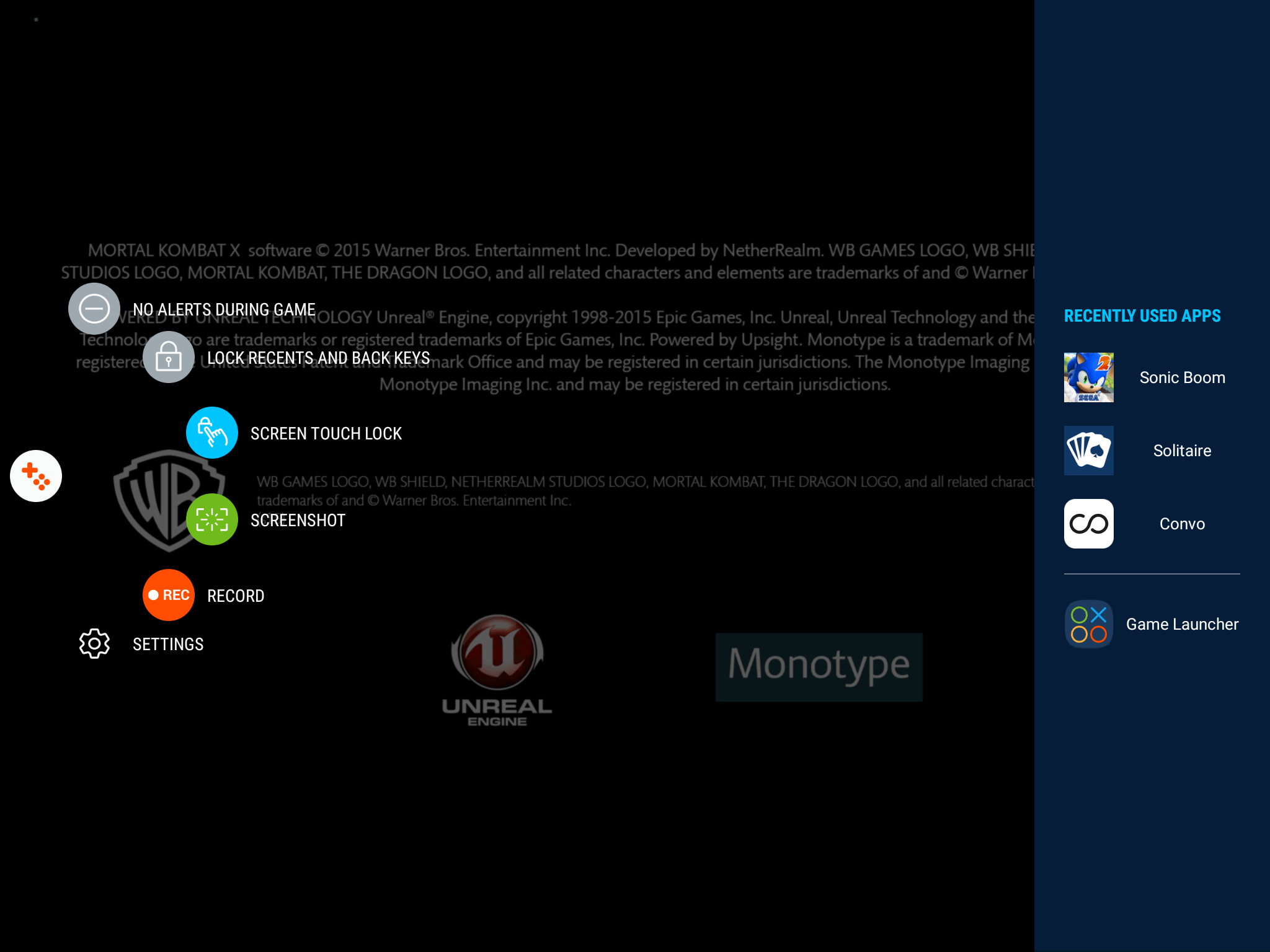 Above: Game launcher is supported on the Samsung Galaxy Tab S3.

The Galaxy Tab S3 supports the Vulkan Games API as well as the game launcher that first appeared in the Galaxy S7 and S7 edge devices. As soon as you download multiple games, they’ll be collected into a specific folder. During gameplay, you’ll be able to elect power saving mode, disable alerts and notifications, take screenshots, and even record the action so you can share it later on Twitch, Facebook, or YouTube.

You won’t have to go into the games folder to activate the game launcher. It’s automatically enabled when you start playing any game — look for the floating red button that expands into a larger menu when tapped. 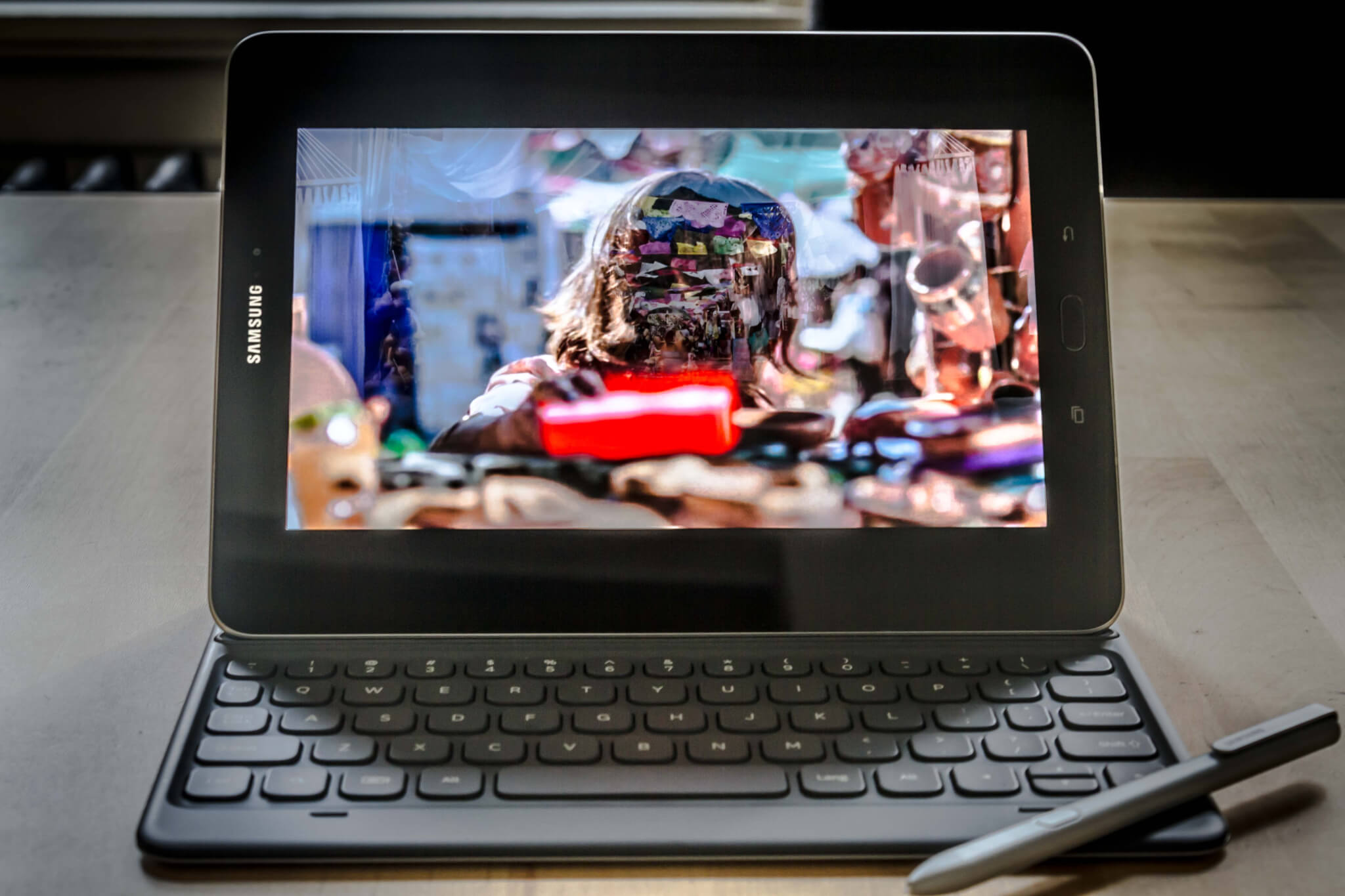 Above: Watching videos on the Samsung Galaxy Tab S3.

And since you might be using the Tab S3 for work, you may want to store some files and apps securely. That’s why the device comes with Secure Folders, a feature that was introduced with the Note7. Using the app, you can store files, images, documents, and even other apps into a tool that only you’ll be able to access. You could store the documents in the cloud, of course, but there are instances when you might not want to. This is the likely the first time Samsung has extended this tool beyond the Note7.

What is missing from the Tab S3 is the iris recognition that provides added security. The device does have a fingerprint sensor and a PIN code you can use. If iris scanning was included, it would cement the perception that the tablet is a super-sized version of the Note7. 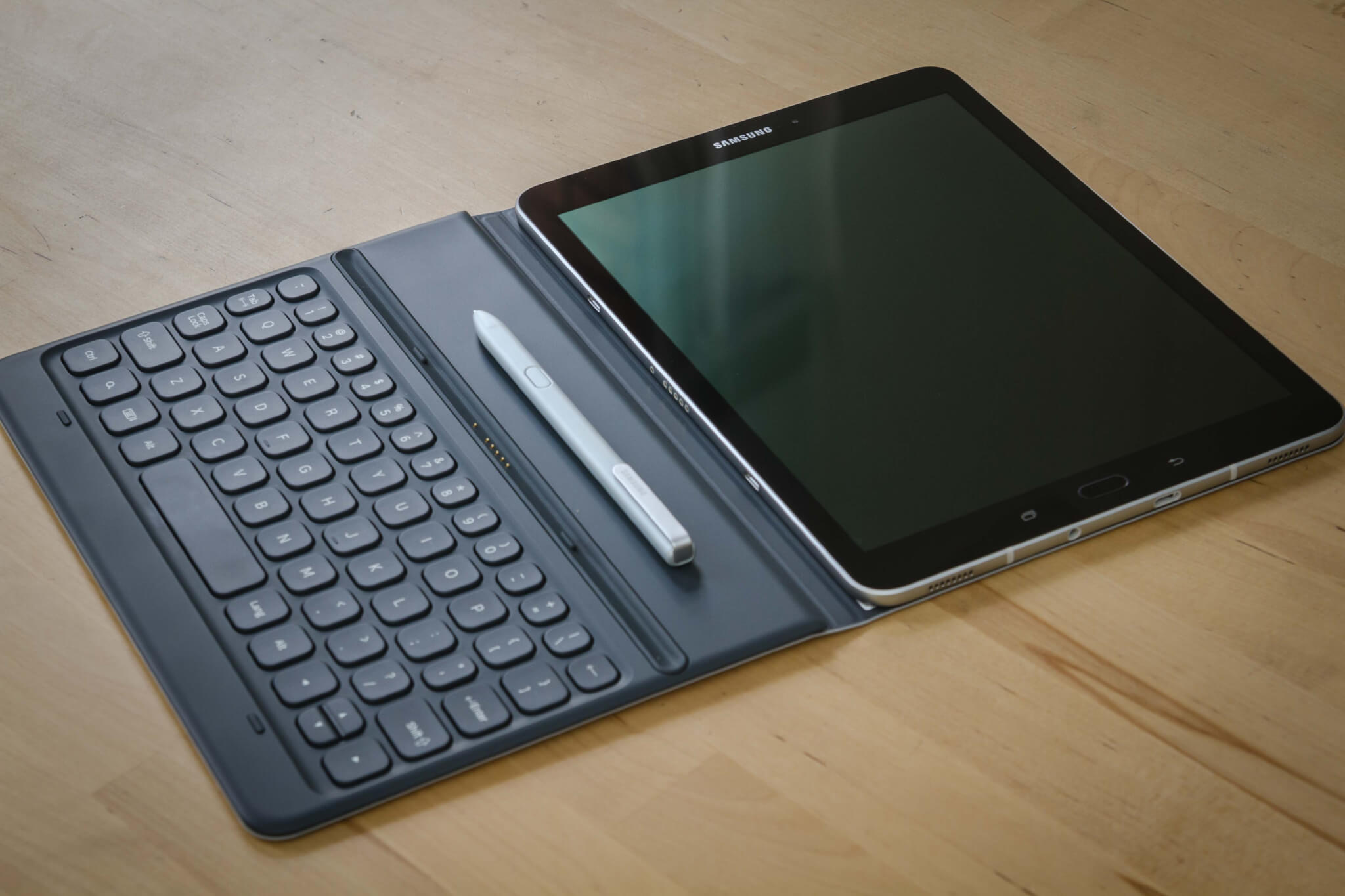 Above: Samsung Galaxy Tab S3 in a pogo keyboard case and S Pen.

The Galaxy Tab S3 supports a Pogo keyboard and S Pen. Samsung doesn’t include these two accessories with purchase, but we received them to review. The keyboard (retail price of $130) was previously used on the TabPro S device that launched in 2016. It was comfortable but took a bit of getting used to due to having different key configurations than on a traditional QWERTY keyboard. It also functions as a decent case for your tablet, complete with a magnetic backing that sticks to the S3’s frame. An issue I’ve encountered is how dirty the exterior of the case becomes. 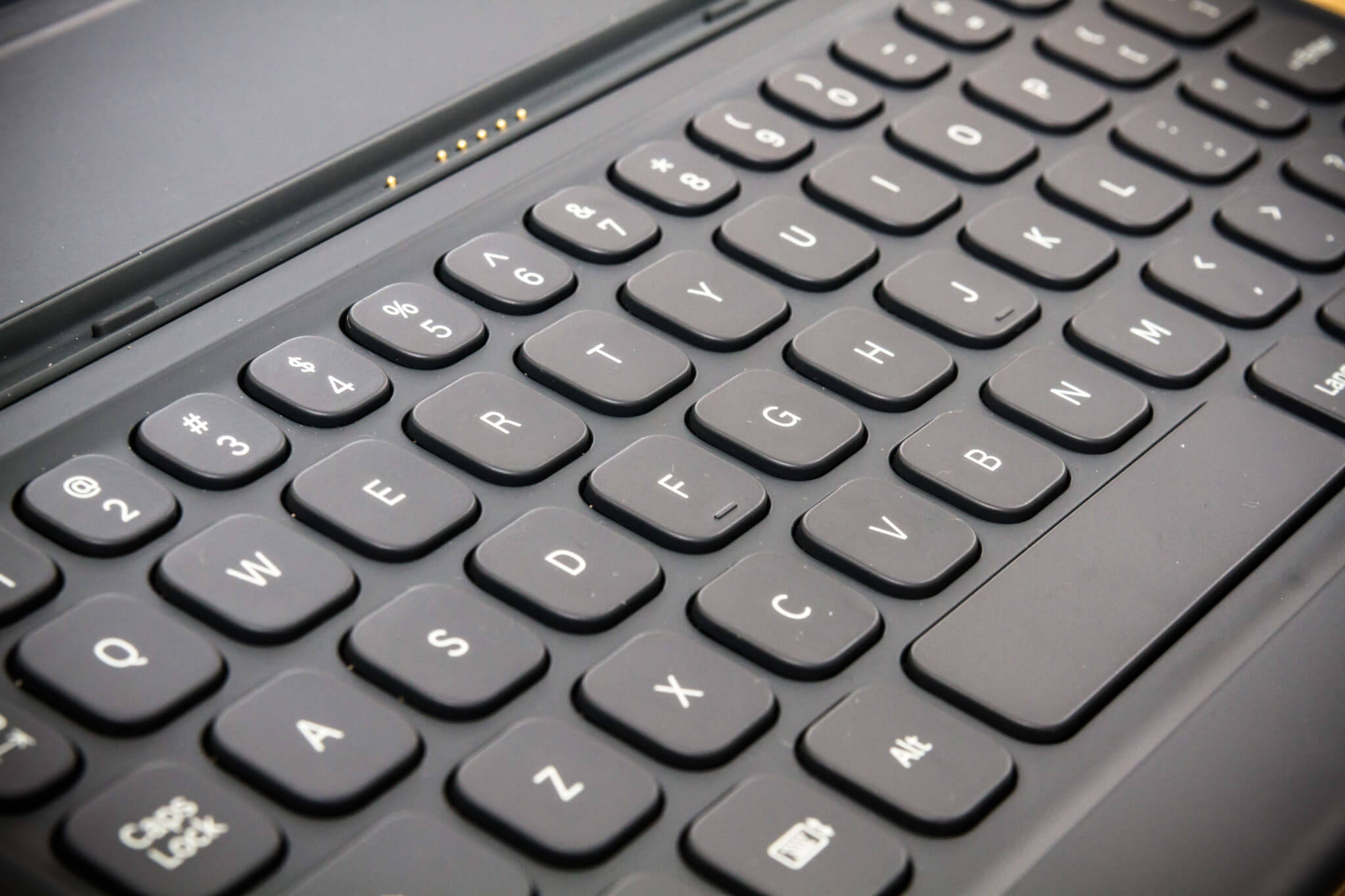 Above: Pogo keyboard accessory for the Samsung Galaxy Tab S3.

Another issue that arose when using the keyboard has less to do with the hardware and more with the apps. With the tablet, you’re going to use apps in landscape mode. And while this isn’t a deal breaker, it highlights the fact that some apps need to work on their user experience when the screen isn’t in portrait mode 24/7.

Above: The S Pen for the Samsung Galaxy Tab S3.

The S Pen is bigger than the one that comes with the Note7 and Chromebook Pro, but it has the same functionality. The tablet contains a sensor that detects the pen’s proximity. When it’s nearby, you can use it to create or view notes, select parts or write on the screen, translate text, and more.

A downside of the S Pen is that there’s no place to store it when it’s not in use, which means when you travel with it, there’s a possibility you could misplace it or outright lose it. It does come with a clip so you can attach it to other things, which is good, I suppose. Should you misplace your pen, Samsung does carry a replacement, but the company hasn’t revealed the pricing yet. 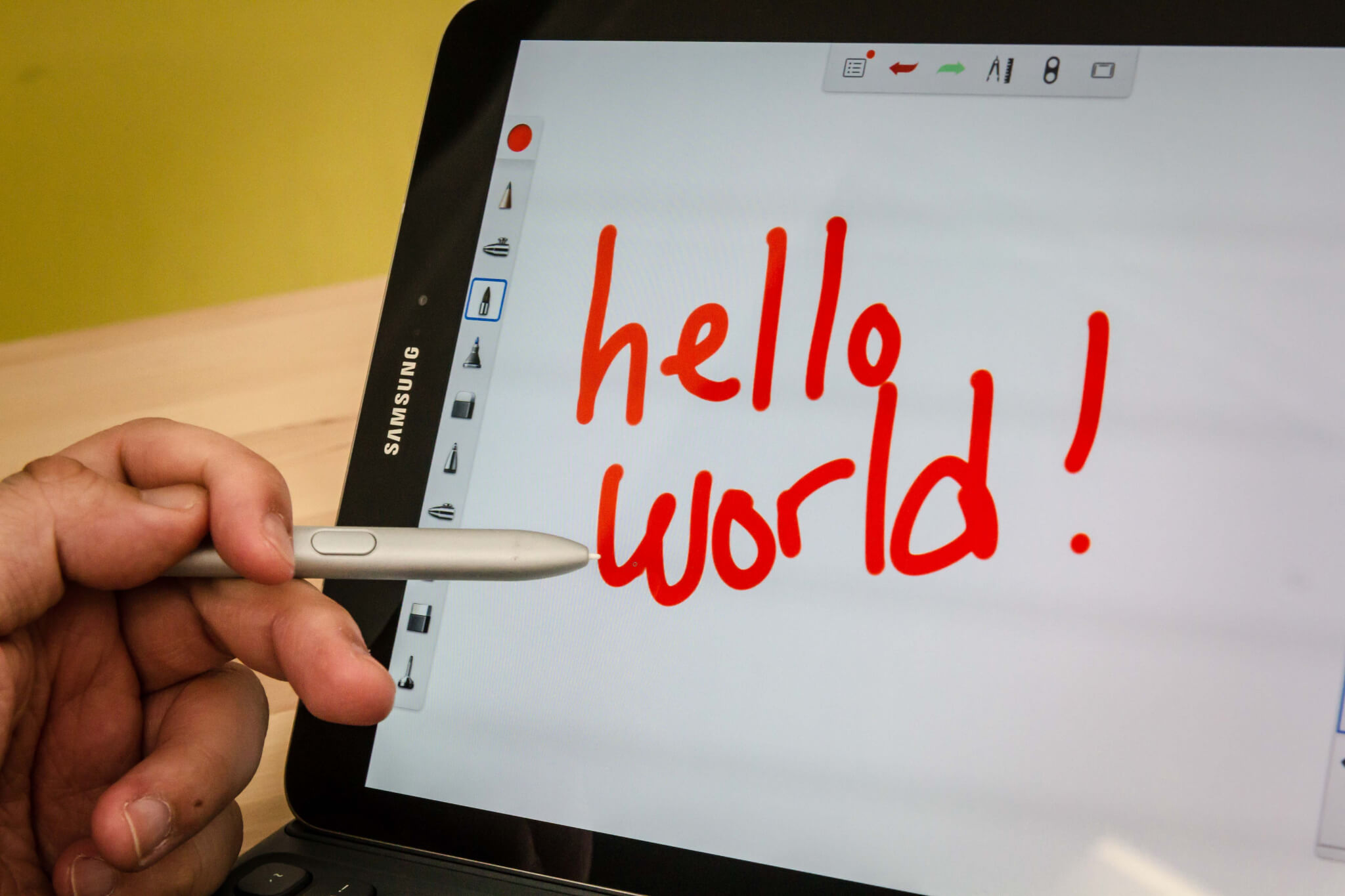 Above: Using the S Pen on the Samsung Galaxy Tab S3

With a 0.7mm tip, the S Pen supports tilt functionality and palm rejection, meaning that the Tab S3 isn’t just for business people but should also appeal to also artists and creative types. You won’t have to worry about smudging your work by resting your palms or fist on the screen while simultaneously using your pen.

The Samsung Galaxy Tab S3 is a useful tablet that is worth carrying around while on the go. If you had its predecessor, the Tab S2, you might encounter some sticker shock when considering an upgrade — the S3 is $600, while the S2 was $400. However, if you think of the S3 as a competitor to the Surface Book 4 and the iPad Pro, the price is pretty comparable, and it’s an Android device. 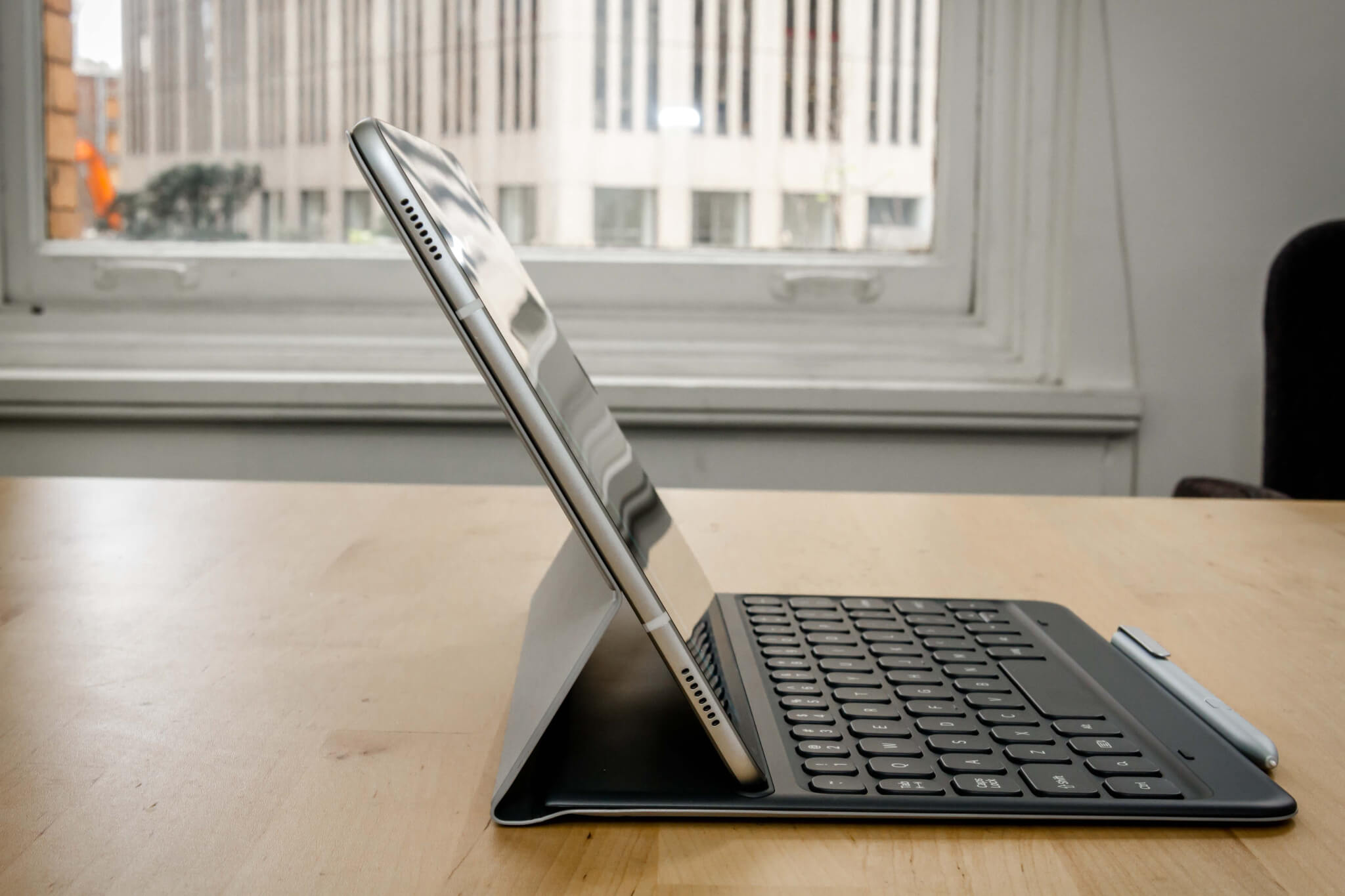 If your life lives in the cloud, you want to shed a laptop, and you love Android, the Tab S3 will likely be a device of choice. The keyboard isn’t necessarily a must-have accessory, but the S Pen is perhaps the one thing you should get alongside the tablet.

There’s very little I found disappointing about this tablet, and I think I’d buy one if I wanted to get something with the performance and resources to watch videos, navigate the internet, process photos, use apps, play games, and answer emails. It won’t fully replace a laptop yet, but it’s worth looking at…well, until I see the Samsung Galaxy Book.

Samsung is already accepting preorders, and the Galaxy Tab S3 will be in stores on March 24.