Bethesda’s next major release is a science-fiction thriller, and the publisher is using film to reach an appreciative audience.

The Alamo Drafthouse chain of movie theaters is kicking off a Bethesda Softworks Presents film series dedicated to the upcoming Prey reboot from developer Arkane Studios. Prey, which debuts May 5 for PlayStation 4, Xbox One, and PC, tells the story of Morgan, a lone human left on a space station called Talos I. As the subject of experiments, your character awakens to find that they (you can play as a man or a woman) must fight off an alien threat while uncovering what happened while they were asleep. In Prey, you’ll find a lot of familiar sci-fi themes, but Bethesda and Arkane are embracing that — and that’s why it is partnering with Alamo Drafthouse.

Films in the Bethesda Softworks Presents series includes Moon, Starship Troopers, and The Matrix. The Drafthouse will play these films at its locations around the country throughout next month.

“To celebrate the upcoming release of Prey, we’ve partnered up with Bethesda to present a special series of films that serve as inspirations for the highly anticipated sci-fi action game,” reads the Drafthouse website. “Join us through the month of April and get immersed in the world of Prey as we countdown to the worldwide release on May 5.” 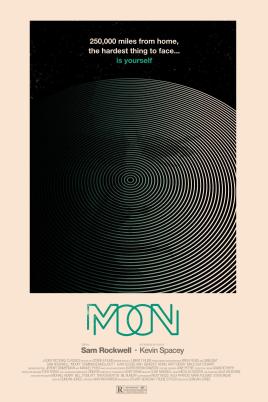 Above: A poster for Moon by artist Olly Moss.

Moon is one of the first feature films from Warcraft director Duncan Jones. The 2009 movie tells the story of the sole lunar-based employee of a conglomerate that is mining the moon and how things start going wrong for him when he discovers his life isn’t what he thought it was.

Starship Troopers is a schlocky-but-lovable 1997 action flick about humans taking on an alien race of insects in interstellar warfare.

And The Matrix is the landmark 1999 action blockbuster that tells the story of a human race enslaved by machines in a cyber-reality that we can’t tell isn’t real.

Bethesda and Alamo chose these films to set the table for Prey, which is the latest game from the Dishonored and Dishonored 2 developer. This also isn’t the first Prey. A game with the same name from Bethesda and developer Human Head Studios launched in 2006 Xbox 360 and PC. Arkane is reimagining that franchise in the reboot/sequel that is coming nearly 11 years later.