Google has added a new section to the Google Play store to promote a free app every week. If you can’t see it in your Play store (I certainly don’t get it on my phone), you can access it directly, both on desktop and on mobile, by clicking the following link: Free App of the Week.

Android Police first spotted the new collection of apps and games by scrolling down on the Apps page of the Play store. As its name suggests, the section is supposed to highlight one item per week, with the sale presumably ending after seven days. It’s not clear how the featured selection is made nor what happens after the week is over, but the app likely returns to its original pricing. 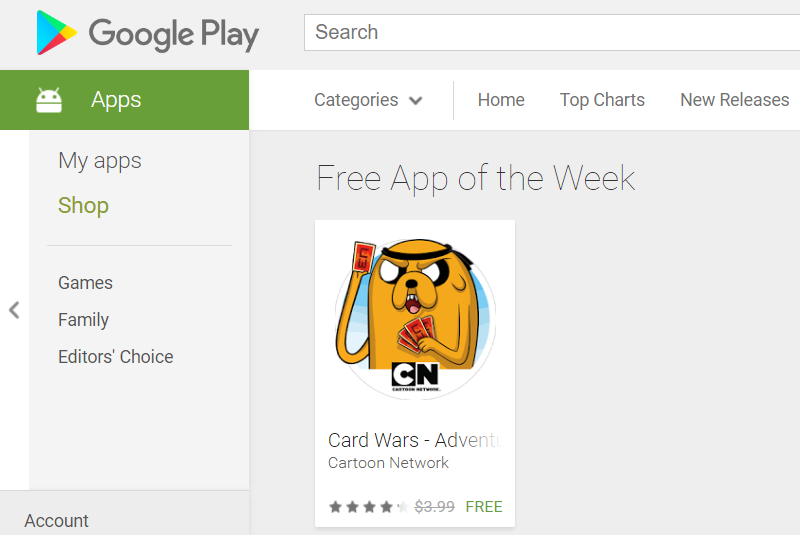 As outlined, the Google Play collection should only ever show one item at any given point. This week it’s Card Wars – Adventure Time (which normally costs $3), while last week it was Ultimate Guitar Tabs & Chords (price is $3 again).

This is a great way to promote apps and games without overloading the user. I don’t bother going through the top charts, nor do I have time to check Google Play’s Editors’ Choice section on a frequent basis, but I’m pretty sure I can go through 52 selections in a year. I have no interest in getting a card game so I’ve already dismissed this week’s offer, but I can’t help be curious about what next week will bring.

We have contacted Google about this new promotion and will update you if we hear back.

Update at 9:10 p.m. Pacific: Article has been corrected to reflect that the Free App of the Week did not originate this week but actually started last week. Thanks for the tip Adrian!

Update on March 27: “We are always making improvements to Google Play to offer to the best service possible to our consumers,” a Google spokesperson told VentureBeat.

A source close to the company informed us that this is a four week pilot in the U.S. (even though it does appear to work outside the country if you follow the direct link). Either way, don’t get too accustomed to the promotion as it may not last more than a month.