Virtual reality still needs big blockbusters to get off the ground, and Oculus Studios hopes that its Wilson’s Heart psychological thriller will be one of them.

The virtual reality title from Twisted Pixel Games is for the Oculus Rift VR headset, and it makes full use of the Oculus Touch controls, which let you use your hands to open doors and take a swing at a frightening enemy.

The game has noir-like, black-and-white imagery, and it’s about a World War I veteran named Robert Wilson. It’s setting is hospital in the ’40s, where Wilson is a patient who awakens to the shocking discovery that his heart has been replaced with a metallic object. I played it at San Francisco’s Armory, which is spooky in its own right.

As the hospital hauntings intensify, you and your fellow patients must traverse increasingly maddening corridors, overcome frightening environmental hazards, and work together to defeat the sinister inhabitants in your pursuit to reveal who stole your heart and why. The developers has been working on it for two years, and it debuts in a few weeks.

The demo started about a quarter of the way through the game. I played as Wilson. When I reached out with my real hand, Wilson’s arm extended in the game. I used my real arm to a window in a hospital door, and I saw a huge creature dragging an unconscious nurse by her legs. They disappeared through a hole in the wall.

I moved around by teleporting, which means I pressed a button that took me to a predetermined spot in the landscape. Bill Muehl, the CEO of Twisted Pixel Games, told me in an interview that they opted for teleporting so that the motion wouldn’t make anyone sick, and so they could focus on doing interesting tasks at particular locations.

I went downstairs and teleported around, collecting objects. Some of those objects are important clues in the mystery. When I picked up an object, I placed it in my inventory by holding my hand up and making the object fit in a slot that outlined the item. One of the objects I picked up was a screwdriver.

The darkened hospital seem pretty frightening. But Muehl said the point wasn’t to make a horror game. Horror is full of things like “jump scares,” which are meant to make you scream in surprise. But Wilson’s Heart is more about the horror in your mind, as your nightmares come to life.

I did more physical tasks, like twisting my hand while trying to turn the dial for a combination lock. All of this dexterity testing mattered when I had to deal with my first monster. I had to put on some surgical gloves to avoid burning my hands when I reached into a bath tub. The tub had a black, acidic liquid in it. I reached down into the tub to pull out the plug, but the Oculus Rift lost track of my hands. I had to do this a few times before it finally recognized my arm gesture. 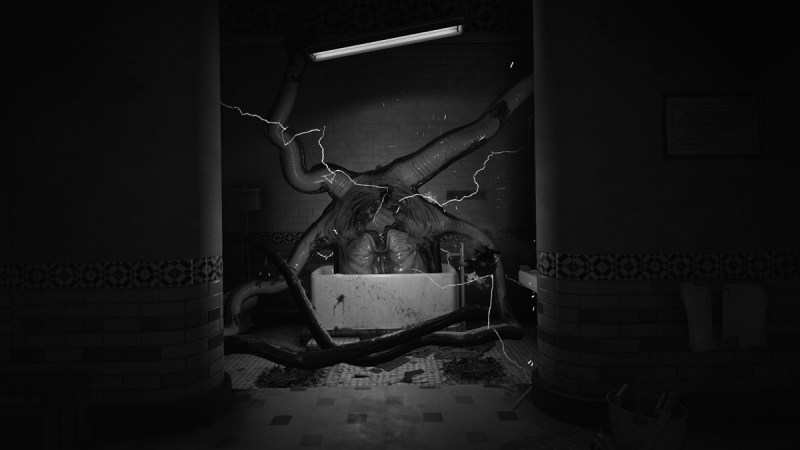 Above: This monster came out of the bathtub drain in Wilson’s Heart.

When I pulled the plug, a tentacled creature came out of the bathroom drain and attacked me. I had to pull out the screwdriver and hack at the tentacles that wound around my wrist. At first, I tried to throw the screwdriver at the creature, and it promptly ate me.

Then I had to go grab an electronic machine from another room and toss it into the gaping mouth of the tentacled creature. When that happened, the beast got electrocuted as it munched on the device. That didn’t make a lot of sense, but hey, it’s a game.

During the next part, Muehl showed me how to use my Heart Powers. One of these, The Wanderer, enables you to rip out the metallic heart from your chest and throw it at somebody to take them out. You perform this act by making a physical throwing motion like you really are tossing something.

I used it at one point to throw the metal heart at some disturbing creatures. They were basically people crawling on all fours who would fuse together to make a spider-like fiend. I had to throw the heart at them to take them out, and I could guide the path of the heart in mid-flight using my hand. 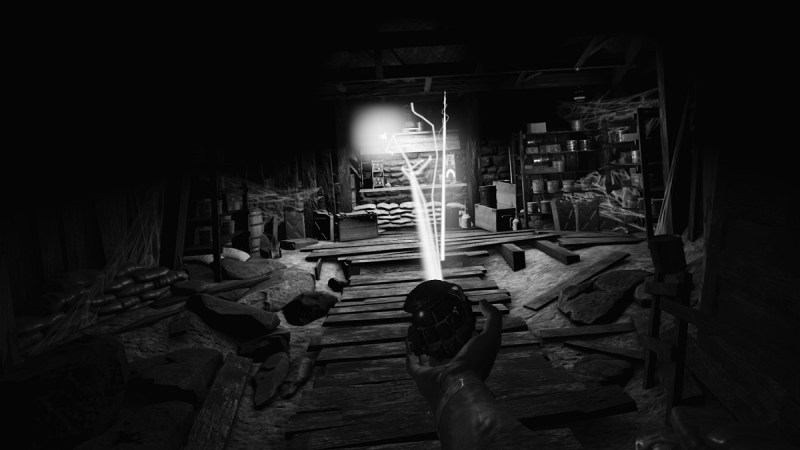 Above: The Wanderer Heart Power in Wilson’s Heart.

The heart flew out at them and returned, boomerang-style, and sometimes it took creatures out on the way back. I had to toss my heart at the enemies over and over, guiding the ball so it smashed into the beasts, one after another. It was breathtaking, as the creatures only had to reach me once to take me out. I was tired after that scene.

In the final scene, I unlocked a door to a room with padded walls, where the hospital probably kept mental patients. And as the scene unfolded, I had to wonder if my character was going nuts. I kept looking around for something to interact with. I took out my heart and threw it at a lightbulb, breaking it. Then a door fell down from the ceiling and started flopping around. I chuckled, not sure if the place was insane or I was.

A door opened, and I went through it. I came to a room with a big window, which looked in on the padded room. Two hospital workers were seated at the desks, and they were dead, killed by something that left horrendous wounds on them. I had to uncover more clues and picked up a crowbar. I approached a painting of flowers.

Then Muehl told me to push it. I did so, and it moved backward. The whole wall slid back, as if it were on rollers. I kept doing that. Finally, when it stopped, a Teddy bear with giant claws hopped out of the picture. He attacked me, and I had to punch back with my fists. As I did so, he kept getting more aggressive. I had to fight him off with vases, and finally I set the Teddy Bear on fire with a lamp. He still didn’t stop, and I finally had to get really violent with him.

After more puzzles, I unlocked a dial. When I twisted it, the room with the padded walls rotated sideways. I did that some more, and finally made a door appear in the ceiling. so naturally I went through it and ran into this ugly character below, who I had to take out with fists and grenades. 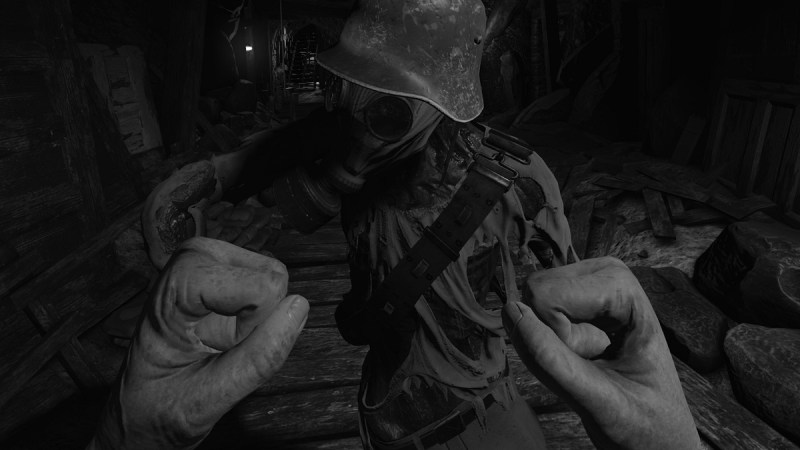 Above: You can box this bad guy with your fists using the Oculus Touch controls in Wilson’s Heart.

The score was creepy, too. It was created by Christopher Young, who composed scores for the original Hellraiser, Spider-Man 3, and Drag Me to Hell. Actor Peter Weller plays Robert Wilson, while Rosario Dawson plays Elsa Wolcott, and Alfred Molina plays Bela Blasco.

The game debuts on the Oculus Rift on April 25 for $40. The comfort rating is to be decided, but I felt fine while wearing the headset. It certainly is a scary, disturbing, and — in a dark humor sort of way — hilarious experience.

Here’s a video of my preview of Wilson’s Heart, with the exception of one section cut out where I had trouble grabbing a bath tub plug. You can hear Muehl in the background coaching me how to play the game.