Netgear believes that one size doesn’t fit all when it comes to home Wi-Fi networks. That’s why the company launched its Orbi Wi-Fi System in August and why it is now expanding it with additional models for smaller to mid-sized homes.

The Orbi Wi-Fi System was built with the understanding that your internet cable and computer aren’t always located in the center of your home. To compensate for that, the Orbi places one Wi-Fi unit where the internet comes into the home and another centrally to extend fast Wi-Fi access to more of the home.

But it also creates a dedicated 5-gigahertz, 1.7-gigabit per second channel between the base Orbi and the extended one, known as a satellite, so that you can get full internet access for devices that connect to the satellite Orbi unit. This could be very important for gamers, who often have game machines in dens or garages.

And it delivers maximum internet speeds no matter how many devices connect. That’s important, because the average broadband household has more than seven connected devices that can stream video, and emerging smart home devices are increasingly common, according to market researcher Parks Associates.

Netgear product manager Amit Rele said in an interview with VentureBeat that the Orbi family can address everything from apartments and lofts to big mansions.

“Everybody’s house is different,” Rele said. “So we are moving away from one-size-fits-all.”

San Jose, Calif.-based Netgear is introducing new form factors for Orbi that provide even more choice of style and greater flexibility of Wi-Fi placement. The RBK30 model includes an AC2200 router and wall-plug satellite designed to cover an area of up to 3,500 square feet. The RBK30 is a smaller device and can plug into a wall electrical outlet, making it ideal for hallways and kitchens.

And the RBK40 is a Orbi Tri-band Wi-Fi System that includes the AC2200 router and matching satellite, which are designed to cover property up to 4,000 square feet. 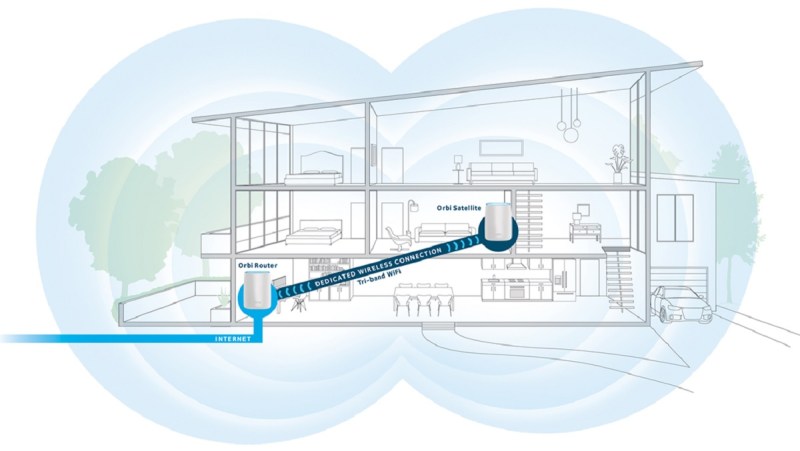 Above: Netgear’s Orbi extends the range and speed of Wi-Fi networks.

Orbi represents an innovation in Wi-Fi networks, which have become ubiquitous in homes but haven’t really changed as much as they could have in recent years.

Orbi comes pre-paired and configured and works with your internet service provider (ISP) right out of the box.