The first year of high-end virtual reality is over, and it’s a good time to look back at the best games for one of the major platforms in this sector

In March 2016, Oculus VR launched its Rift headset. We’ve now spent the last 12 months using and experimenting with the device, and the head-mounted display has started to put together a respectable library of fascinating experiences. Below, I’ve gathered together the 15 best games for the VR device.

Go ahead and check it out: 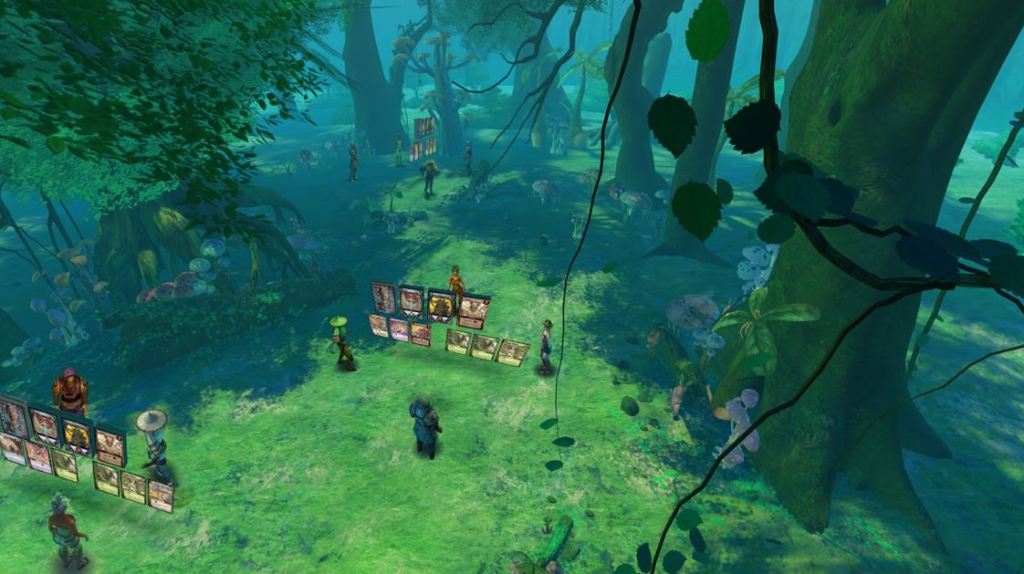 Above: Ascension VR for the Oculus Rift.

The problem with deck-building games is that you have to keep the cards handy when you come across someone willing to play. With virtual reality, your cards can live in the cyberrealm along with everything and everybody else. Ascension VR enables you to take advantage of that, and it also recently got a Oculus Touch update so you can manage your cards in a more natural way.

Rhythm games might seem like they peaked with Guitar Hero and Rock Band a generation of consoles ago, but VR has given interactive music new life. Beats Fever pelts you with music notes similar to the Steam VR game AudioShield. Jumping into a world where your music comes to life is still mind-blowing, and Beats Fever captures that.

VR has a massive amount of potential when it comes to education, and Apollo 11 VR is evidence of how that might work. This game/experience gives you the chance to relive the Apollo 11 landing — and not as an observer or civilian, but as one of the three humans who went to the moon.

Ad1ft was an early VR launch, and it’s still one of the better narrative-based games. It has you working your way through a zero-G space station where your oxygen is always about to give out. It’s intense and beautiful.

Developer CCP Games has always wanted to make VR games. When Oculus Rift came along, the company jumped at the chance with its space flight sim Eve: Valkyrie. This is a competitive shooter, where you take on other people in their X-wing-like fighters. While it has solid core mechanics, CCP has also regularly updated the game to keep it fresh and interesting since it launched last March.

One of VR’s biggest success stories is developer Owlchemy Labs’ Job Simulator, a comedic puzzle game where you mess around in the simulacra of today’s jobs in the year 2050 — a time when machines do all the work. Job Simulator stands out due to its humor and by giving you a variety of fun spaces to play in.

I Expect You To Die takes the Job Simulator format, where you have interesting spaces to play around in, and puts a bit more of a structure on top of it along with a spy theme. You go on missions in small, contained areas, and you have to look around and try to figure out what you can use to accomplish your goals. It cleverly uses both traditional point-and-click adventure-game elements as well as the new capabilities of VR, like enabling you to reach out and grab things with your own hands.

Developer Crytek built The Climb as a showpiece for how well its Cryengine tools work for VR, but the game is also a lot of fun. It’s about climbing mountains by placing your hands on predetermined holds. You can play with a controller, and that works — but the game really came together when Crytek updated it to support the Touch controllers. Now, it’s a wonderful, arcade-style climbing sim and something of a workout.

VR is at its best when it enables you to exist in physical spaces, and one of the most impressive Rift games for this is Kingspray. This game gives you endless, customizable bottles of spray paint and leaves you free to do whatever you want in back alleys or around an old, abandoned truck. Having the satisfying physicality of using your body to reach out and spray paint just as you would in real life combined with the options to undo mistakes or to pick from any color you could want opened my eyes to some of the creative possibilities for VR.

Physicality also makes the puzzle game Fantastic Contraption amazing. Your goal in this game is to get a red ball into a glowing rectangle. To do that, you have to build devices from gears, motors, and wheels, and sticks. But it’s not just about designing something, it’s about using your hands to go in and build these things that sets Fantastic Contraption apart.

AirMech: Command was a Rift launch game that shows the potential for the strategy genre in VR. Instead of peaking through a narrow window at the playfield, AirMech enables you to quickly look over the entire battle as if it were happening on a giant table right in front of you. This is one game (and an idea) that I want to see a lot more of in VR.

One of the coolest games of 2016, Thumper is another rhythm action game. Its pounding, percussion-heavy score comes together with brain-shattering visuals to assault all of your senses, and that is only amplified in VR.

VR needed its Wii Sports, and VR Sports Challenge is definitely in that vein. The game enables you to play hockey, football, and basketball with the Oculus Touch controllers. It’s very satisfying to throw a pass, go into slow motion, and then catch that pass as the wide receiver. It’s also another great workout game.

2) Keep Talking and Nobody Explodes

Keep Talking and Nobody Explodes is an essential VR party game. It’s a game where one person in the Rift tries to disarm a bomb, but they can’t understand the strange symbols and puzzles on the explosive device. To figure out the problems, they have to communicate with everyone else in the room who are all looking at a bomb-disarming manual. Survival comes down to how well everyone in the room can explain and comprehend one another … which gets more difficult when you’re drinking.

Superhot VR is phenomenal. It looks cool, and it’ll make you feel cool. In this spinoff of the PC game, you end up in a series of scenarios where time only moves when you do. That means if you move your head or the Touch controllers in your hand, enemies will rush you and bullets will zoom toward you.

But if you stay still, everything will come to almost a complete halt and give you the time you need to observe your situation. Then you can come up with a strategy where you throw an ashtray at the gunman on your right. Once he’s done, you can grab his gun out of midair to take out the two henchmen with Uzis on the left. Finally, you can throw your weapon — which is now out of ammo — at the last dude coming around the corner with a knife.

It’s as cool as it sounds, and it is easily the top must-have game on the Oculus Store.