Specifically, costs per purchaser fell 43 percent, resulting in the best value for performance seen in more than a year. Cost per purchaser on iOS fell by 2 percent in February, compared to January. CPP is cost per purchaser, which refers to the incremental cost of each user that makes a purchase.

“Analysis of the real-time bidding market in February shows a clear distinction between iOS and Android. Android is still the platform with more volatility compared to the more mature iOS marketplace,” said Tom Cummings, vice president of new market development at Fiksu DSP, in a statement.

He added, “If the trend we see on Android continues, February’s cost per purchaser numbers should embolden mobile game publishers to continue spending their ad dollars on Android.”

While a maturing market like Android is susceptible to greater fluctuations in CPP and CPM from month to month, the big change in February was likely due to a confluence of several factors. For one, marketers were ramping down holiday-related spend. 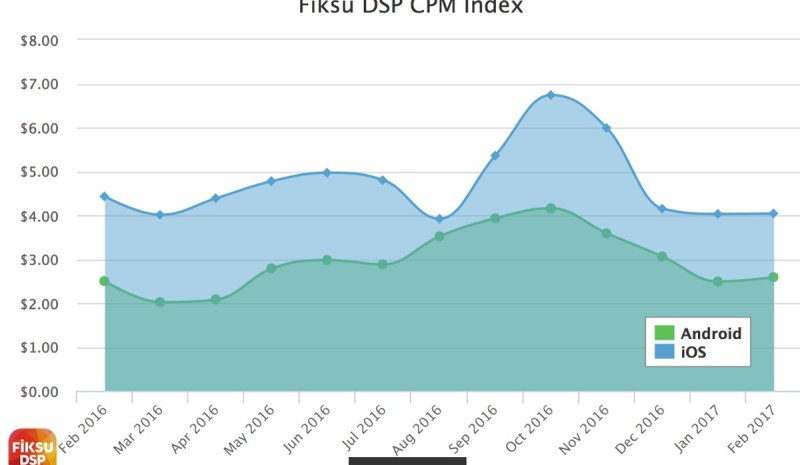 Above: User acquisition costs are roughly flat for mobile apps.

“For many mobile marketing campaigns, the months after the holidays have represented one of the best periods to acquire new users, as ad spend drops off but users are still very engaged with their new devices,” said Matthew McGinty, chief revenue officer at Fiksu DSP, in a statement.

While seasonal spending may have contributed to this drastic change, part of the 43 percent decrease can likely be credited to actual campaign effectiveness.

“As Android matures and reaches parity with iOS, marketers are proving to be savvier at reaching the right kind of users through techniques like look-alike targeting,” said Cummings. “The drop in CPP across both platforms in February could be telling us a lot, but a more definitive story will start to unfold once we begin seeing results from March and April.”

With several Android-related events on the horizon, including an anticipated Galaxy 8 release in late April and Google’s I/O conference in May, the next few months will be busy for marketers. Having revealed that new iPads being tested around the Apple campus this March, Fiksu is continuing to monitor its data for indications of other new devices that might impact the RTB marketplace.

“Anytime a new device drops, it affects the marketing strategy,” said McGinty. “Even with the fragmented Android ecosystem, new Android releases are also worth tracking and targeting.”