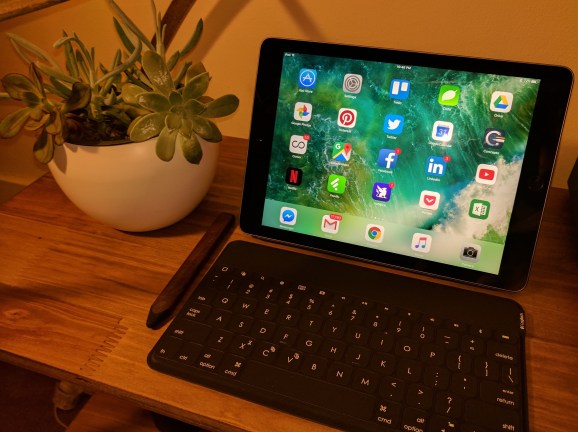 The numbers for the iPad aren’t good. Revenue and unit sales were both down again, as usual. But that does not mean Apple has given up on its tablet.

First Apple fleshed out the product line with two high-end iPad Pro models. Now it has gone and built a low-end version, with a fairly big 9.7-inch screen, a recent A9 chip, and a minimum of 32GB of storage.

Most importantly, it’s got a low, low starting price: $329. That price is so important to the identity of this product that it’s mentioned on its online product description page as if it were a feature. The only other modern Apple device that has that characteristic is the MacBook Air, which was last updated two years ago and now serves as the bottom of the Mac laptop lineup, given the arrival of the 12-inch MacBook and the MacBook Pro with Touch Bar.

Apple ran this same playbook last year, when it introduced the iPhone SE, a throwback to the cute 4-inch 2013 iPhone 5S. The SE, at $399, is the poor man’s iPhone, if such a thing is possible. Demand exceeded supply for the first two quarters following its release, suggesting that people had been eager for a cheaper Apple phone for some time.

Now we have the 2017 iPad, which looks essentially the same as the iPad Air 2 from 2014. Generally speaking, it has performed well for the price in my early testing. Is it as zippy as the iPad Pro? No. Can you use the great Apple Pencil and Smart Keyboard with this thing? No. Does it come in rose gold? Nah.

What you have here is a good enough iPad available on the cheap. Apple wouldn’t be coming out with this product if it didn’t think the value proposition would resonate. The iPhone SE has succeeded in getting people to switch from Android, and this new iPad could do the same.

And it’s not only that. Particularly in the education market, which Apple has focused on with the Mac in the past, the new iPad could take some market share from Chromebooks. Google’s partners have put out many low-end models, and now Apple has a better response to that challenge.

Regardless of whether you’re in the classroom, though, a lower-priced iPad could make you more willing to spend money on accessories, like cases, keyboards, and stylii — because the price of everything simply won’t be as staggeringly high. That might be exactly what Apple wants.

The question is whether this is all enough to make the iPad business grow beyond its high point in 2013.