Richard Garriott, Ultima creator and astronaut, will receive the top honor at the Spanish Academy of Interactive Arts and Sciences’ Gamelab event in Barcelona.

The academy, a cultural institution devoted to the improvement of a growing creative sector of over 400 companies and 4,000 professionals, is giving its Honorary Award to Garriott at the event this year in late June.

The new president of the Academy, Xavier Carrillo-Costa, stated that the members of the institution agreed on recognizing “Garriott’s influential contributions to the evolution of the games medium and his important role in the Industry for setting the bases of the massive multiplayer role-playing genre with games and series like Ultima and Ultima Online.”

Ivan Fernandez-Lobo, founder and chairman of Gamelab Barcelona and former president of the Spanish Academy of Interactive Arts and Sciences, said in a statement, “The British-American designer and entrepreneur is truly a game-changer for the medium and a source of inspiration for anyone with a creative soul, even beyond the Industry limits.”

Fernandez-Lobo also highlighted “the influence of Garriott’s adventurer spirit in the games he designed and the companies he founded.”

Garriott will participate in a Q&A session during the award presentation and offer an exclusive masterclass on intellectual property development to the attendees of this year’s conference.

Richard Garriott de Cayeux (born in Cambridge, England, in 1961) is a founding father of the videogame industry and the commercial spaceflight industry.

He has been inducted into the computer gaming hall of fame and has received the industry lifetime achievement award. He is credited with creating the now ubiquitous term “avatar” for one’s virtual self and the category of massively multiplayer online role-playing games (MMORPGs). 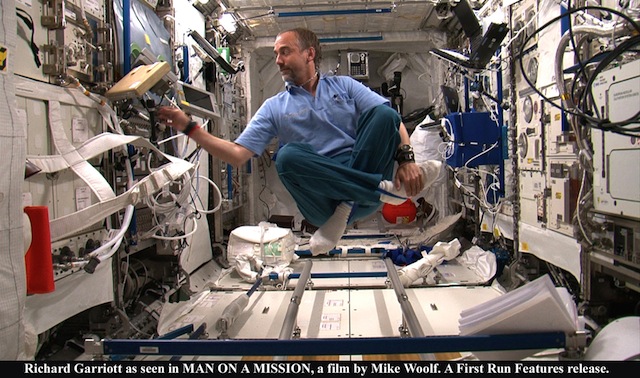 Above: Richard Garriott floating inside the ISS.

He authored the acclaimed Ultima Series and has built 3 leading gaming companies: Origin Systems (sold to Electronic Arts), Destination Games (sold to NCsoft), and Portalarium where he is building Shroud of the Avatar, the successor to his previous works.

As a principle shaper of the commercial spaceflight industry, he cofounded Space Adventures, the only company to arrange space flights for private citizens and is the sixth private astronaut to live aboard the International Space Station. The son of a NASA astronaut, he became the first second-generation astronaut and has been a key leader in civilian and commercial space as an investor and board member of institutions such as the X-Prize Foundation, Space Adventures, and Planetary Resources.

Garriott is also an avid explorer, having traveled around the globe from the jungles of the Amazon to the South Pole, the deep seas of the Titanic and hydrothermal vents to orbiting the earth aboard the International Space Station. His non-profit and philanthropic works include serving on the boards of The Explorers Club and The Challenger Center for Science Education. His new book, “Explore/Create” chronicles his life from the early days of video gaming, through his spaceflight and to the present day.

Garriott joins with this award an exclusive list of games industry influencers distinguished in the Spanish event, including names such as Toru Iwatani, Hideo Kojima, Will Wright, Hironobu Sakaguchi, Peter Molyneux, and Mark Cerny.