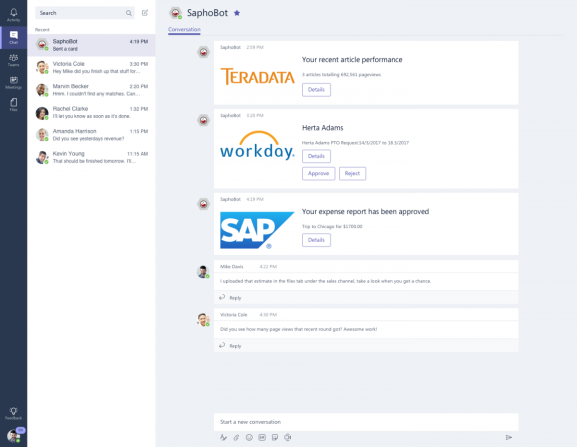 Sapho will soon launch a Microsoft Teams bot, the company has informed VentureBeat.

Due out next week, the Sapho bot for Microsoft Teams will combine multiple software systems into a single bot that provides actionable insights that can be completed with the tap of a button. Custom settings means you can create alerts when those systems detect a significant event, like too many Salesforce customer tickets or a big deal just getting signed.

“We sit inside our customers’ infrastructure and we integrate into all their different systems of record, whether that’s a JD Edwards or an SAP or an Oracle EBS or IBM Domino or Salesforce, we make it easy for people to build an event on top of that,” Sapho cofounder Fouad ElNaggar told VentureBeat in a phone interview. “Then a notification goes out and they can do tasks like approve PTO or look at how salespeople are doing against quota or sign a contract. All these different workflows, we unbundle them from these big monolithic systems of record and bring that to the end user.”

The company unveiled the service it calls micro apps for chat platforms like Slack last June.

Since its launch, Sapho has been integrated with 60 different legacy enterprise software systems from SAP, Oracle, IBM Domino, and various cloud products. By bringing tasks and multiple enterprise systems into a single chat window, Sapho aims to provide a simple and familiar environment for work.

The company hopes its service is something people find practical value in every day.

“For us, if people aren’t using the micro apps on a daily basis, we haven’t done our jobs,” ElNaggar said. 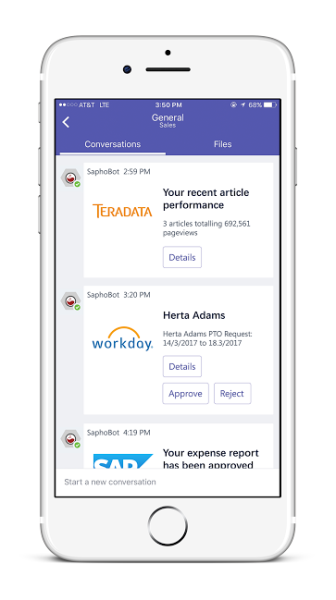 Cofounders ElNaggar and Peter Yared left CBS Interactive in 2014 to create Sapho. Sapho completed a $9.5 million series A round last January and has raised $13.5 million.