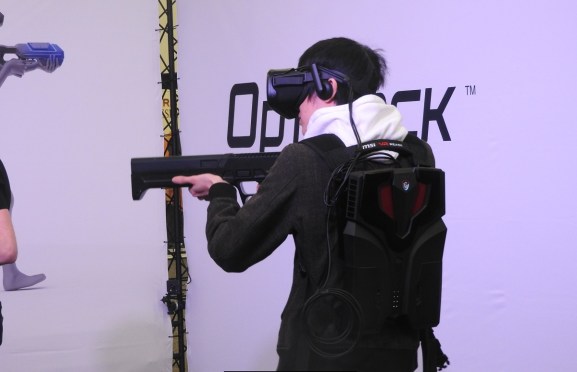 When you suit up for an OptiTrack demo, it feels pretty serious. First, the demo guy puts a very heavy machine gun in your hands. Then, he straps a backpack with a big battery onto your back. And then, you put on a VR headset.

I tried out the OptiTrack Active demo at the recent SVVR event in San Jose, Calif., and it was perhaps the most realistic experience I’ve had in a shooting game in VR. The demo used the OptiTrack technology with the Oculus Rift VR headset, a Striker VR faux assault gun, and an MSI VR One backpack PC. The setup was fairly heavy, and by the end of the demo, my arms were getting tired.

OptiTrack is targeting the concept for theme park VR experiences or VR arcades — like those that are popping up around the country and in places like China and Japan.

The Striker VR gun weighed about six pounds, and it had a pop to it. The haptic feedback on the weapon made me feel like I was shooting a real gun. Fortunately, the demo was pretty tame. I was shooting at big colored balls that were coming at me at high speeds. I had to shoot them accurately to make them blow up into balls of paint. I had no wires that could get me all tangled up.

It was a great experience. I spun around and fired. I could aim down the sights, or I could shoot from the hip. Even shooting from the hip was pretty accurate since there was really no latency, or delay, in firing. I could adjust my aim quickly and zero in on my target within a shot or two.