The PC market’s woes still seem to have no end in sight: It has now been in decline for 10 quarters in a row, per at least one research firm. For Q1 2017, Gartner found PC shipments were down globally, while IDC concluded they were flat.

In Q1, the top six vendors were Lenovo, HP, Dell, Asus, Apple, and Acer. As you can see in the chart below, Gartner found that in the top six, only Asus and Acer experienced a decrease in PC shipments. The rest of the market was down 12.0 percent.

Gartner explained that while the PC industry experienced modest growth in the business PC market, these gains were offset by declining consumer demand. While companies are still replacing what they see as their main work devices, individuals refrain from replacing older PCs or have abandoned the PC market altogether.

IDC, meanwhile, estimates worldwide PC shipments were up 0.6 percent to 60.3 million units in the first quarter. The top five vendors in IDC’s results were HP, Lenovo, Dell, Apple, and Acer.

IDC found that all the big companies were up this past quarter, but does agree with Gartner that the remaining smaller companies suffered a double-digit drop (11.4 percent). The exact numbers, for your perusal: 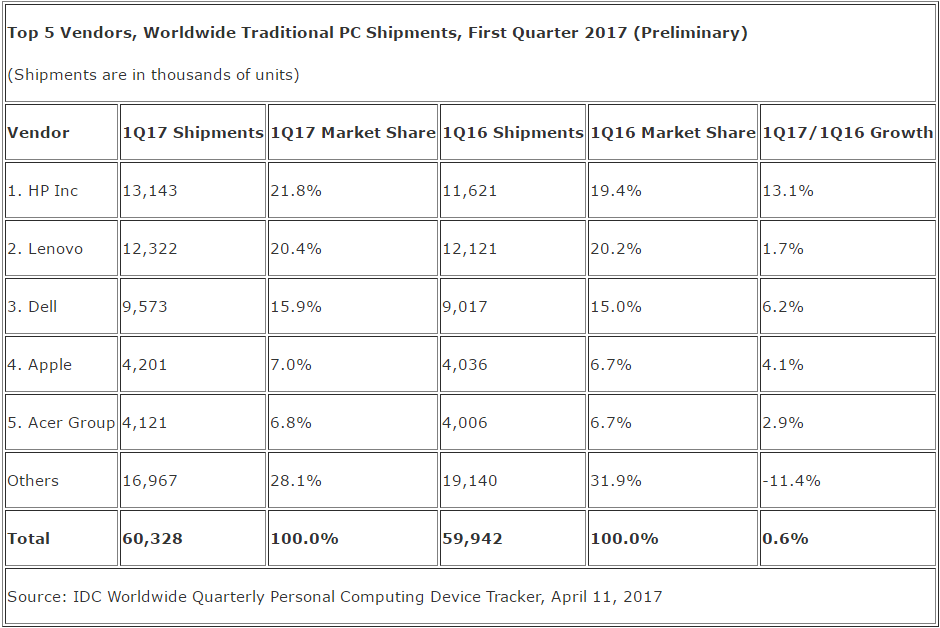 IDC concludes that these results are positive, since this is the first rebound it has measured since Q1 2012. The firm notes that was a time when many users still considered PCs their first computing device.

Gartner and IDC analysts have pointed to a variety of factors causing this steady decline, but there’s only one that remains every quarter: The PC simply isn’t as in-demand as it once was.

“While the consumer market will continue to shrink, maintaining a strong position in the business market will be critical to keep sustainable growth in the PC market. Winners in the business segment will ultimately be the survivors in this shrinking market,” Gartner principal analyst Mikako Kitagawa said in a statement. “Vendors who do not have a strong presence in the business market will encounter major problems, and they will be forced to exit the PC market in the next five years. However, there will also be specialized niche players with purpose-built PCs, such as gaming PCs and ruggedized laptops. The top three vendors — Lenovo, HP and Dell — will battle for the large-enterprise segment. The market has extremely limited opportunities for vendors below the top three, with the exception of Apple, which has a solid customer base in specific verticals.”

“The traditional PC market has been through a tough phase, with competition from tablets and smartphones as well as lengthening lifecycles pushing PC shipments down roughly 30% from a peak in 2011,” IDC research manager Jay Chou said in a statement. “Nevertheless, users have generally delayed PC replacements rather than giving up PCs for other devices. The commercial market is beginning a replacement cycle that should drive growth throughout the forecast. Consumer demand will remain under pressure, although growth in segments like PC Gaming as well as rising saturation of tablets and smartphones will move the consumer market toward stabilization as well.”