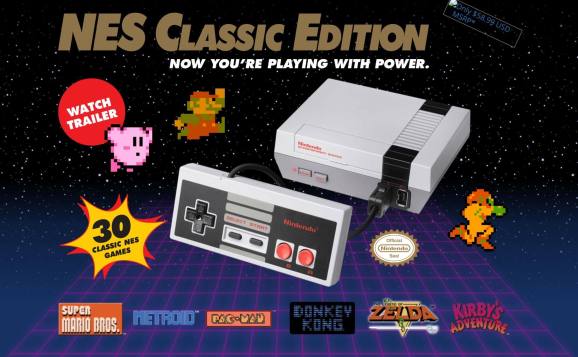 Now you're playing with power.

If you want an NES Classic Edition, you better get one soon.

Nintendo is discontinuing the popular but hard-to-find retro console, as IGN first reported. The company confirmed this with GamesBeat in an email. The NES Classic edition is a miniature version of Nintendo’s first console, the Nintendo Entertainment System. It comes with 30 games, including nostalgic hits like The Legend of Zelda, Super Mario Bros., and Mega Man 2. When it released last November, it immediately became a hot item. Nintendo was caught off guard by the system’s popularity.

Still, people assumed that at some point Nintendo would be able to make a decent stock of the systems. That never happened, and now the console is going away.

“Throughout April, NOA [Nintendo of America] territories will receive the last shipments of Nintendo Entertainment System: NES Classic Edition systems for this year,” Nintendo told GamesBeat. “We encourage anyone interested in obtaining this system to check with retail outlets regarding availability. We understand that it has been difficult for many consumers to find a system, and for that we apologize. We have paid close attention to consumer feedback, and we greatly appreciate the incredible level of consumer interest and support for this product.”

Nintendo elaborated to IGN, noting that it never intended the NES Classic Edition to be a long-term product. It had already produced more systems than it intended, but it’s now done.

Logically, it seems like Nintendo is leaving money on the table. Now, people selling second-hand NES Classic Edition for marked-up prices are the ones that’ll see big profits. Why wouldn’t Nintendo want to make more when it has no problem moving them?

Maybe its working on a new system that will make the NES Classic Edition obsolete, like an NES Classic Edition 2.0 that has more games and features. Or maybe Nintendo is worried that the retro system can cut into its business of selling digital copies of its old games on new systems via the Virtual Console store (we still haven’t heard about Nintendo’s Virtual Console plans for the Switch).

Whatever the reason, it’s a bummer for Nintendo fans who haven’t been able to find an NES Classic Edition yet.